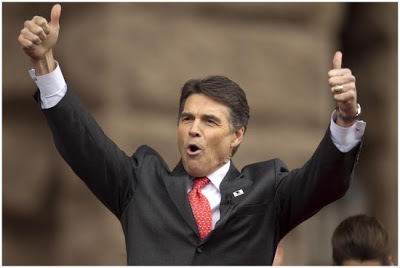 Texas leads the nation in the number and proportion of people making minimum wage or less.

AUSTIN — On Monday, Texas Gov. Rick Perry appeared via satellite on Fox News’ Glenn Beck Show — this time sticking around longer than his 35-second in-person cameo on the program two weeks ago — to tout the Texas economy and job creation numbers, his prime talking points as of late.

Beck, whose television program is set to end Thursday, prefaced the interview by lauding Texas for generating 37 percent of all new post-recession U.S. jobs since June 2009. Both he and Perry avoided mentioning the state’s structural budget deficit, sweeping cuts to health services and public education, and its surge of low-wage jobs, as noted by the Texas Independent.

Aside from the lack of a state income tax and Perry’s push for tort reform, neither the host nor guest paid much attention to other variables that could have influenced the job creation numbers, such as Texas’ natural resources, energy and high-tech industries, successful Gulf port business, and trade with Mexico and China, all factors pointed to by Pia Orrenius, a senior economist at the Dallas Federal Reserve — the source of the 37 percent figure (via PolitiFact Texas).

Referencing a critical story in TIME Magazine’s Swampland, Beck asked Perry to assess the idea that he is a “master at the theater of job poaching” from other states like California and New York, to which Perry replied, that is what the “Founding Fathers had in mind with the Tenth Amendment.”

The TIME article recounted a trip Perry made to California last November in which he “crowed that he had stolen 153 businesses from the Golden State in 2010; some 92 companies moved the other way, leaving Perry with a net gain of 61 businesses.”

A CNN opinion piece, written by a former Dallas Morning News columnist, calls the “Texas miracle” a mere “mirage.” In it, state Rep. Joaquin Castro (D-San Antonio) says many of those highly touted jobs went to people moving to Texas in order to take those jobs, and therefore, fail to raise the employment rate of native Texans:

“That jobs thing is a sleight of hand,” Castro said. “More than half of those new jobs have been filled by non-Texans. So it’s people moving here to take those jobs. It underscores this bipolar state that we live in. You have a population in Texas that is generally lower educated, poor, isn’t covered by health insurance… all of these things… so you can recruit these companies to come here from out of state but your own people, often times, aren’t qualified to fill these jobs.”

The way that Castro sees it, this is all about long-term investment and conflicting priorities.

“We’re not creating a system that educates them well and prepares them,” he said. “We underinvest in these things, which is what Perry is doing in public education and higher education. We can create the jobs, and that’s great. But our own people who have gone through Texas schools and Texas universities aren’t the ones filling them.”

When Beck brought up the TSA “anti-groping” bill, added to the special session call by Perry, the governor took to the opportunity to voice his disapproval of federal employee-led unions:

Beck: Are you concerned at all about the organizing of the airport workers by the AFL-CIO? The security, homeland security?

Perry: Sure. I think anytime you have federal employees being unionized, I have a real problem with that. You don’t have to look much further than what we have already that those federal agencies, or the federal employees that are unionized at the end of the day, it’s not in the best interest of the citizens, certainly the citizens who aren’t part of the union.

As a “right-to-work” state, employees in Texas cannot be required to join unions upon employment. The classification is seen by opponents as a means to deter from collective bargaining, a way to dilute unionization and prevent employees from securing higher paying jobs.

According to a report by the Economic Policy Institute, the “right-to-work” law — because it decreases wages and benefits, weakens workplace protections, and minimizes the likelihood that employers will be required to negotiate with their employees — “is advanced as a strategy for attracting new businesses to locate in a state.”

The report’s analysis of Oklahoma, the most recent state to enact a “right-to-work” law, also found evidence that the laws could actually hurt the economic prospects of states looking to branch out from traditional or low-wage manufacturing jobs into areas such as high-tech manufacturing or “knowledge” sector jobs.

Referring to reporting by the Associated Press, Media Matters for America also notes:

Although Beck cited Texas’ AA+ rating from S&P, he neglected to mention that Texas is “unlikely to receive the top AAA rating because lawmakers have not addressed a structural deficit created by an underperforming business tax.”

Beck joked that he is considering moving to Texas and toyed with the idea of running for Perry’s spot, if he decides to make a presidential bid, saying,

You know, Rick, I mean this sincerely. And I know that you’re considering possibly running for president of the United States. And I’m considered possibly moving to Texas. I don’t know who your lieutenant governor is, but I am thinking that we’re not going to let you leave Texas. I mean, I could run for governor of Texas, I’m just saying.

Political observers expect current Lt. Gov. David Dewhurst to announce soon that he will campaign for the U.S. Senate seat to be vacated by Sen. Kay Bailey Hutchison.

[Mary Tuma is a reporter for The Texas Independent and will be contributing regularly to The Rag Blog. A graduate of the University of Texas School of Journalism, Tuma has worked for The Houston Chronicle, The Texas Observer, and Community Impact Newspaper. She is in the process of obtaining her master’s degree in media studies from UT-Austin. Born and raised in Houston, she now calls Austin home. This article first appeared at The Texas Independent.]