May Day in Europe : Protesters Clash with Riot Police 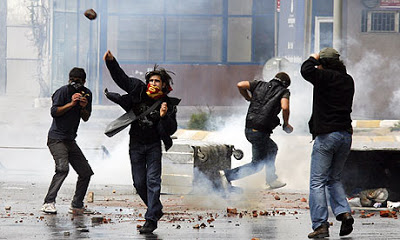 Protesters throw stones at riot police during a May Day rally in Istanbul. Photo by Osman Orsal / Reuters.
Giant demonstrations in France; battles with police in Turkey, Greece and Germany

May Day protesters clashed with riot police in Turkey, Greece and Germany yesterday while French unions led their biggest ever Labour Day demonstrations amid growing public anger in Europe at unemployment and the handling of global economic crisis.

Turkey’s May Day demonstrations were marred by violence for the third year running as police battled to stop protesters reaching Istanbul’s landmark Taksim Square. Riot officers fired water cannon and teargas canisters in clashes with leftwing demonstrators, some of whom hurled stones and Molotov cocktails and smashed the windows of banks and shops. There were at least 26 arrests and 11 police officers were reported injured.

Some of the worst violence took place in side streets. In the fashionable Cihangir neighbourhood near Taksim, protesters were seen placing large plant pots on the road to use as barricades against police vehicles.

The protesters had been seeking to join an estimated 2,000 trade unionists who had been given permission to hold a rally in Taksim for the first May Day since 1977, when 37 people died after unidentified gunmen opened fire on demonstrators. That event triggered political violence and was seen as a turning point that led to a military coup three years later.

The Turkish government last week bowed to pressure to declare May Day a public holiday and allow limited access to Taksim Square following criticism that police heavy handedness aimed at cordoning it off had been responsible for violence at last year’s event.

In Berlin and Hamburg, scattered violence erupted in the early hours of the May Day holiday. More than 50 ­people were detained in Berlin after demonstrators chanting anti-capitalism slogans threw bottles and stones at riot police and torched five cars, 48 police were injured.

France saw a record number of almost 300 street demonstrations with union leaders marching as a united front for the first time since the second world war.

Public support for the marches was over 70% as tension rises over unemployment, factory closures and mass lay-offs. The demonstrations were France’s third national protest over the handling of the economic crisis in four months. Unions will meet on Monday to decide whether to organise a further general strike.

As civil unrest by workers becomes more radical, with gestures such as “bossnapping” and vandalism, the former prime minister Dominique de Villepin has warned of a “revolutionary risk” in France. In one poll yesterday for Challenges magazine, 66% people felt there was a risk of “social explosion” in France over the coming months.

Thanks to CommonDreamsThe Rag Blog

This entry was posted in RagBlog and tagged Direct Action, Europe, Labor Unions, May Day, Social Protest. Bookmark the permalink.