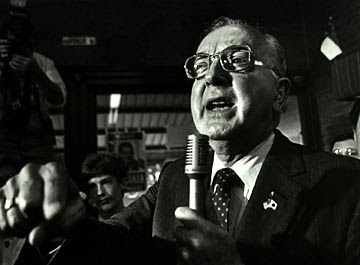 Senator Jesse Helms, campaigning in Lenoir, North Carolina for the first time as a politician, spoke inside an old storefront for ten minutes before leaving town in his motor home. Photo: “Jesse” (1991) by Spencer B. Ainsley.
The connection is Charlie
By Harry Siegel / July 4, 2008

From the right, Reagan biographer Craig Shirley remembers (Jesse) Helms as the man who made the Reagan revolution possible:

If Helms accomplished nothing else in his life, he is the man most responsible for the election of Ronald Reagan in 1980. Had Helms not engineered Reagan’s stunning upset win in the North Carolina primary in 1976, Reagan would have dropped out and faded into oblivion. Reagan staged a furious comeback as a result, losing the nomination to Gerald Ford by only a handful of delegate votes. As a result, Reagan became the front-runner for the 1980 nomination. None of this would have been possible without Helms. One man simply decided to change history.

And from the other side of the aisle, here’s a nice bit of quickly Nexised oppo from the proverbial sources-who-have-requested-to-remain-nameless recalling McCain chief strategist Charlie Black’s work for Helms, and tying him to some of the former senator’s more racially charged, to put it nicely, campaign tactics. Here’s the full memo, which was sent our way with the remark, “The connection is Charlie.”

The Washington Post reported, “‘It’s a tremendous victory for conservatives,’ Helms’ strategist Charles Black said. ‘It enhances his clout and influence in the Senate in the eyes of the press and his colleagues. He’ll be even more effective than he has been.’” [Washington Post, 11/8/84, emphasis added]

Black and Helms Used “Racist Appeals” to Win. Politics reporter Bill Peterson wrote in The Washington Post, “Lesson: A vicious new electronic form of negative politics has evolved and matured. And it is frightening. It is a politics of distortion, half truths and character assassination. Ends are used to justify means. Truth often takes a back seat. … Helms and the National Congressional Club, a political action committee run by his allies, had used negative advertising long before the Senate race began. … Racial epithets and standing in school doors is no longer fashionable, but 1984 proved that the ugly politics of race are alive and well. Helms is their master. A case in point was the pivotal event of the campaign: Helms’ filibuster against a bill making the birthday of the late Martin Luther King Jr. a national holiday. … Helms campaign literature sounded a drumbeat of warnings about black voter-registration drives. His campaign newspaper featured photographs of Hunt [his opponent] with Jesse L. Jackson and headlines like ‘Black Voter Registration Rises Sharply’ and ‘Hunt Urges More Minority Registration.’ Helms shamelessly mined the race issue.” [Peterson, Washington Post, 11/18/84, emphasis added]

As He Ran Controversial “Hands” Ad Against Black Candidate. Newsday reported that Helms, “through a series of blistering advertisements unleashed just days before, had beckoned the long-simmering issue of race to the surface of this senatorial contest. In doing so, Helms had hurled the campaign into its most bitter and acrimonious phase to date, namely by labeling his opponent, falsely, an advocate of racial job quotas and accusing him of conducting a ‘secret campaign’ in the black community. … On the television commercial, the camera zones in on a white man’s hands, crumpling what apparently is a job rejection letter. The announcer then intones: ‘You needed that job and you were the best qualified. But they had to give it to a minority because of a racial quota. Is that really fair? Harvey Gantt says it is,’ the message continues. ‘Gantt supports Ted Kennedy’s racial quota law that makes the color of your skin more important than your qualifications.’” Black, an adviser to the campaign and a consultant for the Congressional Club — Helms’s political machine — insisted the race would come down to turnout: “‘What it’s going to come down to is turnout,’ said Charles Black, chairman of the Republican National Committee and a Helms adviser. ‘It’s, no question, the biggest challenge at this point.’” [Newsday, 11/4/90]

Black defended Helms’s “Hands” television ad, which featured white hands crumpling a job rejection letter and linking Helms’s black opponent to racial job quotas. Asked about the ad on the MacNeil/Lehrer Newshour, Black said, “Well there is nothing racial about the campaign.” When asked if there was anything improper about the ad, Black said, “Of course not.” Another guest on the show, DNC Chairman Ron Brown, pressed Black again, saying, “You are a principal adviser of Jesse Helms. Would you advise him to run that kind of ad, Charlie? Do you approve of that ad, Charlie?” Black responded, “I advised Jesse Helms to do what he’s always done.” [MacNeil/Lehrer Newshour, 11/5/90]