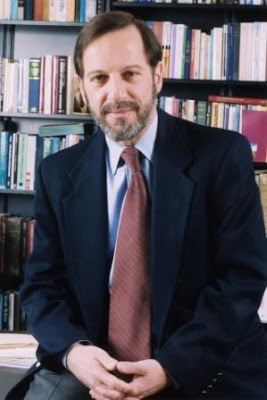 ‘He is a distinguished scholar, and the only objectionable thing about him from a rightwing point of view is that he is a Palestinian.’
By Juan Cole / October 30, 2008

The increasingly sleazy John McCain, who once promised to run a clean campaign, has now attacked my friend Rashid Khalidi and attempted to use him against Barack Obama. Khalidi is an American scholar of Palestinian heritage, born in New York and educated at Yale and Oxford, who now teaches at Columbia University. He directed the Middle East Center at the University of Chicago for some time, and he and his family came to know the Obamas at that time. Knowing someone and agreeing with him on everything are not the same thing.

Scott Horton has a fine, informed and intelligent discussion of the issue. Likewise Barnett Rubin (“My Friend the Neo-Nazi”) and Chapati Mystery suddenly alarmed about the Hyde Park crowd.

I know it may seem a novel idea to people like McCain and Palin, but it would be worthwhile actually reading Khalidi’s book on the Palestinian struggle for statehood. (I urge bloggers interested in this issue to link to his book, which the American reading public should know).

At the least, read a whole essay Khalidi has written.

Far from being a knee-jerk nationalist, Khalidi has been critical of the decisions of the Palestinian leadership at key junctures in modern history.

McCain’s and Palin’s attacks on Khalidi are frankly racist. He is a distinguished scholar, and the only objectionable thing about him from a rightwing point of view is that he is a Palestinian. There are about 9 million Palestinians in the world (a million or so are Israeli citizens; 3.7 million are stateless and without rights under Israeli control in the West Bank and Gaza; and 4 million are refugees or exiled in the diaspora; there are about 200,000 Palestinian-Americans, and several million Arab-Americans, many living in swing vote states). Khalidi was not, as the schlock rightwing press charges, a spokesman for the Palestine Liberation Organization. He was an adviser at the Madrid peace talks, but would that not have been, like, a good thing?

Much of the assault on Khalidi comes from the American loony Zionist Right, which quietly supports illegal Zionist colonies in the West Bank and the ethnic cleansing of the remaining Palestinians. They have been tireless advocates of miring the US in wars in Iraq and Iran to ensure that their dreams of ethnic cleansing are unopposed. They are a tiny, cranky but well-funded group that has actively harassed anyone who disagrees with them (at one point, cued by Daniel Pipes, they cyberstalked Khalidi and clogged his email mailbox with spam for weeks at a time). All opinion polling shows that most American Jews are politically liberal, overwhelmingly vote Democrat, and support trading land for peace to resolve the Israeli-Palestinian conflict. Khalidi is their political ally in any serious peace process, which many have recognized.

Former Israeli Prime Minister Ehud Olmert has repudiated the “Greater Israel” fantasy that drives the Middle East Forum, the Washington Institute for Near East Policy, Commentary, the Jewish Institute for National Security Affairs, the Hudson Institute, the American Enterprise Institute and other well-funded sites of far-right thinking on Israel-Palestine that have become, with the rise of the Neoconservatives, highly influential with the US Republican Party. Olmert’s current position is much closer to Khalidi’s than it is to the American ideologues.

That McCain should take his cues from people to the right of the Neoconservatives shows fatal lack of judgment and signals that if he is elected, he will likely pursue policies that are very bad for Israel, forestalling a genuine peace process (which would involve close relations with Palestinians!)

McCain even compared the gathering for Khalidi that Obama attended to a “neo-Nazi” meeting! I mean, really. This is the lowest McCain has sunk yet.

McCain is bringing up Khalidi in order to scare Jewish voters about Obama’s associations, and it is an execrable piece of McCarthyism and in fact much worse than McCarthyism since it is not about ideology but rather has racial overtones. Not allowed to pal around with Arab-Americans, I guess. What other ethnic groups should we not pal around with, from McCain’s point of view? Is there a list? Are some worse than others?

Ironically, as the Huffington Post showed, while John McCain was chairing the International Republican Institute, he gave over $400,000 to Rashid Khalidi’s Center for Palestine Research and Studies for work in the West Bank.

Here is Lou Dobbs letting McCain have it over this piece of hypocrisy.

The rightwing American way of speaking about these issues is bizarre from a Middle Eastern point of view. Lots of real living Israelis have close ties to actually existing Palestinians. There are 12 Palestinian members of the Israeli Knesset, and they have helped keep the Kadima government in power. Here is PLO leader Mahmoud Abbas with current Israeli Prime Minister Tzipi Livni; Livni has repeatedly negotiated with the PLO as foreign minister of Israel. McCain’s entire line of attack assumes that Palestinian equals “bad” and ignores Israel’s and the Bush administration’s support for the PLO against Hamas. 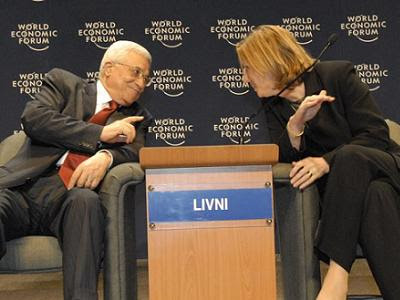 PLO leader Mahmoud Abbas with current Israeli Prime Minister Tzipi Livni.
As the Young Turks pointed out, before the ‘straight talk express’ became the ‘mealy-mouthed train wreck,’ McCain advocated direct negotiations with Hamas when it was in control of the Palestinian Authority after the 2006 elections.

One of the many recent rightwing freakouts is about the idea that the media is covering up some kind of close relationship between Barack Obama and Rashid Khalidi and this in turn shows, I guess, that the US is going to adopt a left-wing Arab nationalist perspective toward the Israeli-Palestinian conflict.

In regards to Khalidi, however, the guilt-by-association game burns John McCain as well.

During the 1990s, while he served as chairman of the International Republican Institute (IRI), McCain distributed several grants to the Palestinian research center co-founded by Khalidi, including one worth half a million dollars.

The relationship extends back as far as 1993, when John McCain joined IRI as chairman in January. Foreign Affairs noted in September of that year that IRI had helped fund several extensive studies in Palestine run by Khalidi’s group, including over 30 public opinion polls and a study of “sociopolitical attitudes.”

Not that there’s anything wrong with that! But it does expose some pretty massive hypocrisy on the part of the right-wing. Meanwhile, the real truth about Obama’s approach to Israel policy is that though there have been some promising signs, there have also been many moments when Obama’s been disappointingly timid on this issue. It’s an issue that calls for a dramatic substantive departure from the conventional wisdom — the tragedy of the matter, as everyone says, is that everyone more-or-less knows what a final status agreement would look like. But it is an issue that calls for boldness and the taking of some political risks under circumstances where there’s little political upside. I hope Obama’s got what it takes, and some days I even think he does. But anyone who thinks there’s a real risk of Khalidi controlling US policy toward Israel is living on some other planet.