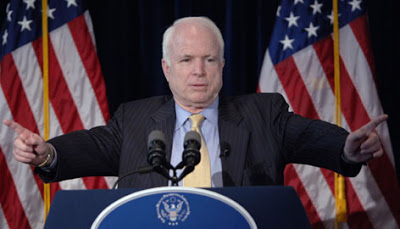 John McCain unveiled his new campaign strategy today: invite the American people to take a magic carpet ride with him to the land of Eternal Sunshine.

In a speech this morning in Ohio — backed up by a companion TV ad — McCain hopped into an imaginary time machine and took us all to the year 2013, offering a sneak peek of what the world will look like at the end of his first term as President.

And what a wonderful world it will be: “The Iraq War has been won”: “Iraq is a functioning democracy”; “al Qaeda in Iraq has been defeated”; Osama bin Laden has been captured or killed; there’s been no major terrorist attack in the U.S.; Iran and North Korea have renounced nuclear weapons; “the size of the Army and Marine Corps has been significantly increased and are now better equipped”; there’s been “a substantial increase” in veterans’ benefits; the genocide in Darfur has been stopped; “the United States has experienced several years of robust economic growth, and Americans again have confidence in their economic future”; “the world food crisis has ended”; “test scores and graduation rates are rising everywhere in the country”; “health care has become more accessible”; Medicare and Social Security have been fixed “without reducing benefits” or “increasing taxes and raising premiums”; America is “well on the way to independence from foreign sources of oil”; “our southern border is now secure” and “illegal immigration has been finally brought under control.” And, oh yeah, there are a lot fewer fat kids trudging their way through PE class.

There’s only one problem: it’s pure, unadulterated fantasy. The political equivalent of the trippy tour the Beatles gave us in Lucy in the Sky with Diamonds — only instead of rocking horse people eating marshmallow pies, we have “professional and competent” Iraq Security Forces and an Iraqi government “capable of imposing its authority in every province” and “defending the integrity of its borders.”

Despite starting his speech by saying how important it is for candidates to lay out “what they plan to achieve not with vague language but with clarity,” McCain then proceeded to spin his cotton candy daydream with nary a hint of how his lofty and admirable goals will be accomplished. He’s taking us on a trip to Fantasyland, but at no point does he show us how we’re going to get there.

Sure, he tossed out a few generalized, pie-in-the-sky allusions to “reforms of the [health] insurance market” and “reforms to the way we acquire weapons programs” and a handful of specifics, including “a reduction in the corporate tax rate” and the building of “20 new nuclear reactors.” But when it came to Iraq, he didn’t offer even the vaguest clue about how — after five long years of failure — victory, democracy, the defeat of al Qaeda, the prevention of civil war, the disbanding of militias, and the sudden competence of the Iraqi military will magically be achieved. Rather, one morning four and a half years from now, we’re going to wake up and pigs will be flying, and all will be right with the world.

I get the thinking behind the McCain camp’s strategy. With 82 percent of the public unhappy with the direction of the county, and with 68 percent unhappy with the war, and 75 percent anxious about the economy (which McCain admits he doesn’t understand all that well), there is no way McCain or his fellow Republicans can run on reality or their record over the last seven-plus years, so they have to run on fantasy.

But building castles in the sky — and painting rosy, reality-free scenarios — runs counter to McCain’s brand as a straight talker™ who tells it like it is, even when that means admitting that ending the war or fixing the economy or passing needed reforms won’t be easy.

You know things have gotten bad for the GOP when John McCain, the man who ran a TV ad claiming “One man does what’s best for America. Not what’s easy,” and who told us on the campaign trail “I’ve got to give you straight talk, my friends. This is a tough war we’re in. It’s not going to be over right away. There’s going to be other wars, I’m sorry to tell you… My friends, it’s going to be tough,” is now acting like Mr. Rogers. It’s going to be a beautiful day in the neighborhood. In 2013. I can’t tell you how, boys and girls, but it will be. You just have to trust me.

I’ll admit, I found McCain’s fantasy speech moving and effective, especially the part where he envisions a growth in national service, fueled by young Americans who “understand that true happiness is much greater than the pursuit of pleasure, and can only be found by serving causes greater than self-interest.” I also appreciated his promise to “set a new standard for transparency and accountability,” abstain from Bushian signing statements, and do away with “mindless, paralyzing” partisanship while making the coming campaign “an argument among friends, each of us struggling to hear our conscience and heed its demands.”

Then the pig that was flying overhead fell from the sky, showed me his McCain button, and reminded me that Hamas wants Obama to win.

This entry was posted in RagBlog and tagged McCain, Politics, Presidential Campaign. Bookmark the permalink.