Medea Benjamin: "Both Parties Have Kept Us Down This Militaristic Path and Neglected Our Basic Needs" 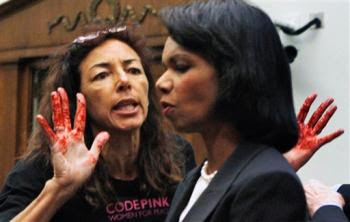 WASHINGTON – Kelly Jacobs will be wearing dresses made from a “peace flag” every day at the Democratic National Convention. As a delegate and a CodePink activist, she’ll don bright pink earrings, shoes and backpacks – and hundreds of peace and pink-colored buttons.

“There’s no getting away from the peace message. It’s on my neck down to my waist,” said Jacobs, 49.

The Mississippi activist, who is a delegate for Hillary Rodham Clinton, is one of about 20 CodePink women attending the Democratic convention. They probably won’t be disruptive inside. But CodePink members outside the Denver convention are planning to stage parades, protests, concerts and other theatrics – anything to keep the anti-war message alive.

These are hard times for peace activists. Despite CodePink’s flashy costumes and willingness to disrupt campaign events and congressional hearings – sometimes facing arrest for it – the women are finding it more difficult to maintain public attention on the Iraq war.

Americans are now focused more on the gasoline prices they’re paying, declining values of their homes and other economic issues. The ups and downs in a highly contested presidential election also have edged Iraq off the front page and evening newscasts most days.

“We do feel to some extent that these elections have sabotaged our peace actions and messaging because … the media is completely focused on the two candidates,” said CodePink activist Liz Hourican, who moved here from Arizona a year and a half ago to devote her time to ending the war. “It’s a lot more challenging.”

And while Iraqi and American officials are discussing a pullout of U.S. combat troops from major Iraqi cities by next June and a broader withdrawal by 2011, CodePink members say they won’t be satisfied until all U.S. forces are back from Iraq. “We’d like a timeline that is shorter,” said co-founder Medea Benjamin.

Congress’ decision this summer to fund U.S. operations in Iraq and Afghanistan into next year with $162 billion was a setback, but CodePink already was on the campaign trail, “bird-dogging” presidential candidates and unfurling anti-war banners at their events.

Republican John McCain is a favorite target. “Just about every place McCain goes, we have somebody confronting him,” Benjamin said. “We want the undecided voters … to see we associate McCain with more war and with the failed Bush policy, and, of course, we want the media to cover it.”

The activists’ campaign on Capitol Hill didn’t stop. Before Congress left for recess, the women in their pink outfits scoured the halls almost daily. They seated themselves behind witnesses at hearings unrelated to the war, flashing pink anti-war posters at TV cameras recording, for example, Federal Reserve Chairman Ben Bernanke talking about the collapse of investment bank Bear Stearns.

“There’s a lot of very creative people in the group,” Hourican said. “They make so many different crafty, visually brilliant things, and they love using their talents to push this along and see their costume on the news.”

Obama’s people haven’t exactly welcomed them. A group of women went to his Washington office last month seeking to meet with a foreign policy aide but only got a promise in the hallway they would be contacted and given more information on the Democratic candidate’s policies. His office never called back.

When Congress returns in September, so will the women in their pink garb. Without a war funding bill to protest, they’ll lobby against going to war in Iran and protest alleged abuses by military contractors. “As long as Congress is sitting and not doing the people’s bidding, then we’re going to be here,” said Gael Murphy, another CodePink co-founder.

CodePink – a mocking reference to the government’s color-coded terror alert system – started as a vigil in front of the White House in November 2002 to protest a war with Iraq. The vigil culminated in a women’s peace march to the Capitol four months later when the war began.

Soon afterward, other chapters “spontaneously started all over the country,” Murphy said. The group now has 250 chapters and 200,000 people on its mailing list.

At any given time, at least six CodePink members live in a three-story group house near Capitol Hill that is decorated with pink curtains and “peace” banners. Times and locations of major congressional hearings and demonstrations for the day are written on a self-erase board. Just as prominent is the phone number for U.S. Capitol Police, a source for learning which activists have been arrested, the charges against them and the bail needed.

In Denver this week and at the Republican nominating convention next week in St. Paul, Minn., CodePink has orchestrated an array of anti-war protests. “Pink Police” riding in-line skates who will hold signs reading “stop war, yield for peace” and bicycle brigades will rally against what the activists call America’s addiction to oil and war.

“You can’t be green and be pro-war,” said co-founder Benjamin. “In general, both parties have kept us down this militaristic path and neglected our basic needs.”

This entry was posted in RagBlog and tagged CodePink, Peace Movement, Presidential Campaign. Bookmark the permalink.