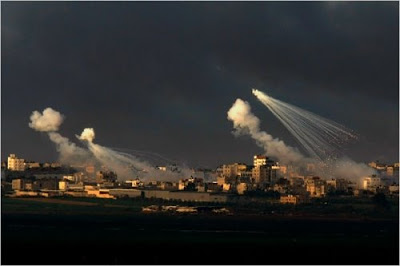 Obama will give a major policy talk at Cairo University on June 4, intended to start mending the rift between the United States and the Arab world. During the Bush years, many Arabs turned against the United States because of the invasions of Afghanistan and Iraq, as well as the abuses at Guantanamo and Abu Graib. But the issue that is really at the crux of the tensions with the United States is the intractable conflict between Israel and Palestine, and what many perceive as a one-sided U.S. policy in support of Israel.

The Obama administration has taken a positive stand on the Israeli settlements, calling for a complete freeze. “[Obama] wants to see a stop to settlements — not some settlements, not outposts, not ‘natural growth’ exceptions,” Secretary of State Hillary Clinton recently told reporters.

But the administration has said almost nothing about the devastating Israeli invasion of Gaza that left over 1,300 dead, including some 400 children. To many in the Middle East, this is an unfortunate continuation of past policies that condemn the loss of innocent Israeli lives, but refuse to speak out against the disproportionately greater loss of Palestinian lives at the hands of the Israeli military.

The Israeli invasion of Gaza began on December 27, 2008, when Obama had just won the election but had not yet taken office. While he spoke out against the November 26 Mumbai terrorism attack, he refused to even call for a ceasefire in Gaza, saying coldly, “When it comes to foreign affairs it is particularly important to adhere to the principle of one president at a time.”

Once inaugurated, Obama appointed George Mitchell as a special peace envoy and immediately sent him on a “listening tour” to key places in the Middle East—except Gaza. Mitchell returned for a second trip to the region in late February, visiting Turkey, the United Arab Emirates, Egypt, Israel and the West Bank but once again bypassing Gaza. The same thing happened on his third trip in April.

Hillary Clinton has never visited war-torn Gaza. She promised $300 million for rebuilding, but the aid won’t get to Gaza as long as the administration insists on dealing only with Mahmoud Abbas and his Palestinian Authority in the West Bank while shunning Hamas, which controls Gaza and was democratically elected.

Obama won great support from the American people during the presidential campaign when he said that America must talk to its adversaries, without preconditions. But his administration now puts ridiculous conditions on talking to Hamas: It must recognize Israel, renounce violence and accept previous international agreements. Israel, on the other hand, does not have to recognize Palestine, renounce violence or abide by past agreements. Putting preconditions on just one side of the conflict makes it impossible to move a peace process forward.

While Obama prepares for his trip to the Middle East, more than 150 people—mostly Americans—are trying to enter war-torn Gaza through both the Egyptian and Israeli borders. Organized under the umbrella of the peace group CODEPINK, this is the largest group of Americans to travel to Gaza since the siege began.

The delegations, invited by the United Nations Relief and Works Agency (UNRWA), are bringing medicines, toys, school supplies and playground building materials. An estimated 1,346 Gazan children were left without one or more of their parents as a result of the Israeli assault and the majority were left traumatized and depressed.

That’s why the peace group CODEPINK has launched an international petition (see www.codepinkalert.org) calling on Obama to visit Gaza and see for himself the devastation and deprivation that continues to plague the region’s 1.5 million people almost 6 months after the invasion. Just this week, Obama just tacked a new stop to his upcoming Middle Eastern visit: Saudi Arabia. If he can make room for a private dinner with the King, then surely he can find the time to go to Gaza. Isn’t it more important for Obama to visit a region where 1,300 people have recently been killed and thousands of homes, schools and mosques destroyed? Isn’t it more important for him to see how the Israelis are using the yearly $3 billion in military aid from U.S taxpayers?

Obama should take the opportunity, during this visit to Egypt next week, to visit Gaza. He should express his condolences for the loss of so many innocent lives, call for a lifting of the inhumane siege that continues to imprison an entire population, and support an investigation of how U.S. military funds to Israel are being spent.

Those actions, more than any fine words he may speak during his talk at Cairo University, will do wonders to repairs our relations with the Arab world that were so tattered during the Bush years.