Medea Benjamin : Getting Naked in Houston to Expose BP 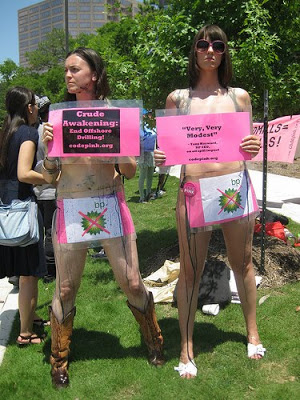 HOUSTON — Diane Wilson, a fourth generation shrimper from the Texas Gulf and a founder of CODEPINK, has been watching the BP spill and the botched clean-up with a mixture of dread and anger. After all, it’s her livelihood and that of her community that’s at stake.

“I’ve lived all my life in the Gulf Coast, in the oil, chemical, and gas hellhole we call an energy corridor,” said Diane Wilson with her Texas twang. “I’ve been fightin’ these polluters for 21 years. But this BP spill is the nail in the coffin of the people who make their living along the Gulf Coast. This is our 9/11 in slow motion.”

Diane has been incensed by the cavalier attitude of BP CEO Tony Hayward, who said that the largest oil spill in U.S. history is a tiny speck in the vast ocean. “He had the nerve to say that those miles upon miles of underwater oil plumes that stretch to who knows where and do who knows what to the fisheries, the ecosystem, and Gulf of Mexico for possibly generations, is really going to have a ‘very, very modest impact.’ Sittin’ there listening to BP’s lies made my blood boil,” Diane fumed. “I realized I better get off my butt and do somethin’ about it.”

This 61-year-old grandmother of five is all about action. To protest chemical companies polluting her bay, in 2002 Diane climbed a chemical tower, chained herself to it and then did a 30-day water-only hunger strike. As a CODEPINK co-founder who tried to stop the invasion of Iraq in 2003, an invasion she knew was all about oil, Diane got arrested confronting Secretary of Defense Donald Rumsfeld at a Congressional hearing. Then she scaled and tied herself to the White House fence (and almost got shot by a sniper). She even traveled to Iraq when the U.S. military was about to attack, putting herself forward as a human shield.

So Diane put out a call for people to join her in Houston on Monday, May 24, to protest at the BP headquarters. Looking for a creative way to expose the company’s criminal behavior (and entice the media, who rarely cover protests in Texas), Diane was inspired by the example of a group of women from Nigeria who took over a Chevron oil rig and threatened to strip naked if the company didn’t hire more local workers and invest in the community. Faced with just the threat of nudity, Chevron gave in.

“If the Nigerian women could use their bodies on the Niger Delta, why can’t we do it in downtown Houston?” Diane reasoned.

Diane doesn’t take nudity lightly. She didn’t grow up in a hippie commune, but in a fundamentalist Pentecostal family in rural Texas.

I was taught that flesh is sinful, it’s the devil. I was so modest that if my sister said the word ‘bra’, I would climb under the table. I was horrified by anything intimate. So for me, using nudity to expose the truth about BP was WAY outside my comfort zone. But I realized that it’s the destruction of our ecosystem by corporate greed that’s obscene, not a woman’s body.

To prepare for the action, Diane got 100 pounds of fish from her fishing buddies, old fishing nets to drag the dead fish and fake oil to dump on them. She and one of her daughters made beautiful signs saying “Expose BP” and “The Naked Truth about Drill, Baby, Drill” and put them on big sandwich boards. “You could say we was cheatin’ because we decided to use sandwich boards to cover our private parts, but that’s about as nude as those of us from Texas can get,” laughed Diane. “We’ll leave the full-on nudity to the women from California.”

The action was superb. About 100 people showed up from all over Texas and six other states — including California. Some people wore pasties that said “No BP,” some dressed as fishermen, oily birds, and fish. Diane put on her white rubber fishing boots, smeared herself with oil and wore a sandwich board that read “Expose BP’s Obscene Side.”

Two imposter oil workers in BP uniforms doused the group with fake oil, causing the birds and fish to recoil and die on the sidewalk. The police and BP security stood by watching, as nice as could be. It was obvious that BP higher ups had the good sense to tell them that arresting protesters would not help their image.

The group was having fun mocking BP, but when Diane took the megaphone to speak, the tone changed. “I am here because I’m outraged,” she said, her voice shaking. “My family has lived on this gulf for 100 years, we’ve been fishing these waters for generations and now we’re seeing it decimated. All we’re getting from BP is lies. We’re not getting any answers from the government. That’s why people have to hit the streets to demand solutions.”

After the action, I sat down with Diane to hear her solutions and ideas for future actions. “BP should be shaken down like a rotten fig tree,” she said.

The government should seize their profits and use them for the clean up and then to invest in clean energy. We should shame those senators who want to stop the Big Oil Bailout Prevention Act legislation that would raise oil companies’ liability from a pitiful $75 million to $10 billion. And we should demand that our government stop offshore drilling. No new permits, period. We have to seize this moment to move our country away from fossil fuels that are responsible for environmental devastation and wars.

CODEPINK has asked supporters to email letters to Senator Murkowski, asking her to stop blocking the Big Bailout Prevention Act. It’s time to protect the fishermen, the coastal residents and the wildlife, not the corporation at fault for the disaster.

But for Diane, sending emails is not enough. She is calling on people throughout the country to boycott BP — not just passively, but by getting out to BP gas stations to protest and educate their communities on the company and the catastrophe. CODEPINK supports her call to action and is providing resources for action on our website. We’ll also be bringing Diane to Washington, DC, to confront Congress, the White House Administration, and BP executives with the crude awakening about Big Oil.

“Pass out fliers to drivers. Ride your bikes around the stations. Get creative. Hey, maybe you even want to do your own nude protest,” she grins. “Expose BP. Expose that Drill, Baby, Drill means Spill, Baby, Spill. After all, what’s at stake is nothing less than our planet. And that’s the naked truth.”

[International peace activist Medea Benjamin was a founder of CODEPINK.] 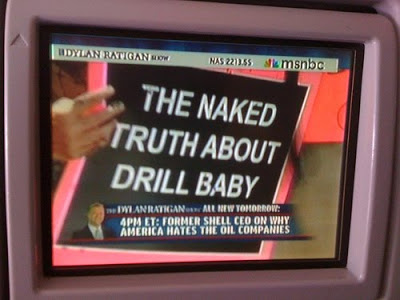 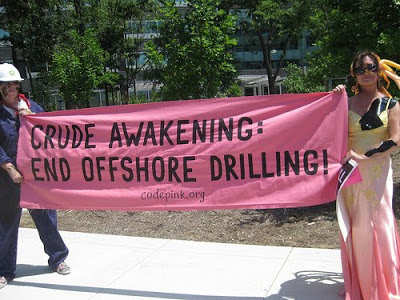 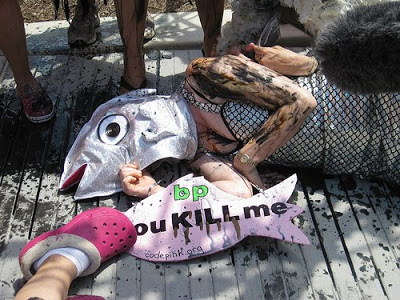 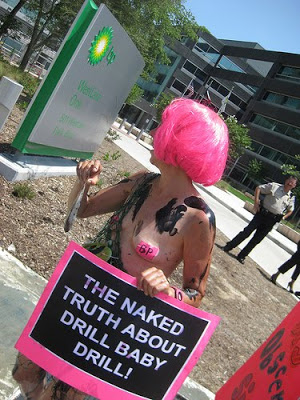 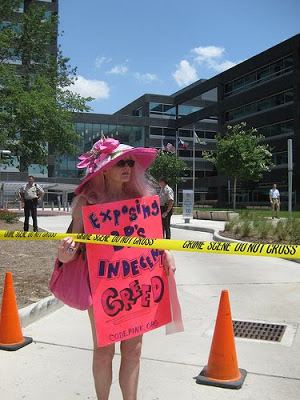 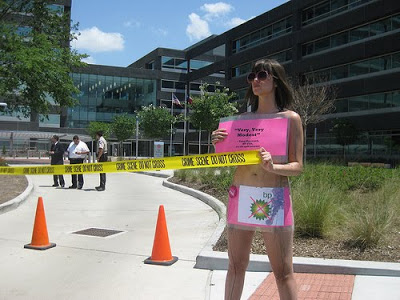 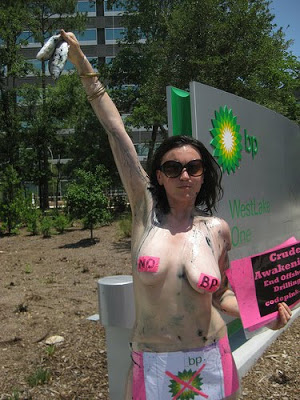 CodePink demonstrators at BP headquarters in Houston, May 24, 2010. Photos from CodePink / Flickr.
Thanks to Fran Hanlon / The Rag Blog

4 Responses to Medea Benjamin : Getting Naked in Houston to Expose BP