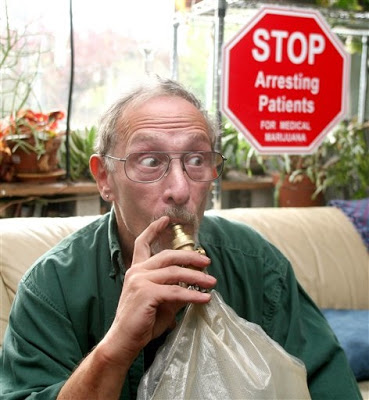 With key medical marijuana ballot initiatives likely to pass, and a more pot-friendly majority in Congress, there is room for optimism.

You have to hand it to the Republican National Committee: Those guys really know how to pick the wrong fight.

John McCain, already running against the public opinion grain in support of the Iraq War and Bush tax cuts, received no help from headquarters last month when the RNC made medical marijuana a campaign issue. After Barack Obama told an Oregon weekly that he would end federal raids on medical marijuana users and providers in states with compassionate use laws, the RNC pounced. Obama’s position, said an RNC statement, “reveals that (he) doesn’t have the experience necessary to do the job of President (and) lacks the judgment to carry out the most basic functions of the Executive Branch.” Because the Supreme Court has ruled that federal drug laws trump state drug laws, the RNC reasons that halting federal raids would be tantamount to ignoring the law.

They’re right. But the RNC might want to get some new pollsters. What they and their candidates don’t seem to realize is that a steadily shrinking minority of Americans oppose the controlled medicinal use of cannabis — around 20 percent, according to the last Gallup poll. It’s a safe bet that an even smaller number considers paramilitary raids on the homes of peaceful cancer patients to be a “basic function of the Executive Branch.” During the New Hampshire primary, every Democratic candidate recognized this political reality by promising to end federal harassment of state-approved medical marijuana facilities and users. Republican candidates Tom Tancredo and Ron Paul pledged the same.

And John McCain? When pressed by activists from the group Granite Staters for Medical Marijuana, the Arizona senator responded in lockstep with most of his GOP peers, sounding less like a maverick than a Reagan-era after-school special. “I do not support the use of marijuana for medical purposes,” McCain said. “I believe that marijuana is a gateway drug. That is my view, and that’s the view of the federal drug czar and other experts.”

Given current trend lines, it may not be long before it’s possible to count McCain’s “other experts” on two hands. In February, the 125,000-member American College of Physicians, the second-largest physicians group in the country, published a position paper endorsing the merits of medical marijuana and recommending the end of marijuana’s classification as a Schedule 1 drug. “The ACP endorsement is massive,” says Bruce Mirken of the Marijuana Policy Project, a Washington, D.C.-based lobbying group. “It blows to splinters the assertion that the medical community doesn’t support medicinal cannabis.”

As goes the ACP, so may go the American Medical Association, an endorsement from which would leave the anti-medical marijuana position of the Food and Drug Administration very lonely indeed.

To its credit, the country has not waited for the medical establishment before moving forward on marijuana policy reform. Over the last decade, support for compassionate use laws and broader decriminalization efforts has been growing, if not at weed’s pace, then fast enough for one veteran marijuana reform lobbyist to now speak of being “within striking distance of a national tipping point.”

Since California passed Proposition 215 legalizing medical marijuana in 1996, an average of one state per year has followed suit, some through ballot initiatives, others through legislation. Even in states that have yet to enact reform, a flurry of bills has been introduced. This activity hasn’t been limited to usual-suspect states like Oregon and Vermont. Recent years have seen medical marijuana laws introduced in Ohio, Alabama, Missouri and Tennessee. In staunchly conservative South Carolina, it was a Republican state senator, whose wife lost a battle with brain cancer, who introduced his state’s medical marijuana bill. In Texas, the state government last year passed a bill that is a halfway house for decriminalization, allowing police to issue citations instead of arresting adults who possess less than 4 ounces of marijuana.

The next big test on the horizon is the Midwestern swing state of Michigan, where voters in November will decide on a medical marijuana law, the first such statewide ballot initiative since South Dakotans narrowly rejected theirs in 2006. If passed, Michigan will be the only state with its geographical and electoral profile to pass a medical marijuana law. According to the Inside Michigan Politics newsletter, polls show two-thirds voter support. “Michigan looks set to become the 13th medical marijuana state this November,” says Rob Kampia, executive director of the Marijuana Policy Project.

The other big initiative in November will appear on ballots in Massachusetts. If passed, the maximum penalty for possession of up to an ounce of marijuana in the Bay State would drop from up to six months in jail and a $500 fine to a $100 civil fine.

There is also still a chance that the New York state legislature will take up medical marijuana this session, a move that would enjoy overwhelming in-state support. Post-Giuliani New York City is the marijuana arrest capital of the world, with nearly 40,000 arrests in 2007 alone. The situation has gotten so out of hand that the New York Times recently urged Gov. David Paterson to take the lead in drug policy reform. Few governors are better positioned to do this than Paterson, who is not only on good terms with state Republican leaders, but has the moral authority that comes from suffering from glaucoma, a painful condition known to be alleviated by marijuana. Before becoming governor, Paterson was a leading activist for drug policy reform and was once arrested protesting the draconian and racially biased Rockefeller Drug Laws, which turn a brittle 35 this year. (Incidentally, the Drug Enforcement Agency is celebrating the same birthday in 2008, its website proudly declaring “35 Years of Excellence.”)

But whatever happens inside Michigan, Massachusetts and New York, the 2005 Supreme Court decision in Gonzales v. Raich still leaves marijuana users open to federal prosecution under the Controlled Substances Act. As highlighted by the RNC statement critical of Obama’s pledge, this decision will continue to undermine state- and local-level reforms until Congress changes federal law. Although only 1 percent of marijuana cases are prosecuted at the federal level, DEA raids on patients, caregivers and providers have been on the rise in states that have passed medical marijuana laws. This is especially true of California and Oregon, where in many cases individual patients have been detained and terrorized. In Los Angeles, the DEA has begun threatening the owners of buildings used for medical marijuana activities with seizure of their property, a development the Los Angeles Times has called “a deplorable new bullying tactic.” According to Mirken, “The DEA has become the single largest obstacle to effective regulation of (medical marijuana) establishments.”

At the moment there are three bills in Congress that seek to put a stop to these raids and set a precedent for federal-level reform.

The young granddaddy of this legislation is the bipartisan Hinchey-Rohrabacher Amendment, which has been introduced every year since 2003. Essentially, the amendment would strip the Department of Justice of funds to prosecute medical marijuana cases in states that have medical marijuana laws on the books. Named after Rep. Maurice Hinchey, D-N.Y., and Rep. Dana Rohrabacher, R-Calif., the legislation wouldn’t legalize marijuana at the federal level or prevent the feds from prosecuting medical marijuana use in states without medical marijuana laws. It would simply enforce respect for state marijuana laws. When first introduced in 2003, Hinchey-Rohrabacher received 152 votes. Last year, that number had risen to 165. Later this summer, Congress will tackle the amendment again when it votes on the Department of Justice Appropriations bill. Reform advocates hope the amendment will benefit from racking up endorsements from groups like the right-leaning Citizens Against Government Waste, which came out in favor of Hinchey-Rohrabacher as a way for Congress to “start sending a signal that its priorities are in order.”

But every year so far has been a 10-yard fight, and its sponsors don’t expect that to change this year. “This will continue to be a tough battle,” says Jeff Lieberson, Hinchey’s spokesperson. “Many politicians are still behind the voters on this issue.” Other analysts also warn against high expectations, pointing out that the timing is especially unfavorable for drug policy reform at the federal level.

“The movement on this issue in 2008 is going to be almost nonexistent because politicians are focused on the election,” says Alex Coolman, a former attorney with the Drug Policy Alliance and author of the Drug Law Blog. “Nobody in Washington wants to do anything that could be perceived as controversial.”

In April, Hinchey-Rohrabacher was joined by two other marijuana policy reform bills, both co-sponsored by Barney Frank, D-Mass., and Ron Paul, R-Texas. HR5842, the Medical Marijuana Patient Protection Act, would deny the federal government the right to employ the Controlled Substances Act to intervene in states that have legalized medical marijuana; it would also remove marijuana from the list of Schedule 1 drugs. HR5843, meanwhile, known as the Personal Use of Marijuana by Responsible Adults Act, would effectively decriminalize possession of up to 1 ounce. “We’re in the early stages here,” says Frank spokesperson Peter Kovar. “Nothing like this ever comes quick.”

But it may be coming more quickly than some people expect. “All the indicators are prompting in the right direction,” says Kampia. “Every major new ballot initiative looks set to pass. Infrastructure is growing: email lists, organizations, allies — it’s across the board. Public opinion is moving steadily in favor of decriminalization. State laws are moving forward, and none are going backward. We’re constantly picking up votes in the House. The 110th is the most supportive Congress we’ve ever had.”

If the RNC keeps attacking Democrats on medical marijuana, the 111th will be that much better.