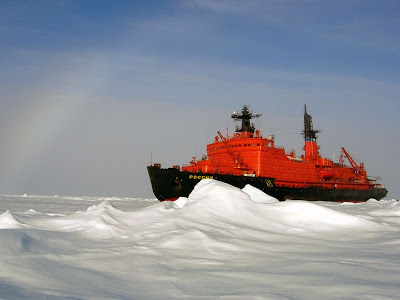 Melting ice will open up much of the Arctic to undersea excavation of natural resources.

‘The United States, Russia, Canada, Norway, Denmark, and other interested parties are all attempting to claim jurisdiction over the opening Arctic territory… Increasingly lost in the race for Arctic hydrocarbons are the concerns of environmentalists.’

Many see the problem of global warming and the melting polar ice caps as a looming ecological disaster.

Others, however, see it as an opportunity — a chance to gain access to lucrative energy deposits long hidden under layers of Arctic ice.

The United States, Russia, Canada, Norway, Denmark, and other interested parties are all attempting to claim jurisdiction over the opening Arctic territory. The Reykjavik meeting aims to discuss the possibility that disputes over shipping routes may turn into military conflicts.

Moscow asserts that it has the right to control an area equivalent to the size of France. As early as September 2008, President Dmitry Medvedev was calling for clear legislation on his country’s activities in the Arctic.

“Our priority task is to turn the Arctic into Russia’s resource base of the 21st century,” Medvedev said. “In order to fulfill this task, we should first resolve a number of special issues. The main issue is to ensure and firmly defend Russia’s national interests in that region.”

The Arctic has long been seen as a rich but inaccessible resource base. Energy experts estimate there may be as much as 25 percent of the world’s oil and gas reserves lying beneath the Arctic seabed.

“The Arctic presents Russia with a range of interests, especially as an energy supplier. Even by preliminary estimates, the Arctic shelf is one of the biggest supplies [of energy resources] of oil and gas,” says Dmitry Abzalov, an expert at the Center for Current Politics, a Moscow-based think tank.

Environmentalists worry about the effect of increased resource extraction.”Besides that, we’re talking about a number of other things. The Arctic is a vital military strategic area for the countries around the North Pole. Without a doubt, the development of this region is connected traditionally to the use of bioresources — first and foremost the fishing industry,” Abzalov tells RFE/RL’s Russian Service. “But of course, there’s no less interest in its hydrocarbon wealth.”

Medvedev’s call to adopt a federal law on delineating the southern border of Russia’s Arctic zone last autumn drew sharp reactions from other countries with a claim on Arctic territory.

Canada responded by threatening to impose stricter registration requirements for ships sailing in the Northwest Passage, the sea route crossing over the northern coast of North America.

The United States, Norway, and others have argued that any attempt by Russia to draw up its own Arctic borders would have no basis in international law.

Such concerns haven’t stopped Russia from demonstrating an aggressive interest in the region. Russian strategic bombers have made a series of test flights across the Arctic toward Canada and the United States; submarine expeditions have been conducted at Moscow’s behest to lay claim to gas and oil fields below the ocean floor.

Such moves have only sparked concerns that the race for the Arctic may quickly escalate into a multilateral military confrontation.

Maritime law is part of the problem. The United Nations Convention on the Law of the Sea says any littoral state can lay claim to territory within 200 nautical miles (370 kilometers) of its shoreline, and can develop any natural resources within that zone.

The law, however, also stipulates that that distance can expand to some 350 miles (648 kilometers) if the littoral state can provide scientific proof than an undersea continental plate is a natural extension of its territory.

Russia is now seeking to claim as its territory the Lomonosov Ridge — an 1,800-kilometer-long section of the continental crust running from the New Siberian Islands to the Canadian Arctic islands.

Moscow says the Lomonosov Ridge is a natural extension of its continental plate, and has launched highly publicized expeditions to obtain the proof necessary to make a case before the United Nations that the territory is Russia’s. (Canada and Denmark also claim the ridge is an extension of their territory.)

The UN has asked the Arctic states to submit their territorial claims for review by May 2009. But Abzalov of the Center for Current Politics says he does not believe the issue will create great difficulties between the five Arctic countries.

“Considering the battle for the Arctic started long ago, I wouldn’t say that this would lead to any new confrontation,” Abzalov says.

Increasingly lost in the race for Arctic hydrocarbons are the concerns of environmentalists. They worry that increased traffic and exploration in the Artic may do irreparable damage to the region’s fragile biosphere.