Memo from the Blackland Prairie : Obama and the Texas Family Farm 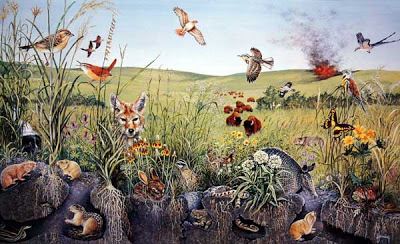 I live on and manage our family farm just south of Bartlett, Texas, in the extreme northeast of Williamson County. Since the late 60s when my father was too old to farm the land, we contracted on a “share-basis,” as did many other aging farmers in our locale, with another nearby farmer to keep our soil in cultivation.

This was a great idea for several reasons: it permitted people whose entire lives had been tied to the earth to remain on their property, which they loved, rather than have to sell and move away for the duration of their elder years; it also kept the land truly productive, which is also important to farmers whose pride and responsibility has always been to help feed the world.

This happy transaction becomes magnified when we consider that this area is part of the vast, though diminishing (due to development from urban encroachment) Blackland Prairie, some of the most fertile soils on the planet. Appropriately cornucopia-shaped, the Blackland Prairie starts near the Texas Coast then wends its narrow way up into a small stretch of Canada. The only other place somewhat like it is Ukraine on the other side of the globe.

Meanwhile, this idea also benefited our near-neighbors who continued the actual farming operation. They could afford to take advantage of advancing technology; few realize that a modern tractor sells for between a quarter- and a half-million bucks, with the necessary implements costing about the same. Their children trained at Texas A&M.

What I am saying is that, since the 40s, independent subsistence farming has been a thing of the past; the necessary education and equipment to farm is very expensive. Those of us with relatively small acreages would not have been able to keep up, so we would have been driven out of the marketplace, even had age not been a factor.

Soil conservation was a big issue on the Plains during the Depression. Programs began to help farmers save their land, which in turn would save people in the cities because otherwise they would have nothing to eat. These programs were so successful that our surpluses saved humans everywhere after World War II and since.

These programs included financial compensation to farmers for cooperating in supplying what the market would demand. Down here, for one instance, we leave the tulip growing to the Netherlands and upper Michigan. Here, our row crops are devoted to grains, and depending upon what is planted we can produce more than one harvest each year.

This is the way agribusiness should be. So far, so good, right?

However, whenever we collectively set up an opportunity, “opportunists” soon get a whiff of potential easy money. Thus did agribusiness become identified with Monsanto, Con-Agra, and the like. Big corporations, which have had their way for far too long, driving small-time farm operations like ours out of business wherever they can, buying us out at lowest dollar, in order to increase their holdings. They are the ones who receive massive subsidies, all the while giving us small-time farmers a bad rep.

While I remain very impatient with the Obama Administration on other domestic issues, such as health care, unemployment, and immigration, to name a few, I am — as are all of us small-time farmers — grateful that early on in his first year, Obama stopped those massive subsidies. Before, investors of each Big Agribusiness would receive dollars in the hundreds of thousands and often millions, I would receive between $300-$600, again, depending upon yield.

Earlier this month, I received, from USDA through the Williamson County Farm Services Agency, my customary letter. only this time the content was satisfyingly different, and I quote from it in part:

This letter is to advise that you are eligible for the above mentioned program benefits subject to the Average Adjusted Gross Income (AGI) limitations. This determination is based upon your certification of average adjusted gross income (see enclosed copy of form CCC-926) and procedure outlined in Handbook 4-PL Paragraph 186.

I assure you that my non-farm income, adjusted gross or not, falls well below $500,000. Is $500,000 still too generous? Well, since so many factors have to be considered, we’ll have to wait and see. But at least, hot damn, it’s a great new start.

3 Responses to Memo from the Blackland Prairie : Obama and the Texas Family Farm