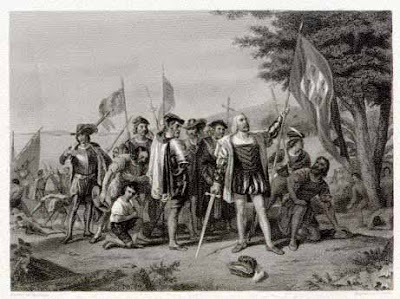 I know that many modern day people, even those from the Christian Right, like and or admire “Indians”, Native Americans. They think it is sad that the white people nearly killed every last one of them. There are other US citizens that believe the Indians were “savages” and the white man was just God’s hand eliminating a people that did not worship the one true God. One thing I know for sure is that at a critical moment in the Indian’s survival they were hated, without question, by the most powerful nation on earth. Some of us look back, as we read the accounts of the atrocities committed by the US upon the Indians, and shake our heads and think “how could our ancestors be so cruel?”

I do not find our ancestor’s cruelty very hard to imagine at all. All I have to do is listen to present day conservatives advocate the death and destruction of Muslims. They praise the destruction that the US has rained down upon Afghanistan and Iraq. I don’t have to step back in time to hear liberals denounced as “enemies of the State” for daring to think that killing civilians might be wrong. They are alive and well, front and center, both then and now, the conservatives are in a blind rage for the blood of “our enemies”.

Kurt Vonnegut mentioned Indian’s in an article he wrote called “Cold Turkey” in May, 2004. The article is about the US’s reaction to having to go off of oil dependency cold turkey. His comparison of Iraq and Native Americans is appropriate here:

“We’re spreading democracy [in Iraq], are we? Same way European explorers brought Christianity to the Indians, what we now call ‘Native Americans’. How ungrateful they were! How ungrateful are the people of Baghdad today. So let’s give another big tax cut to the super-rich. That’ll teach Bin Laden a lesson he won’t soon forget. Hail to the Chief.

That chief and his cohorts have as little to do with Democracy as the Europeans had to do with Christianity. We the people have absolutely no say in whatever they choose to do next. In case you haven’t noticed, they’ve already cleaned out the treasury, passing it out to pals in the war and national security rackets, leaving your generation and the next one with a perfectly enormous debt that you’ll be asked to repay.

Nobody let out a peep when they did that to you, because they have disconnected every burglar alarm in the Constitution: The House, the Senate, the Supreme Court, the FBI, the free press (which, having been embedded, has forsaken the First Amendment) and We the People” (Vonnegut 3).

We justified the killing-off of the Native American’s as “God’s will” even though the real motive was profit “Manifest Destiny”. There was money to be made by the handfuls if the Indians would just get out of the way! What better way to justify getting the Indians out of the way than by labeling them “savages” and killing them in the name of God? Now we are trying to kill off the Muslims for all of the same reasons and they know it. They know it better than the average US citizen. The US citizens are all glued to the Fox TV being taught that we are all hated by Muslims “for no reason”. I’m sure God is delighted with us all for using Him as an excuse to kill for profits.

The “Indian” nations lasted 20,000 years, or rather 19,500 years until the introduction of the Europeans. From the European’s perspective, a “new world” was opening up for profits, same as Iraq is being opened up for new profits. From the first moment that whites laid eyes upon the North American aborigines their thoughts were…, well, since we have them, let me reproduce them so the words can speak for themselves. From Christopher Columbus’ log:

“They…brought us parrots and balls of cotton and spears and many other things, which they exchanged for the glass beads and hawks’ bells. They willingly traded everything they owned… They were well-built, with good bodies and handsome features… They do not bear arms, and do not know them, for I showed them a sword, they took it by the edge and cut themselves out of ignorance. They have no iron. Their spears are made of cane… They would make fine servants… With fifty men we could subjugate them all and make them do whatever we want.” (Zinn 1).

Columbus saw a use for the “Indians”. However, by 1868, the same time that African-American’s were being lynched across the South due to their “inferiority to whites”, the whites could no longer see any use for Indians. After 20,000 years of existence the Indian’s fate rest in the hands of a nation pulsing with capitalistic greed. When the Indian, Tosawi, surrendered to General Sheridan, Tosawi tried to impress Sheridan with his English. Tosawi spoke his name and added two words in broken English, “Tosawi, good Indian.” Sheridan’s reply summed up the Indian’s fate, “The only good Indians I ever met were dead” (Brown 171-172). The words were refined into a US slogan that could be pulled out for any enemy, just fill in the name of the enemy de jour: “The only good Indian is a dead Indian.” Today it is: “The only good Muslim is a dead Muslim”.

The Indians were simply in the way of Manifest Destiny. It was “nothing personal”; it was just their time to die. Whether one calls it God’s judgment upon them or just the white man fulfilling his destiny in the natural order of society, the Indians became “good Indians” and died. Now it is the Muslims turn, and dog-gone-it they just don’t seem to want to comply. But, with God’s help, we’ll show ‘em: “might makes right.”

The US society of supposed “men of God” failed to take action to stop the Indian massacre. Only a few stepped forward and tried to shame the US into stopping the genocide of Indians, but these people, as always, were dismissed as “liberal nuts”. Some say that genocide is just democracy in action: if the majority of the people want genocide then genocide it is! Same as with today and the Laissez-Faire idea that the stock market is a haven for democracy: if stocks go up due to job cuts, it means the people want the job cuts. It is all madness from which the conservative Christians offer no relief, only support for the madness. To this day the conservative Christians do not go after the white supremacist in this country the way they go after homosexuals. Hatred of a minority group or race of people seems to always be justified in their minds.

I heard Kurt Vonnegut, on The Daily Show, talking about the US bringing its brand of democracy to Iraq and that it is appropriate when rationalizing both the genocide of the Indians and the slow development of democracy in Iraq. Mr. Vonnegut said that we must be patient with Iraq, because they are trying to learn the US’s style of democracy. This means that after about 100 years you abolish slavery, then you have genocide for races you don’t like and after 150 years you let women vote.

Well, I suppose it took the US awhile to have a “good democracy” because it was not under the guiding influence of God. Oops, I forgot, the Christian Right claims that we were indeed under the benevolent hand of God. It so hard to figure out where God’s hand ends and man’s greed begins. Hardest of all to understand is the Christian Right’s desire to connect the two and their insistence upon giving God “credit” for the US’s brand of “democracy”. I don’t think God is so evil. I don’t think conservative Christians believe that our treatment of Native Americans, Blacks and women have been evil, so how can they possibly think that bombing and killing thousands upon thousands of Iraqis is “bad”? Conservative Christians certainly hate anyone who dares to say that US treatment of any of these groups was “bad”.

This entry was posted in RagBlog and tagged Democracy, Genocide. Bookmark the permalink.