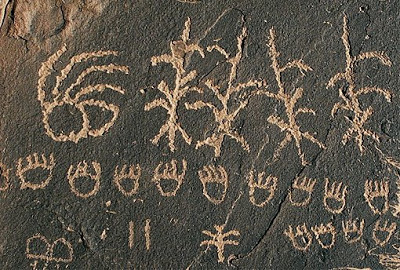 Petroglyphs from Willow Springs in northern Arizona. These engravings, made by Hopi Indians during ritual pilgrimages, depict the individual clan symbols of the pilgrims. Not all North American rock art is shamanistic in origin. This is especially true of rock art made by farming tribes like the Hopi. Photo by David S. Whitley.

Mesmo’s Desert Digest will continue to appear in The Rag Blog whenever Mesmo feels like sending it in. Gerry aka Mesmo is “a septuagenarian desert rat” who lives in Southwest New Mexico, “in the floodplain of the Gila River, near where it flows out of the Mogollon Mountains.” A former student at the University of Texas in Austin, a peace activist in the Vietnam era and a noted rock musician during the psychedelic days of the sixties and seventies, Mesmo — as did many of his peers — eventually made the transition to simpler ways. Now he abides in the desert where his farming is traditional but his technology sophisticated.

Mesmo’s introductory post on The Rag Blog was From Austin to Crazy Horse.

The Book Of Hopi includes the tribal history and general philosophies of this ancient people.

They still live up near the New Mexico-Arizona line. I was up there a few years ago with my friend and neighbor, Andrew, who once lived with the Hopi. They don’t let Anglos attend their ceremonies anymore but are otherwise hospitable enough. They live in concrete block houses now and drive pickups and have jobs. The old pueblos are in bad shape. But they still farm in the ancient manner, on the same lands. And they still perform the ancient ceremonies. However many faults their methods may have in the eyes of scientists, they continue to produce. Some of their gardens are spring fed and have been producing for hundreds of years. They must have read E.F. Schumacher, all the fields and plots are small.

Desert farming is a race to get crops through their cycle between frosts, the cycle shortens as you go north. There are many ways to “cheat nature” and increase the length of the growing season. They usually work. The scientists build greenhouses, the Hopis do ceremonies. Most farmers of organic bent follow the Moon cycles as do the Hopis. Some of the organic farmers do ceremonies too, but not many.

The Hopis say that their ancestors chose to live in the present location after searching two continents for a permanent home. The final decision was based not upon maximum productivity nor ease of life but upon balance. Their survival depends upon a good deal of work, good timing, and successful ceremonies. Everyone in the tribe has a role to play. If they do it just right, they believe, they will have a good harvest and peace amongst themselves.

I had known for a long time that I would one day settle in New Mexico. In the late ‘60’s through the mid ‘70’s I drove the Austin to San Francisco and back route countless times, each trip passing through NM twice. I started looking forward to the crossings and taking different paths. One of the items of interest on my long list was to test the Hopi logic of living in the desert and growing food. So when I finally arrived in NM primed to stay, I was looking for that special place where I could grow food and achieve balance. I asked for guidance from my spirits, they placed me here, Gila, NM. There is a clean little river and the growing season is fairly long (May to October). Much to my delight I discovered freaks living here too, a colony of sorts. Many of them had asked the same questions I was asking and were here looking for answers.

This year will be my 15th year of gardening. The first spring I put in a little garden. The next three springs I worked on farms. Since then I have been developing ways to garden in the desert, gardens of rather large size for a single person and with increasingly protective infra-structure for the plants. But I still plant my Chihuahuan corn the way the Hopis do it, and always follow the Moon cycles. They never fail–well, hardly ever.

The Indians who once occupied this valley and left us their magnificent pottery, the Mimbres tribe, had no trucks to deliver their food. They lived off the natural resources for 350 years. I set about to learn as much about how they did this as I could find out. Also looked carefully at what was growing around me and how much of it was edible. If they could do it, why not I?

Well, for starters they were tiny people, hardly taller than a mule deer, didn’t take much food to fill one up. For another thing, the cattle brought in here in the late 19th century grazed the whole county and nearby forest to dust, more than once. Disaster for the Southwest occurred after the end of WWI. Cattle had been selling for enormous prices and the ranges were swelled to overflowing. When the war ended the price dropped by two thirds or so. Cattle were abandoned, left to fend for themselves. This was back before fences.

It’s a wonder that anything still grows around here and much of the original landscape is long gone. The current plant life is laden with invaders who in many cases have taken over. Invaders like juniper (close relative of mesquite), Siberian elm, a tall, fragile tree that sucks up water like a sponge, all kinds of weeds from faraway sources, some of which are useful. That greenery on the hillsides is not native grass, that’s been gone for a long time. More likely weeds of various kinds such as star thistle whose seeds blow in the wind and seek out depleted land.

In the time of the Mimbres people the river was more of a swamp. Beaver dams kept the water impounded, floods were rare. The Mimbrenos raised fish along with their crops. They raised corn, tiny little ears that we found in their ruins, maybe one fourth the size of our typical ear and beans, some have been sprouted in spite of their incredible age. They came out looking a lot like what we call Aztec beans. I have some. Not my favorite.

After awhile it became obvious that using the Mimbreno model was a farce. Today’s Gila valley bore little resemblance to theirs. A better model would be the Mexican cultures that have been more recent occupants. Slowly but surely the logic and beauty of the desert Mexican diet has penetrated my thick skull. The basics, with a variety of spices, is the rule. And all the ingredients can grow in the desert with just a little help.

When I pick up this thread again I will continue the adventures of a townie adjusting to the desert environment and trying to get off the tit of modern commerce, trying to find the balance the Hopis are talking about.