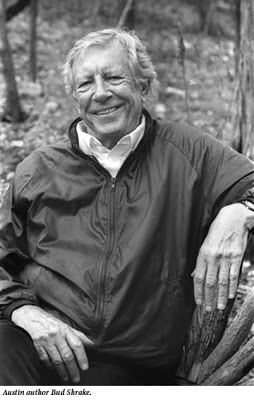 Texas literary legend Bud Shrake, 77, passed away on May 8, 2009, in Austin. Photo from The Texas Observer.

Bud Shrake, 77, a seminal literary figure (“a lion of Texas letters,” according to the Austin American-Statesman) and an Austin underground icon, died Friday, May 8, in Austin, after a long battle with lung cancer.

For an enticing set of rowdy and illicit memories, read Gerry Storm’s account, below.

‘Back in ’68 Joe Brown and I were stranded in the Big Apple with several suit cases of Acapulco Gold… Bud not only bought a couple of pounds but connected us with his gang at Elaine’s, the posh discothèque where we spent the evenings peddling the load by the pound and drinking.’

I first met Bud in New York City in the autumn of 1968. He was a sports reporter at the time, one of the rising stars in this field, employed by Sports Illustrated (to which I was a subscriber). I had lived in Dallas in the early ’60’s and followed his writing in both the Times Herald and Morning News.

I still recall a travelogue he wrote in about 1964 for SI extolling the beauty and virtues of Austin and the Hill Country, not a word about sport but such a work of love for a place that I immediately started thinking about moving there. In 1965 I did so. He was right, it was quite a place. At the time I could not have imagined that I would meet him one day and claim him as a good friend.

But back in ’68 Joe Brown and I were stranded in the Big Apple with several suit cases of Acapulco Gold. Our buyer had pulled a cross on us and we were in trouble, far away from home in a strange place, nearly broke, and carrying around a dangerous load. Joe called Bud who invited us to his swank high rise apartment where we stayed for several days as we moved the load. Bud had not only bought a couple of pounds but connected us with his gang at Elaine’s, the posh discothèque where we spent the evenings peddling the load by the pound and drinking. One of the lessons I learned was not to get into a drinking contest with pros like Bud and Joe. Needless to say I was very impressed with Bud the man and happy to add he and his lovely wife Doatsy to my list of new friends.

Our next encounters centered on the Mad Dogs, Bud’s drinking, doping, and social club in West Lake Hills. This was 1969 and I was playing drums with Shiva’s Head Band and renting a house in the super suburb. Members of the club who lived in the vicinity included Gary (Jap) Cartwright, Billy Lee Brammer, and Paula Sarnoff (most often the hostess for the wild parties which brought us together). And there were always visitors at our flings, some of them quite well known in literary circles as well as professional athletes.

During this time there was no public hangout for the likes of us in Austin and our band desperately needed a place to play. Eddie Wilson was the band’s manager and he had located the building that would become the Armadillo, but we could not afford to lease the place and convert it into a rock and roll dance hall. I took our plight to Bud, introduced him to Eddie and he wrote us a fat check which enabled us to launch the place. We sealed the deal with a shaker of martinis. Some of you may recall that Bud had a couple of rooms, one with a bar, reserved in the original ‘dillo, Bud’s private lair, Bubba meets Elaine’s.

I turned down an offer to manage the place and moved to Marin County soon afterward. My plans called for me to escape from the rock scene, not manage a club. This adventure lasted there for seven years, mostly in West Marin, one of the best times of my life. While there I met Peter Boyle who had just worked on Bud and Jap’s original flick, “Mad Dogs! You’re one of the Mad Dogs from Texas? Man, that movie was the most fun I’ve ever had. Those guys were unbelievable. You don’t happen to have any of that Austin weed do you?”

When I returned to Austin in 1976 the rumblings which led to Eddie’s ouster from the Armadillo were in place and he was looking to open a restaurant. Sure enough the Raw Deal was born, with Bud’s sponsorship and Eddie’s drive. Later the place was “sold” to Jim Smitham and Fletcher Boone and Eddie set about creating Threadgill’s, a real restaurant but not nearly as much fun.

The Raw Deal evolved into, as might be expected considering the personalities involved, quite a unique place. I especially liked the original little joint down across the creek from the police station. Bud and I spent many a night closing the place and draining whatever bottle(s) he had brought along. I didn’t know at the time that he had a degree in philosophy in addition to his English studies. His mind was quite profound. In addition to the obvious, Bud was the funniest man I have ever known.

Ultimately both he and Jap were informed by their physicians that they had to either stop drinking or die. Both of them were in pretty bad shape. You can’t have that much fun without paying a price. The ease with which they went onto and stayed on the wagon was remarkable. Give up booze? Nothing to it, only been doing it for 50 years. The quality of their work and their humor seemed to be unaffected. But there was a negative slant to their abstinence as well, as we never saw them around any more and the quality of the parties slid backward. I hadn’t seen him for many years although I had read his books and seen his movies.

And so it went. When I heard that he had cancer I thought seriously about driving to Austin to bid him farewell. Unfortunately I too had (have) the disease and was in no shape for such a cruise. Besides, what would we have done? Now that I have had a few days to digest his parting there is no sadness. There goes one of the good ones. I am sure that he handled death the same way he always handled adversity, with a quip and a grin. Although I care next to nothing about golf I am going to read “The Little Red Book” and expect to be entertained royally one more time.

[Gerry Storm, aka Mesmo, is a former Austin musician, activist and union leader who now lives in rural New Mexico where he contributes to The Rag Blog when he feels like it . His interests combine the political with the spiritual. ]

Please see Bud Shrake, 77 : This Texas Tall Tale is a Literary Legend by Bob Simmons, introduction by Thorne Dreyer (with links to other obits) / The Rag Blog / May 11, 2009