The South Austin Popular Culture Center, dedicated to the history of our town’s music culture, celebrates with Wonder Wart-Hog, ‘Peyote Dream,’ ‘Woman with a Blue Guitar,’ and more… 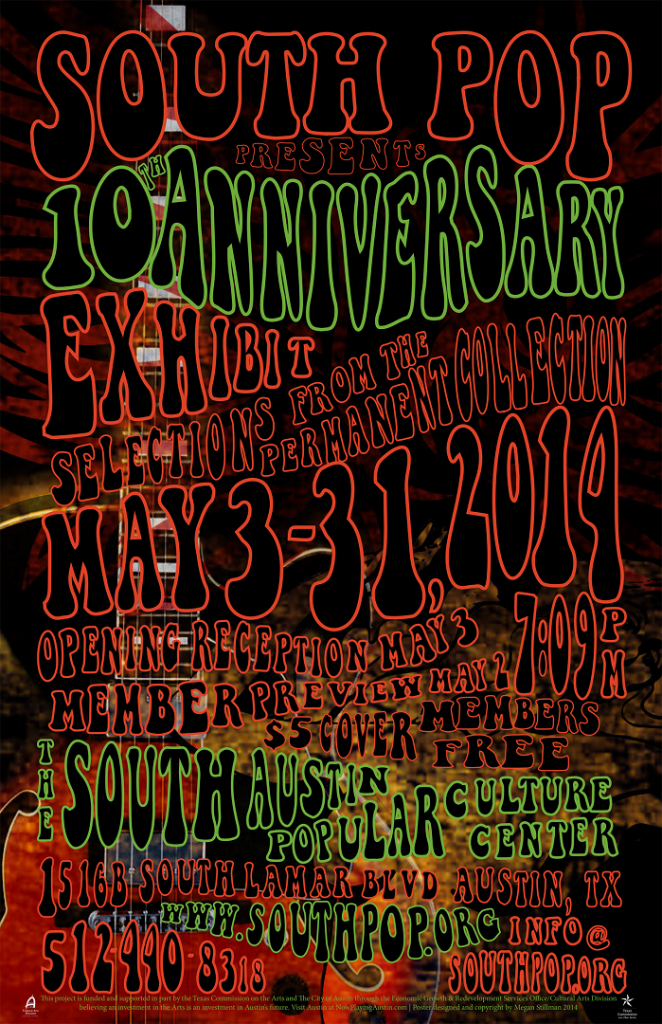 AUSTIN — The South Austin Popular Culture Center (SouthPop) is well into its month-long 10th Anniversary celebration exhibit (it ends May 31). The center, originally called the South Austin Museum of Popular Culture, is located at 1516-B S. Lamar in, appropriately enough, South Austin. The anniversary celebration honors the first 10 years of the center’s history with a selection of items cherry-picked from SouthPop’s 5,000-plus piece collection.

Attendees to the exhibit find a specially selected sampling of historical concert posters, original cartoon panels from the likes of Wonder Wart-Hog, and individual artwork like Sam Yeates’ “Woman with a Blue Guitar” and the center’s very first acquisition, Ken Featherston’s mural, “Peyote Dream.” In between the exhibited pieces the staff has mounted plaques describing the center’s origin and growth in its first decade.

As we like to say, “it’s been a long strange trip” since the summer of 2003 when a group of Austin “poster designers, artists, musicians, managers and muses” came together and decided to create a space for the preservation of “items related to the history of Austin’s music culture.”

They envisioned, organized, and got to work. They located items and artifacts, secured a nonprofit status, and obtained funding from the Phogg Foundation for the Pursuit of Happiness, which also provided the space on South Lamar.

By March 2004, “Peyote Dream” was on display in the center’s first official exhibit. Ken Featherston is also credited as the initial inspiration for the outside Memorial Wall, first unveiled in November 2004. The wall honors artists, musicians, writers, and others who played a major role in Austin’s cultural history and have since passed away. 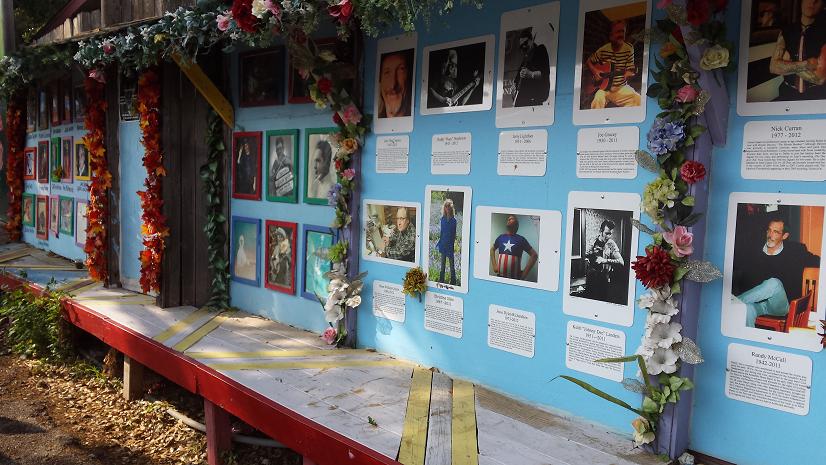 By 2005 the center began to get its footing in the community as an “official steward of Austin’s counterculture identity” with exhibits featuring the works of friends and Armadillo Art Squad Artists as well as photos, posters, and other items donated by local collectors.

In 2007, SouthPop increased its community presence and improved its outside ambience by installing a mural behind the stage (painted by Kerry Awn with friends Tommy Bee and RickTurner). With that addition, Awn and friends’ homage to Austin comix and cartoon characters became the backdrop for the center’s live Saturday night parking lot music events that usher in each of the museum’s new exhibits.

Meanwhile, in May 2012, the South Texas Popular Culture Center was founded in San Antonio by Margaret Moser and Michael Ann Coker, in association with Austin’s SouthPop.

In a recent conversation, Leea Mechling, the center’s executive director, talked about ongoing challenges, the most pressing of which is the need for additional space. She spoke of some of the important pieces, like the original Armadillo World Headquarters sign, that have to be stored away unseen due to limited exhibit space. We spoke of favorite artists and the many ways, both official and unofficial, the the center’s staff supports them. Unfortunately, she says, the Artist in Residence program is not currently benefiting any artist because of, again, lack of space.

Plans to remedy that are occupying the time and energies of the center’s staff and board members. Their goal is to secure a larger site for bigger exhibits (and parking) that they can eventually purchase. Meanwhile, while the search for a larger site goes on, the center’s staff will begin work with Alejandro Escovedo. With him they will create exhibits that promote local musicians as well as focus on Alejandro’s amazing and historical career.

In order to be a truly integral part of its community, it is said a museum must do four things: it must fit in, it must express a unique identity, it must make its community members feel welcome. and it must grow. I’d say our own South Austin Popular Culture Center has mastered all of these things now… and it’s not through evolving yet.