What we’re doing is a nice, green, eco-conscious bit of ‘walking the walk.’ 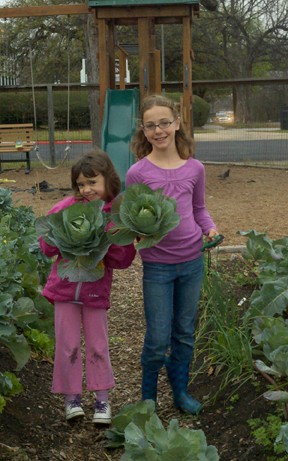 Photos from the Cherrywood group of farms by Paige Oliverio.

AUSTIN — We grow food in our neighborhood. It’s not a huge amount, and there aren’t many of us yet, but we’re learning how to feed each other. For the long term, it is a bid for sustainability, healthy food, community, and local empowerment. Cherrywood Farm is urban agriculture for the people.

At the very least, what we’re doing is a nice, green, eco-conscious bit of “walking the walk” after so much talk about resource limits and chronic mistreatment of Mama Gaia at the hands of industrial capitalism. But it’s also a political act, in the best tradition of lefty liberation. The proposition is this: the more that real people grow real food for each other, the less dependent we are on the food industry, on the petroleum that drives it, and on the wage system that monopolizes our most basic economic activity — the getting of food.

Our farm operates as a cooperative CSA (community supported agriculture), where members subscribe at the beginning of a growing season and receive a share of fresh produce and eggs on a regular basis. Share distributions take place every other week through the two 18-week growing seasons in a year. We’re talking real food, zero food-miles, right here, independent of the semis that have to keep rolling night and day in order to keep the store shelves full. 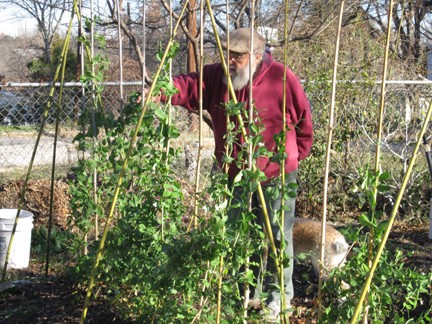 We currently have 20 families taking part. Subscription payment can be cash, work, or half and half. All the farm work is done by members, so we need a good balance among the types of participation to make sure we have our labor needs covered, as well as sufficient operating funds. After five successful seasons, the mix has gotten pretty well established. Day-to-day work is coordinated by our lead farmers and carried out cooperatively, so members don’t necessarily need advanced skills to enjoy success at growing vegetables.

Our fields are located in the backyards of our land-host members.

Our fields are located in the backyards of our land-host members, which brings up one other way to participate. Land hosts receive a full regular share of produce in exchange for turning over a piece of their homestead for common growing space. We have eight locations throughout Austin’s Cherrywood neighborhood, including a “showcase” field at In.Gredients, a packaging-free natural foods store on the south edge of our territory. Fields average about 750 square feet and incorporate techniques for intensive cultivation and minimal water use — an important feature for growing things in Texas. 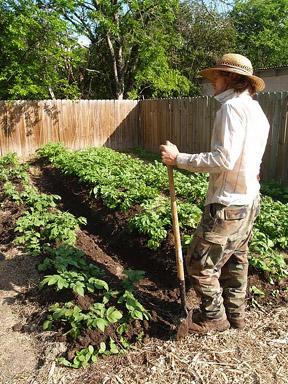 Cherrywood Farm is part of Urban Patchwork, a non-profit that helps organize neighborhood farms, providing expertise, discount seed and supplies, insurance, and advocacy at City Hall. Some of the city’s water policies, for example, are a lot more farm-friendly as a result of Urban Patchwork’s efforts.

In Austin, conditions are ripe for taking urban agriculture to the next level. Neighborhood identity and activity are both very strong here, with a great deal of public and municipal support. Local farms in the Austin area, some of them operating as CSAs, enjoy an increasing number of customers, both on-site and at weekly farmer’s markets around the city. It’s a natural next step, then, to do a lot more of the growing in the neighborhoods themselves.

It’s a small start, but in time, the practice of growing food where it is eaten could be extensive enough to keep us all happy and well-fed even when the top-heavy, oil-dependent industrial food-supply system gets the shakes and starts missing deliveries.

Mere mention of the prospect generally sends the business-as-usual crowd into fits, but as the empire continues to unravel, it will be harder and harder to ignore the need for local resilience and food security. Slow decline is harder to spot than, say, a nice, spectacular zombie apocalypse, but it does offer more time to learn and adopt serious food production on a local scale.