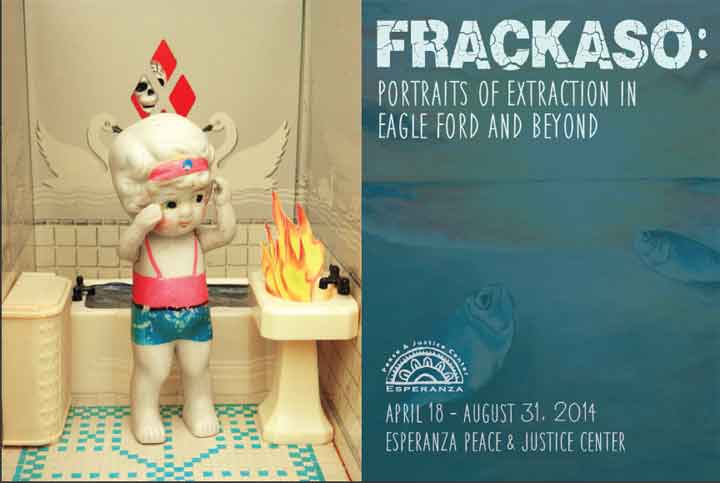 SAN ANTONIO — An art exhibit opening Friday, April 18, at the Esperanza Peace & Justice Center in San Antonio features photographs, visual and literary art, installations, performance, and film. Frackaso: Portraits of Extraction in Eagle Ford and Beyond takes on the fracking frenzy in South Texas and, well, beyond.

The exhibit’s title is a clever play on the Spanish word for disaster — fracaso — and the English word for disturbance — fracas. The show will highlight one of the country’s most active gas extraction sites — the Eagle Ford shale deposits near San Antonio — from the perspective of those who will not profit from this aggressive mining activity. 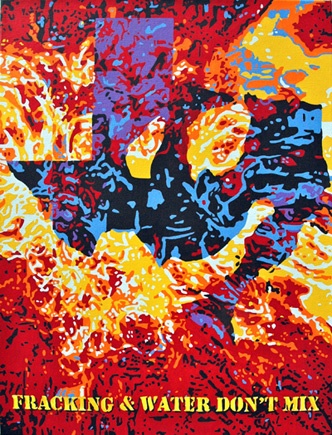 Frackaso will feature work by artists from Canada to Mexico and New York to South Texas, working in many genres. Austin artists include Liliana Wilson, Carlos Lowry, and Cruz. Liliana Wilson’s work is the cover art on the Esperanza Center’s April issue of La Voz de Esperanza.

Several visual and performance pieces, including a short documentary on San Antonio’s Calumet refinery, Frack U, Mexico, by Gregory “Gringoyo” Berger, will be featured at the opening. The Frackaso exhibit will run through August 2014.

For regional readers unfamiliar with the Esperanza Peace & Justice Center (EPJC), the exhibit provides an opportunity to get acquainted with one of Texas’ venerable institutions — a community committed to “a world where everyone has civil rights and economic justice, where the environment is cared for, where cultures are honored and communities are safe… advocates for those wounded by domination and inequality.”

For decades, EPJC has been at the center of progressive change in San Antonio. Go to Esperanza’s website and find them on Facebook.