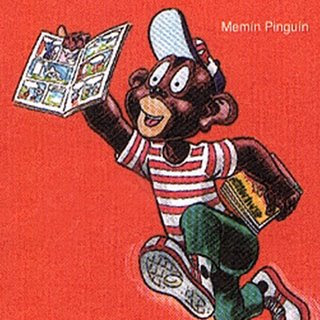 Beloved by Mexicans for his dim wits, street smarts and playful disposition, long-running comic book character Memín Pinguín — a little black boy whose face resembles a monkey — is at it again.

His zany adventures chronicled in a hugely popular book series for decades are up for sale at your neighborhood Wal-Mart store in the Libros en Español section, right next to the store’s cadre of African-American books.

By Shawnedria McGinty’s American standards, the image was shocking. The African-American woman who was shopping at the store on South Post Oak over the weekend immediately asked a store manager to remove the books from the shelves. A manager told her he would comply.

But as of Monday afternoon, the books were still on the shelves at many Houston stores, prompting community activist Quanell X to demand that Wal-Mart apologize for selling the racially charged books.

“Even Hispanics of conscious minds sense this is racist and that to sell this is totally unacceptable,” said Quanell X, who spoke in front of the Wal-Mart on South Post Oak and demanded officials issue an apology. “It is a disgrace — it’s an insult to all African-Americans.”

Quanell X, who was contacted by McGinty, requested a meeting with regional Wal-Mart officials.

A Wal-Mart spokesman said the books were removed late Monday at the Meyerland location, but would not say if the comic books would be pulled at other Houston locations. A Houston Chronicle reporter bought three Memín comic books for $7.44 each at another Wal-Mart on Dunvale.

“We will be evaluating the best course of action,” said Phillip Keene, a company spokesman.

Memín is no stranger to controversy. In 2005, the Mexican postal service released a series of new stamps commemorating the comic book character, who debuted in the 1940s. The stamps sold out quickly, but the debate endured and swirled between the U.S. White House and the Mexican White House.

To some in America, Memín’s stereotypical image of exaggerated lips and ape-like characteristics represents a racist period in the nation’s history when black-face characters were popular.

The stamps were deemed offensive by President Bush and a number of American leaders, including civil rights icon Jesse Jackson. Former Mexican President Vicente Fox said he didn’t understand what all the fuss was about and insisted that Memín’s image was not racist, but a beloved character embraced by all Mexicans.

“When you read the stories, he’s always the hero — he saves the day,” said Raul Ramos, professor of Mexican-American history at the University of Houston, who added that the racial dynamics in Mexico — where stereotypical “Sambo” characters do not exist — are far more complex than in the U.S. “He’s kind of the Charlie Chaplin figure, the rascal who is able to overcome the difficult situations. So he’s a very populist character in that way.”

Omar G., 45, who was shopping at the Meyerland Wal-Mart with his four American-born children, said he did not want his children to read it.

“I grew up reading the comic book as a kid in Mexico, but for here, it is offensive for some people,” said Omar, who did not want his last name published. “To see it here in Wal-Mart, I am surprised.”

Mexican postal officials said the five-stamp series features Memin Pinguin, a character from a comic book created in the 1940s, because he is beloved in Mexico. A spokesman for the Mexican Embassy described the depiction as a cultural image that has no meaning and is not intended to offend.

“Just as Speedy Gonzalez has never been interpreted in a racial manner by the people in Mexico,” embassy spokesman Rafael Laveaga said. “. . . He is a cartoon character. I am certain that this commemorative postage stamp is not intended to be interpreted on a racial basis in Mexico or anywhere else.”

But the leaders of the NAACP, the Rainbow/PUSH Coalition, the National Council of La Raza and the National Urban League denounced the image in strong terms, calling it the worst kind of black stereotype. The curator of a Michigan museum that collects Jim Crow memorabilia said the Memin Pinguin caricature is a classic “pickaninny” — a black child, oafish and with apelike features.

“It is offensive,” said the Rev. Jesse L. Jackson of the Rainbow/PUSH Coalition, who like other leaders called on Mexican President Vicente Fox to apologize and stop circulation of the stamps. Jackson vowed to lead a demonstration at Mexican consulates if Fox does not do so.

It was the second time in seven weeks that Jackson called on Fox to apologize for a racial offense. In May, Fox apologized for saying that Mexican migrants in the United States work jobs that “even blacks don’t want,” a comment he said was taken out of context.

Marc H. Morial, executive director of the National Urban League, joined Jackson in calling on President Bush and Secretary of State Condoleezza Rice to denounce the stamps. “It’s outrageous, it’s offensive, and it really raises the question of whether President Fox’s apology was sincere and meaningful,” Morial said.

Janet Murguia, president of the National Council of La Raza, said it is “impossible to overstate how appalled and offended I am, not only by the stamp but by the reaction of the Mexican postal service.” She added: “Hispanic Americans and all other Americans will and should be equally outraged.”

David Pilgrim, curator of the Jim Crow Museum of Racist Memorabilia at Ferris State University in Big Rapids, Mich., said images such as that of Memin Pinguin are prolific in Mexico, Latin America and Japan. “I’m disappointed but not shocked,” he said. “This is consistent with what we in the United States would refer to as a pickaninny image. It’s disappointing when you find a government putting its stamp on racism.”

Memin Pinguin:
The Structural Violence of an Image

1 Response to Mexican Comic and Stamps Draw Charges of Racism