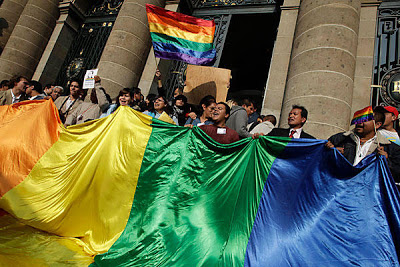 In Morelia, Michoacan, Bishop Alfredo India added to the homophobic frenzy by avowing that even dogs did not engage in same sex fornication.

MEXICO CITY — As Valentine’s Day approaches, stationary stores in the old quarter of this megalopolis are awash with Cupids and hearts and the effusive iconography of romance. Ten-tiered wedding cakes spire to the chandeliers in the windows of the Ideal, the palace of such confectionary extravaganzas.

Down the block, beribboned classic cars are lined up outside La Profesa, a colonial church much favored for high society weddings. Marriage is merchandise for the Roman Catholic Church — priests charge sumptuous (30,000 pesos) fees for tying the knots.

Meanwhile, Church and State, ancient rivals for the affections of the Mexican people, are nose-to-nose over who exactly can marry whom.

The Princes of the Catholic Church are aghast at the recent vote of the Mexico City Legislative Assembly to legalize same sex marriage that in their jaundiced vista has transformed this megalopolis into one monstrous Sodom and Gomorrah. This past December 21, local legislators, led by the left-center Party of the Democratic Revolution (PRD) which holds a lopsided majority in the Assembly voted 39 to 20 to amend the city’s civil code by modifying the definition of marriage, striking down language that restricted such coupling to a man and a woman, and upgrading civil unions (“societies of conviviality”) between lovers of the same sex to matrimony.

The new law also specifically stipulates that same sex couples can adopt children, a right they previously enjoyed — any Mexican can adopt a child so long as they are 17 years older than the adoptee — but which has the Church’s testicles in a major uproar.

In the aftermath of passage, the scene in the old, ornate chambers of the Legislative Assembly was one of widespread jubilation — with pockets of bitter recrimination. Up in the balconies, gays and lesbians smooched and waved enormous rainbow flags. Down on the Assembly floor, the right-wing PAN party delegation led by Mariana Gomez, cousin of first lady Margarita Zavala, stomped out, threatening to take the notorious changes in the civil code straight to the Supreme Court.

Like with passage of such liberalizing social measures as free abortion on demand, a right to die act that promotes euthanasia, and the aforementioned civil unions, both the PAN and its perpetual allies in the Catholic hierarchy have gone ballistic at the prospect of homosexual nuptials.

Under the vaulting arches of the ancient Metropolitan Cathedral, Cardinal Norberto Rivera, the shepherd of the most populous archdioceses in Christendom, condemned same sex marriage as an “aberration” that “will invariably lead to the ruin of society” and called upon Mexico’s Catholics to disobey the new law, an edict that spurred threats by “Jacobins” as secularists are quaintly maligned by Holy Mother Church, to take the Cardinal to court on charges of “treason.” Grievously offended, Rivera protested that leftists are “trying to prohibit us from speaking in the name of Jesus Christ.”

Such Church-State conflicts have stippled the history of this neighbor republic since it declared its independence from the Spanish Crown 200 years ago this year, a bicentennial that is being celebrated with much hoopla here and which the Church demands a piece of despite separation from the Mexican State that has been defined as a secular institution by three of its Constitutions.

If a child has two fathers which one would be his role model, inquisitioned Father Valdemar? Would he emulate his parents by wearing make-up and mini-skirts? In Morelia, Michoacan, Bishop Alfredo India added to the homophobic frenzy by avowing that even dogs did not engage in same sex fornication.

The Catholic Church was hardly alone in its vivid vindictiveness. Both Antonio Chaudruhi, Patriarch of the Orthodox Church, and Arturo Favela, president of the Confraternity of Christian Churches, joined in denouncing such “sinfulness.”

The Mexico City Archdioceses’ hypothesis that same sex couples are child molesters is a textbook exhibition of the Church’s malignant hypocrisy. Recent scandals involving pederast priests have stained the hierarchy’s reputation and depleted its coffers. The Legionnaires of Christ have paid out millions USD to compensate victims of the order’s founder and serial sodomist Macial Marcial. (The omnisexual priest also fathered children with three different women.)

Cardinal Norberto himself has been implicated in multiple imbroglios — as Bishop of Tehuacan Puebla and Mexico City, Rivera personally shielded Father Nicolas Aguilar, accused of as many as 600 incidents of pedophilia by moving him from parish to parish, ultimately shipping him off to Los Angeles where Cardinal Roger Mahoney continued the subterfuge. Mahoney and Rivera have been called to account for their cover-up by authorities in both countries.

Separation of Church and State as mandated by the Mexican Constitution has narrowed dramatically in the 10 years that the PAN has held the presidency. Vicente Fox, the first opposition party candidate to take power, campaigned literally wrapped in the banner of the Virgin of Guadalupe and stunned so-called Jacobins by kneeling to kiss Pope John Paul II’s ring during the late pope’s last visit to Mexico. His successor, Felipe Calderon, whose Catholic zealot father was a hero of the “Cristero War” against the federal government that took 30,000 lives between 1925 and 1929, shares the podium with high Church officials at Vatican-sponsored venues such as the 2008 Catholic Families Congress in Mexico City.

The PANista governor of Jalisco lavishes state funds to refurbish churches that served as sanctuaries for the “Cristeros” and the governor of Mexico state Enrique Pena Nieto, the frontrunner for the once and future ruling PRI party’s nomination in 2012 presidential elections, just returned from a pilgrimage to Rome to obtain Pope Benedict’s blessing for his impending marriage to soap opera mega-star Angelica Rivera (no relation) AKA “La Gaviota” (“the Seagull”).

When Mexico City legalized abortion in the first 12 weeks of gestation, Cardinal Rivera ordered the capital’s churches to ring their bells in mourning. Collaboration between the PAN and the PRI has resulted in the criminalization of abortion in 18 states and the two parties are expected to soon announce the introduction of a constitutional amendment to outlaw the procedure everywhere in Mexico, including the capital.

Despite raging homophobia in the provinces, Mexico City remains an oasis of sexual liberation. Men holding hands and women soul kissing women in public no longer invoke horrified stares in this cosmopolitan capital where every June since the Stonewall riots convoked the movement for gay, lesbian, and transgender rights, tens of thousands march and party to celebrate their sexual orientation.

Despite the PAN’s and Cardinal Norberto’s obstreperous recriminations, in a recent survey of the right-wing party’s own base in preparation for an upcoming lawsuit to nullify same sex marriage when it kicks in March 4, half of those polled supported the new law — although 70% vehemently opposed adoption.

As the tide shifts north of the border where six U.S. states, the nation’s capital, and one Canadian province now provide legal cover for same sex marriages and unions, in Latin America, a bastion of virulent Machismo, the times too are a-changing. Uruguay and Colombia have put a legal stamp on such arrangements, as have three provinces of Buenos Aires and a Brazilian state. Cuba, led by President Raul Castro’s daughter Mariela, is moving in the same direction. Mexico City was not even Mexico’s first jurisdiction to approve such legislation — Coahuila in the north held its first same sex wedding three years ago.

This Valentine’s Day all over the Latin continent, gays and lesbians will be exchanging hearts and flowers and vows of undying love as they hand out slices of wedding cake to celebrate unholy matrimony.