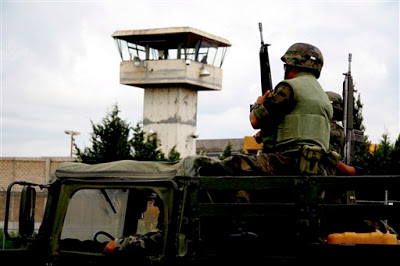 MEXICO CITY — Last May, in a meticulously planned raid reminiscent of classic guerrilla jail breakouts that are legend in Latin America, a commando of 20 heavily armed fighters freed 53 comrades from a prison in the northern state of Zacatecas. Were the perpetrators in fact guerrilleros from some as-yet unknown revolutionary foco or narcos emulating a guerrilla-style jailbreak intent on freeing their own?

Recent assassination attempts against high-ranking state officials — Sinaloa’s Secretary of Tourism (successful), Coahuila’s Attorney General (the restaurant at which he was dining with a Texas mayor was sprayed with automatic weapon fire), and a Baja California finance undersecretary (hung by the neck from a Tijuana freeway overpass) — suggest revolutionary retribution in a year that marks the 100th anniversary of the Mexican Revolution in which jitters of new uprisings are legion — January 1st was welcomed in with anarchist bombs, sabotage, and “expropriations” in Mexico City and Tijuana on the northern border.

Although the incidents cited suggest revolutionary subversion, they were all the handiwork of Mexico’s five narco cartels locked in an intractable war with both President Felipe Calderon’s military and federal police — and reportedly hundreds of U.S. drug warriors — that has now taken more than 19,000 lives since December 2006.

The jail breakout in Zacatecas and the Sinaloa and Coahuila shootings are attributed to the syndicates headed by Joaquin “El Chapo” Guzman, his former associates in the Beltran Leyva gang, and the notorious Zeta cartel.

The hanging of Baja California state finance official Rogelio Sanchez Jimenez was charged to a blood-drenched capo Teodoro Garcia Simentel aka “El Teo” or “Three Letters” who is deemed responsible for hundreds of hangings, beheadings, and excessively violent homicides — an associate, Santiago Meza (“El Pozalero”) has reportedly confessed to dissolving 300 victims in vats of acid — most allies of the fading Arellano Felix clan with whom El Teo is contesting Tijuana.

Simentel was captured this past January 14 in an upscale residential neighborhood of La Paz in adjouning Baja California Sur state, the second top-rung narco purportedly taken down by Mexican authorities in a month. The bust earned bouquets of kudos from Washington, which is financing Calderon’s drug war under the $3,000,000,000 Merida Initiative.

The U.S, role in the capture of El Teo and Arturo Beltran Leyva, “the Boss of Bosses” who was gunned down by Mexican marines December 16, appears to have been purposefully downplayed. According to an unidentified member of Calderon’s Security Cabinet as reported by Gustavo Castillo, a La Jornada correspondent with exceptional sources, Simentel was located by the U.S. Department of Homeland Security’s Immigration and Customs Enforcement, a first indication that ICE is now being deployed in Mexico’s drug war.

The Drug Enforcement Administration and the FBI are also thought to have armed agents on the ground here under provisions of the Merida Initiative and the North American Security and Prosperity Agreement.

The Calderon government vehemently denies that participation of U.S. agents led to the capture of El Teo or Beltran Leyva although it acknowledges enhanced cooperation between the two nations’ drug fighters. The suggestion that Washington has assets on the ground here is not acceptable to many Mexicans whose country has been repeatedly invaded and even annexed by U.S. troops, and is regarded as a violation of national sovereignty.

The number of U.S. security agents working in Mexico is closely held but observers of Washington’s presence here such as specialist Jorge Camil affirm that it has been rising dramatically since the 9/11 terror attacks on New York and Washington and now totals in the hundreds. The DEA and the FBI now have offices in provincial capitals such as Tuxtla Gutierrez Chiapas, close to the Guatemalan border and multiple smuggling routes.

Mexico is not only in the crosshairs of the U.S. security apparatus because of the flourishing drug trade — the infiltration of terrorists across the porous border also excites attention although all reported incidents to date have proven to be false alarms.

Of increasing interest to Washington is the possible alliance of narco gangs with Mexico’s fledgling guerrilla cells, an interpolation of the Colombian model.

The concept of narco-guerrilla coalescence was first proffered in the mid-1980s soon after Ronald Reagan officially proclaimed the War on Drugs. Then-veep George H.W. Bush, a Navy man, was placed in charge of overseeing interdiction efforts in the Caribbean to stop the Colombian cocaine flow into the southern United States.

Under Bush’s watch, intelligence reports placed the onus on the Marxist-Leninist Revolutionary Armed Forces of Colombia (FARC), the Army of National Liberation (ELN), and M-19, a left nationalist movement later decimated by the Colombian army, for extending protection to such world-class kingpins as Pablo Escobar.

The truth was, however, more diffuse: paramilitary units such as the United Auto-Defenders of Colombia (AUC) armed by right-wing rural “terratenientes” (rich land owners) and the Colombian military were the big players in the so-called “narco-guerrilla” although several FARC fronts openly provided protection to the druglords.

The narco-guerrilla thesis eventually became the underlying reason d’etre for Plan Colombia in which the twin wars on drugs and terrorism were married. Since the late 1990s, Washington has pumped billions into Colombia to sustain this counter-insurgency strategy. The Merida Initiative, signed in that Yucatan city by George Bush and Felipe Calderon in 2007, is often referred to as Plan Mexico. As recipients of billion dollar boodles in U.S. drug war largesse, Colombia’s Alvaro Uribe and Mexico’s Calderon are Washington’s most significant allies on a continent where the left has taken power in a majority of countries.

Today, despite a decade of Plan Colombia, Colombian cocaine production has held steady and the FARC ranks as Latin America’s most powerful narco-guerrilla. Although Mexico has no known counterpart, FARC activities here are closely monitored. FARC offices were shuttered during the presidency of Vicente Fox (2000-2006) — the FARC and Colombian president Andres Pastrana entabled negotiations in Mexico City in the 1990s.

A Colombian-born National University graduate student was deported to Bogotá last year on terrorism charges for sympathizing with the FARC and Uribe has issued extradition warrants for a Mexican student who survived the bombing of the Ecuadorian jungle camp of FARC leader Raul Reyes (not his real name) in 2008.

One connection: FARC operators are said to consort with the Valle del Norte Cartel, the main Colombian supplier for El Chapo‘s Sinaloa Cartel. A purported 2007 jungle tete a tete between Reyes, and an unidentified cartel representative suggested the possibility that the Sinaloa boys would buy cocaine directly from the Colombian rebels rather than deal with a series of middlemen suppliers. 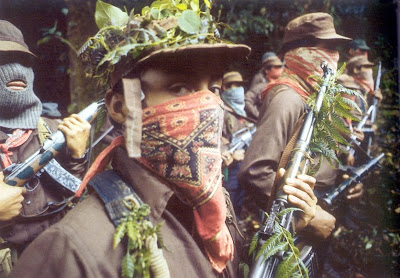 Mexico’s homegrown guerrilla bands have their roots in the north of the country where this distant neighbor nation’s 1910-1919 revolution first germinated — revolutionary martyrs Francisco Madero, Pancho Villa, Venustiano Carranza, and Alvaro Obregon were all northerners who marched their armies south to seize power.

In 1965, Arturo Gamiz, a disaffected rural schoolteacher, and 12 rebels laid siege to army barracks in Ciudad Madero, Chihuahua — all were killed in the assault. Six years later, the September 23rd Communist League based in the northern industrial city of Monterrey took its name from the date of the assault — 15 armed groups of which the September 23rd league was the most prominent operated throughout Mexico in the 1970s. The Forces of National Liberation (FLN), also based in Monterrey, gave birth to the EZLN in Chiapas. A sister guerrilla, the Villista Army of National Liberation in Chihuahua was never consolidated.

Conditions in the north of Mexico where both the narco cartels and the military concentrate their forces are propitious for a resurgence of guerrilla activity. Unemployment in the region, driven by the decline of the maquiladora industry (many assembly plants have moved to China), is at a 15-year high. The rural economy has been eclipsed by neo-liberal adventures such as the North American Free Trade Agreement and the deepening recession, the worst in 80 years, is forcing campesinos to abandon their land. A hundred years ago in this vast, mineral-rich region of deserts and scarred mountains, landless peasants and displaced farmers formed the nucleus of Pancho Villa’s revolutionary army.

In 2010, many survive the economic crisis by turning to drug cropping — a half million Mexicans are said to earn their living in the drug economy. One indication of increasingly close ties between militant farmers and the drug cartels was the slaying of Margarito Montes Parra, longtime leader of the leftist UGOCEP (General Popular Union of Workers and Farmers) who was ambushed by cartel gunmen in Ciudad Obregon last fall.

Widespread human rights abuses by federal troops who combat the narcos along the northern border has provoked a wave of anti-army, anti-government anger in many northern states and conditions for a Gamiz-like assault on military installations cannot be discounted should drug gangs and armed radicals find common cause.

For prospective guerrilla formations, alliance with narcos has its perks: weapons and money. Both the narcos and the radicals are interested in subverting the state although their motives may be distinct. For anti-imperialist revolutionaries, poisoning the Yanquis with drugs is a weapon of class war. But negatives abound: everything the cartels touch is corrupted by profit-driven mercantile greed that is at odds with revolutionary ideals — although there are always those who will argue that the end justifies the means.

For Homeland Security and Washington’s security apparatus, the nightmare prospect of a coalition of narcos and guerilleros cruising the border is reason enough to sustain agents on the ground south of the border whether or not Mexican authorities are prepared to admit their presence.

Indeed, this January, Obama’s Justice Department announced the merger of its International Terrorism and Narcotics investigation units to prepare for just such an eventuality. The vision of Mexico as a potentially failed narco-state advanced by the Pentagon and the Joint Chiefs of Staff in a 2008 evaluation is a five-star national security issue for Washington and the option of a U.S. preventative invasion is always on the table.

[John Ross continues to slog across Obama’s America now in the second month of his monster book tour. Ross and El Monstruo — Dread and Redemption in Mexico City will visit St. Louis April 4-7, and Millsaps College in Jackson, Mississippi on April 9 for a symposium on Mexico City. He will tour Baltimore, Washington, New York, and Boston April 19 through May 1. For details write johnross@igc.org.]