MI5: No Easy Way to Identify a Terrorist in Britain

I don’t suppose that George W. Bush’s minions will bother reading this for the purpose of learning something meaningful about terrorism. The dogma in this administration precludes actually seeking the truth (about anything at all). 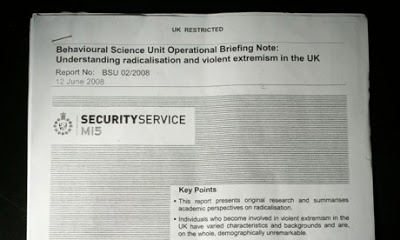 Exclusive: Sophisticated analysis says there is no single pathway to violent extremism

MI5 has concluded that there is no easy way to identify those who become involved in terrorism in Britain, according to a classified internal research document on radicalisation seen by the Guardian.

The sophisticated analysis, based on hundreds of case studies by the security service, says there is no single pathway to violent extremism.

It concludes that it is not possible to draw up a typical profile of the “British terrorist” as most are “demographically unremarkable” and simply reflect the communities in which they live.

The “restricted” MI5 report takes apart many of the common stereotypes about those involved in British terrorism.

They are mostly British nationals, not illegal immigrants and, far from being Islamist fundamentalists, most are religious novices. Nor, the analysis says, are they “mad and bad”.

Those over 30 are just as likely to have a wife and children as to be loners with no ties, the research shows.

The security service also plays down the importance of radical extremist clerics, saying their influence in radicalising British terrorists has moved into the background in recent years.

The research, carried out by MI5’s behavioural science unit, is based on in-depth case studies on “several hundred individuals known to be involved in, or closely associated with, violent extremist activity” ranging from fundraising to planning suicide bombings in Britain.

The main findings include:

• The majority are British nationals and the remainder, with a few exceptions, are here legally. Around half were born in the UK, with others migrating here later in life. Some of these fled traumatic experiences and oppressive regimes and claimed UK asylum, but more came to Britain to study or for family or economic reasons and became radicalised many years after arriving.

• Far from being religious zealots, a large number of those involved in terrorism do not practise their faith regularly. Many lack religious literacy and could actually be regarded as religious novices. Very few have been brought up in strongly religious households, and there is a higher than average proportion of converts. Some are involved in drug-taking, drinking alcohol and visiting prostitutes. MI5 says there is evidence that a well-established religious identity actually protects against violent radicalisation.

• The “mad and bad” theory to explain why people turn to terrorism does not stand up, with no more evidence of mental illness or pathological personality traits found among British terrorists than is found in the general population.

• British-based terrorists are as ethnically diverse as the UK Muslim population, with individuals from Pakistani, Middle Eastern and Caucasian backgrounds. MI5 says assumptions cannot be made about suspects based on skin colour, ethnic heritage or nationality.

• Most UK terrorists are male, but women also play an important role. Sometimes they are aware of their husbands’, brothers’ or sons’ activities, but do not object or try to stop them.

• While the majority are in their early to mid-20s when they become radicalised, a small but not insignificant minority first become involved in violent extremism at over the age of 30.

• Far from being lone individuals with no ties, the majority of those over 30 have steady relationships, and most have children. MI5 says this challenges the idea that terrorists are young men driven by sexual frustration and lured to “martyrdom” by the promise of beautiful virgins waiting for them in paradise. It is wrong to assume that someone with a wife and children is less likely to commit acts of terrorism.

• Those involved in British terrorism are not unintelligent or gullible, and nor are they more likely to be well-educated; their educational achievement ranges from total lack of qualifications to degree-level education. However, they are almost all employed in low-grade jobs.

The researchers conclude that the results of their work “challenge many of the stereotypes that are held about who becomes a terrorist and why”.

Crucially, the research has revealed that those who become terrorists “are a diverse collection of individuals, fitting no single demographic profile, nor do they all follow a typical pathway to violent extremism”.

The security service believes the terrorist groups operating in Britain today are different in many important respects both from Islamist extremist activity in other parts of the world and from historical terrorist movements such as the IRA or the Red Army Faction.

The “UK restricted” MI5 “operational briefing note”, circulated within the security services in June, warns that, unless they understand the varied backgrounds of those drawn to terrorism in Britain, the security services will fail to counter their activities in the short term and fail to prevent violent radicalisation continuing in the long term.

It also concludes that the research results have important lessons for the government’s programme to tackle the spread of violent extremism, underlining the need for “attractive alternatives” to terrorist involvement but also warning that traditional law enforcement tactics could backfire if handled badly or used against people who are not seen as legitimate targets.

The MI5 authors stress that the most pressing current threat is from Islamist extremist groups who justify the use of violence “in defence of Islam”, but that there are also violent extremists involved in non-Islamist movements.

They say that they are concerned with those who use violence or actively support the use of violence and not those who simply hold politically extreme views.

Source, with an audio of the findings / The Guardian

This entry was posted in RagBlog and tagged Great Britain, Terrorism, War on Terror. Bookmark the permalink.