Michael Connell : The Suspicious Death of the Man Who May Have Rigged the 2000 Election 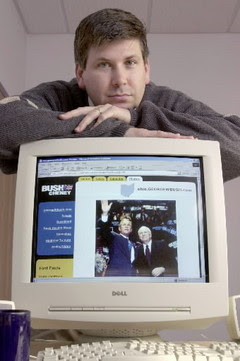 Michael Connell, the crucial techno- lynch pin in the theft of the 2004 election, and much more, is dead at the age of 45. His unnatural, suspicious death raises serious questions about the corruption of the American electoral process that now may never be answered.

Connell died Friday, December 19 when his Piper Saratoga plane crashed near his northern Ohio home. He was flying himself home from the College Park, Maryland airport. An accomplished pilot, flying in unremarkable weather, his death cuts off a critical path to much of what may never be known about how the 2004 election was shifted from John Kerry to George W. Bush in the wee hours of November 2. His plane crashed between two houses in an upscale neighborhood, one vacant, just 2.5 miles from the Akron-Canton airport.

A long-time, outspokenly loyal associate of the Bush family, Connell created the Bush-Cheney website for their 2000 presidential campaign. Connell may have played a role in various computer malfunctions that helped the GOP claim the presidency in 2000. As a chief IT consultant and operative for Karl Rove, Connell was a devout Catholic and the father of four children. In various interviews and a deposition Connell cited his belief that abortion is murder as a primary motivating factor in his work for the Republican Party.

Connell recently wrote the following in his New Media Communications newsletter, regarding Barack Obama’s election: “In our 230 year history, our democracy has suffered worse fates. It’s just that none come to mind right now.” Connell wrote: “This is just a moment in time and this too shall pass. Enduring is the fact that 2000 years ago, a babe was born in Bethlehem. When our Lord God sent his only Son for our salvation,…In spite of the current economic and political conditions, salvation is eternal.”

Ohio Republican Secretary of State J. Kenneth Blackwell hired Connell in 2004 to create a real-time computer data compilation for counting Ohio’s votes. Under Connell’s supervision, Ohio’s presidential vote count was transmitted to private, partisan computer servers owned by SmartTech housed in the basement of the Old Pioneer Bank building in Chattanooga, Tennessee. Connell’s company, New Media Communications worked closely with SmartTech in building Republican and right-wing websites that were hosted on SmartTech servers. Among Connell’s clients were the Republican National Committee, Swift Boat Veterans for Truth and gwb43.com. The SmartTech servers at one point housed Karl Rove’s emails. Some of Rove’s email files have since mysteriously disappeared despite repeated court-sanctioned attempts to review them.

In 2001, Michael Connell’s GovTech Solutions, LLC was selected to reorganize the Capitol Hill IT network, the only private-sector company to gain permission from HIR [House Information Resources] to place its server behind the firewall, he bragged.

At 12:20 am on the night of the 2004 election exit polls and initial vote counts showed John Kerry the clear winner of Ohio’s presidential campaign. The Buckeye State’s 20 electoral votes would have given Kerry the presidency.

But from then until around 2am, the flow of information mysteriously ceased. After that, the vote count shifted dramatically to George W. Bush, ultimately giving him a second term. In the end there was a 6.7 percent diversion—in Bush’s favor—between highly professional, nationally funded exit polls and the final official vote count as tabulated by Blackwell and Connell.

Until his death Connell remained the IT supervisor for six Congressional committees. But on the day before the 2008 election, Connell was deposed by attorneys Cliff Arnebeck and Bob Fitrakis about his actions during the 2004 vote count, and his continued involvement in IT operations for the GOP, including his access to Rove’s e-mail files and the circumstances behind their disappearance.

Various threats have been repeatedly reported involving Connell and other IT experts close to the GOP. On July 24, 2008, Arnebeck emailed Attorney General Michael Mukasey, stating: “We have been confidentially informed by a source we believe to be credible that Karl Rove has threatened Michael Connell, a principal witness we have identified in our King-Lincoln case in federal court in Columbus, Ohio,….”

Connell’s death comes at a moment where election protection attorneys and others appeared to be closing in on critical irregularities and illegalities. In his pre-election deposition, Connell was generally evasive, but did disclose key pieces of information that could prove damaging to Karl Rove and the GOP. Examining attorneys in the King-Lincoln-Bronzeville civil rights lawsuit, stemming from the 2004 election theft, were confident Connell had far more to tell.

There is widespread concern that this may be the reason he is now dead.

[Bob Fitrakis and Harvey Wasserman have co-authored four books on election protection, including AS GOES OHIO and HOW THE GOP STOLE AMERICAS 2004 ELECTION…, available at http://www.blogger.com/www.freepress.org, where this article first appeared. They are attorney and plaintiff in the King- Lincoln-Bronzeville civil rights lawsuit which subpoenaed and was deposing Michael Connell.]

2 Responses to Michael Connell : The Suspicious Death of the Man Who May Have Rigged the 2000 Election