Michael James :
A solo run west, ChicagoFest and Maxwell Street, and a taste for electoral politics, 1979

Halsted by Maxwell had a great hot dog stand which I frequented during late night hunger attacks for polish sausages smothered with grilled onions and hot peppers and greasy fries on the side. 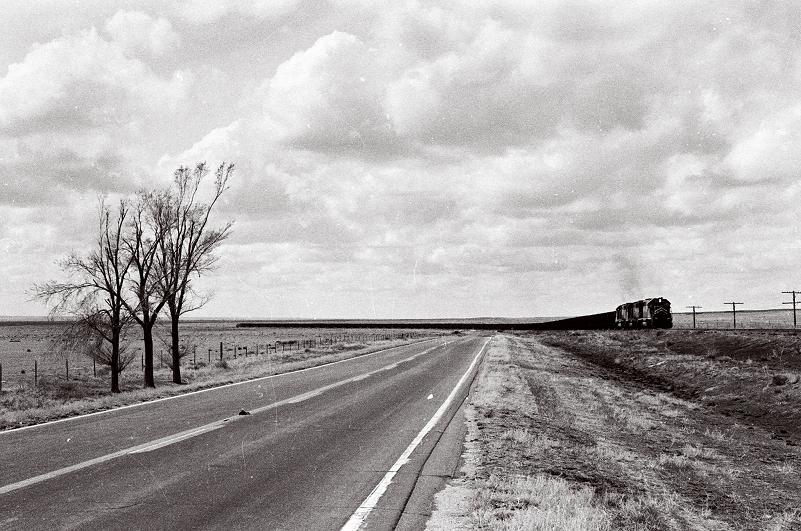 Long Train on the Plains, 1979. Photos by Michael James from his forthcoming book, Michael Gaylord James’ Pictures from the Long Haul.

Throughout 1979, work, politics, and travel commingled. The brutal winter blizzard that year brought me extracurricular work driving a dump truck and a small front loader to help remove the onslaught of paralyzing snow. When winter finally broke, I was in get-out-of-town mode; in April I embarked on a solo drive West.

A Ford Monte Carlo drive-away destined for the Bay Area provided my escape. The first night out I visited a Rising Up Angry comrade and good friend Mike McGraw, aka Mike Piranha, and his Piranha Brothers Band, who were rocking a bar called the Play-Mor in Milan, Illinois. 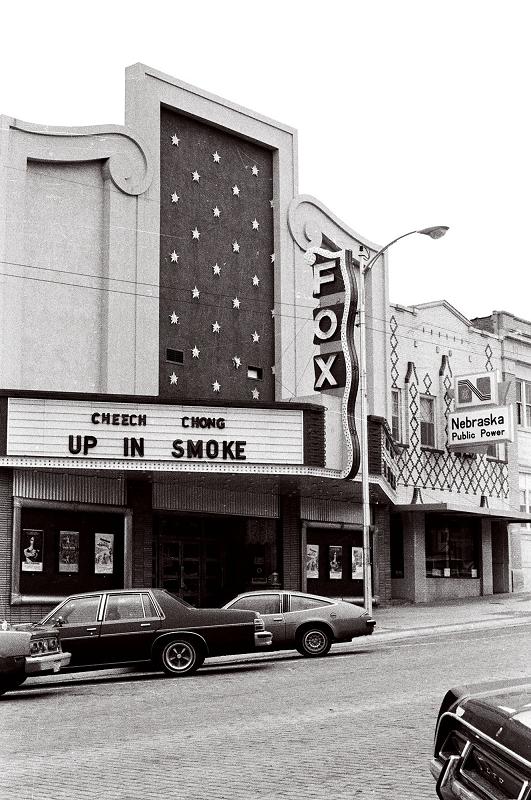 The next day I took a run along the Rock River, then headed west, driving over the Mighty Mississippi and through Iowa to reach snowy, icy Lincoln, Nebraska, by midnight. By the next evening I reached Durango, Colorado, where I stayed with friends and hung out for a couple of days.

Then, as I continued onward and was near Green River, Utah, a friendly trooper pulled me over. I happened to be taking a hit on a joint which I smoothly exchanged for a cigarette, lighting it up as I pulled over. I extinguished it as Officer Friendly approached the Monte Carlo. He gave me a speeding ticket while we chatted about politics and the Mormon Church. When we exchanging goodbyes my Mormon Trooper-Friend said, “Enjoy your cigarette.”

While on the West Coast old pal David Meggyesy and I took in his son Chris’s long jump event at a high school track meet in Muir Beach. Earlier that day we had observed two monks bowing and kissing the ground, prostrating as they inched up the coast, as their attendant in a black and white 1956 Plymouth station wagon followed behind. And I went down the coast to the Carmel Highlands for a couple of days that included an Easter egg hunt and party at the Williams family home. 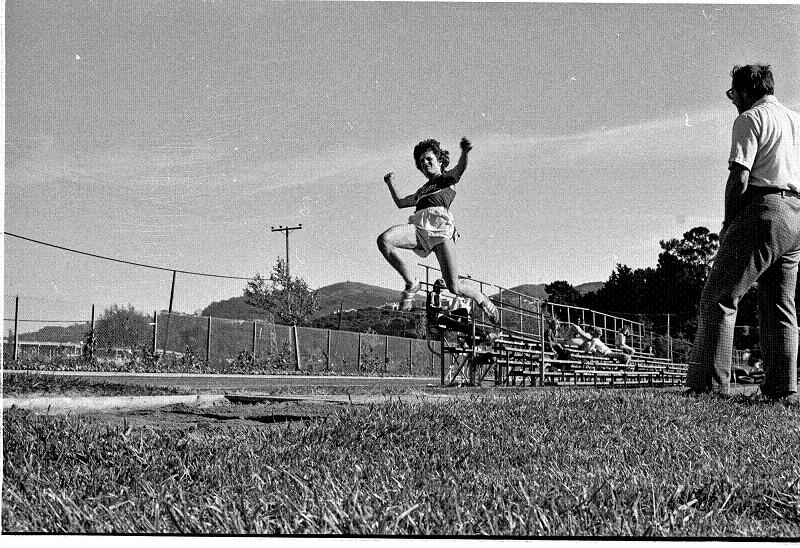 Back in San Francisco we attended the Giants-Padres season opener with a contingent of folks from the Highlands, including family matriarch Cynthia Williams and the writer Ray Mungo. At the stadium we were greeted by striking umpires walking a picket line informing fans of their issues and grievances. Fortunately the striking umps did not ask us to honor the picket line, something the people in our group would not have been inclined to do.

Once I was home again in Chicago, we began to bring Heartland Café to events around town.

Once I was home again in Chicago, we began to bring Heartland Café to events around town. A big venture/adventure was selling our cornbread and chili at the city’s annual food and entertainment extravaganza, ChicagoFest, on Navy Pier. Our first experience of preparing food for thousands over just a few days was a monumental challenge. Katy’s family and many of our friends stepped up to help us through. We grossed a big chunk of money, netted zero, had fun, and learned a lot, and word of the Café spread further out through Chicagoland. 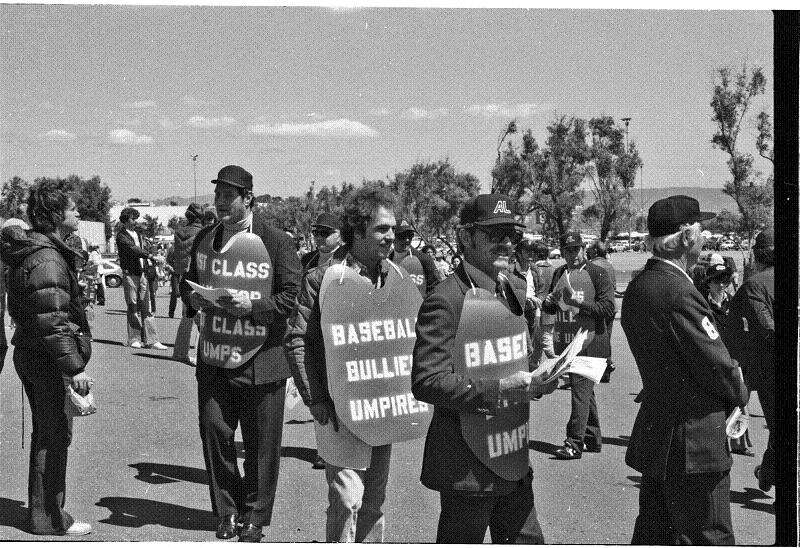 Umps Out and on Strike, Giants-Padres opening day, San Francisco, 1979. 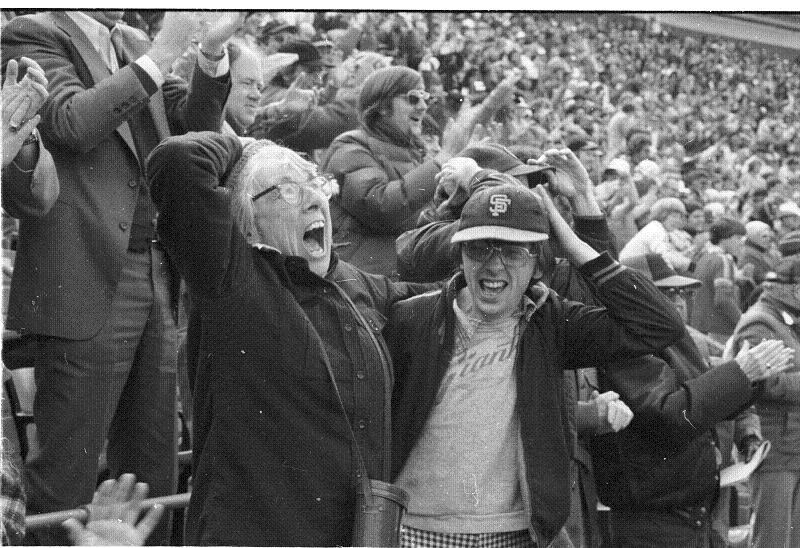 I recall that at ’79 Fest large numbers of inebriated white kids were yelling “Coho, Coho!” — a song from Chicago DJ Steve Dahl and his band Teenage Radiation. It’s called “Coho Lip Blues,” the theme song to his anti-disco fan base, The Insane Coho Lips, the B-side to his single, “Do You Think I’m Disco.” To me this came across as an inherently racist action, which elicited the hostility of young working-class white kids toward a genre of music listened to mostly by Blacks and Latinos.

The Heartland road shows also included “off-campus events” like street fests and athletic events. In addition, I tried to sell goods from the Heartland General Store at the historic open-air market on Maxwell Street. I first visited the Maxwell Street Market in 1966, like many thousands before me making the early-morning journey to Maxwell Street and the stores nearby on Halsted south of Roosevelt. 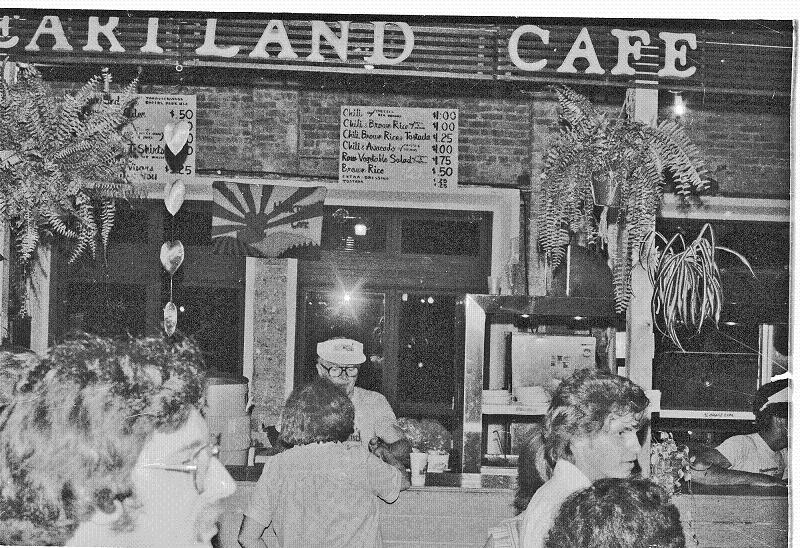 Serving the People at Chicagofest, Chicago, 1979.

I loved the street musicians who played there, like Blind Jim Brewer — whom, with the help of the great guitarist Mike Bloomfield, I had brought to Lake Forest College in 1963. Jim and his wife Fanny performed spirituals and blues tunes. Jim also played at the No Exit Café, a beatnik coffeehouse near the Heartland that brought in the likes of Steve Goodman, Tom Dundee, and many other fine folk, blues, and jazz musicians. Years later the No Exit became part of the Heartland Café’s growing enterprise when in 1999 Katy Hogan and I bought it from Brian and Sue Kozin.

The Maxwell Street scene was an amazing urban wonder.

The Maxwell Street scene was an amazing urban wonder. During the Rising Up Angry years my greaser friends and I shopped for Italian knits and bell-bottoms. Some of the neighborhood kids seeking an exaggerated “pimp” look also bought big hats a la Shaft. When we were preparing to open the Heartland I found things like chairs, tables, kitchen equipment, cast iron pots, rolls of thick clear plastic to cover tables, and decorative items for our new adventure, all at Maxwell Street. 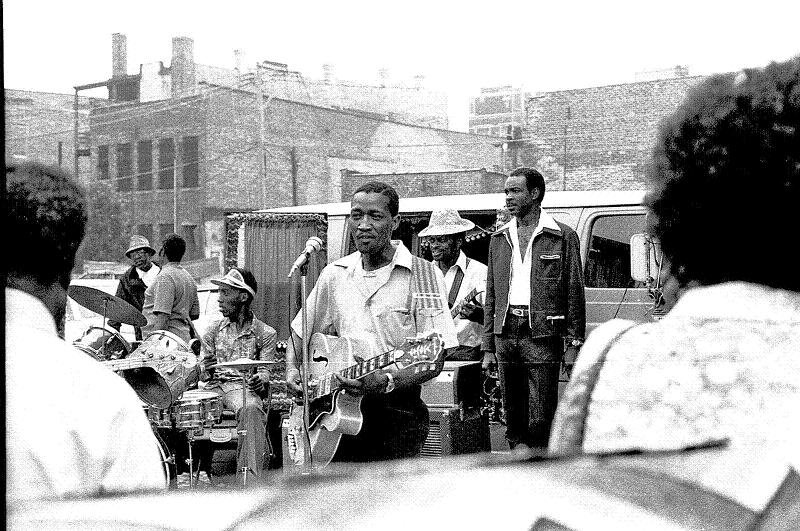 One Sunday I loaded my Chevy pickup with items from the Heartland General Store and headed to Maxwell Street to set up a dazzling display of unique goods. Included were jars of Some Honey, jugs of apple cider, bottled juices, packaged miso, corncob pipes, radical books and magazines, and decks of R. Crumb’s Blues, Jazz, and Country Music Cards. I found a spot and set out my wares. Literally moments later the “Market Boss” cop arrived, commanding me to disband the set up. He told me to “get a peddler’s license,” which I did. After going to City Hall to pay fees and getting my picture taken, I left with a license that gave me permission to sell my wares.

Halsted by Maxwell had a great hot dog stand, which I frequented during late night hunger attacks for polish sausages smothered with grilled onions and hot peppers and greasy fries on the side. Next door stood Taqueria Mexico, one of my favorite restaurants. My first wife Stormy and I had a late night meal there after our wedding party, and I once pulled a torturous prank on my son David there when I surreptitiously doused one of his peanuts in jalapeño juice. The restaurant also served great Mexican hot chocolate. 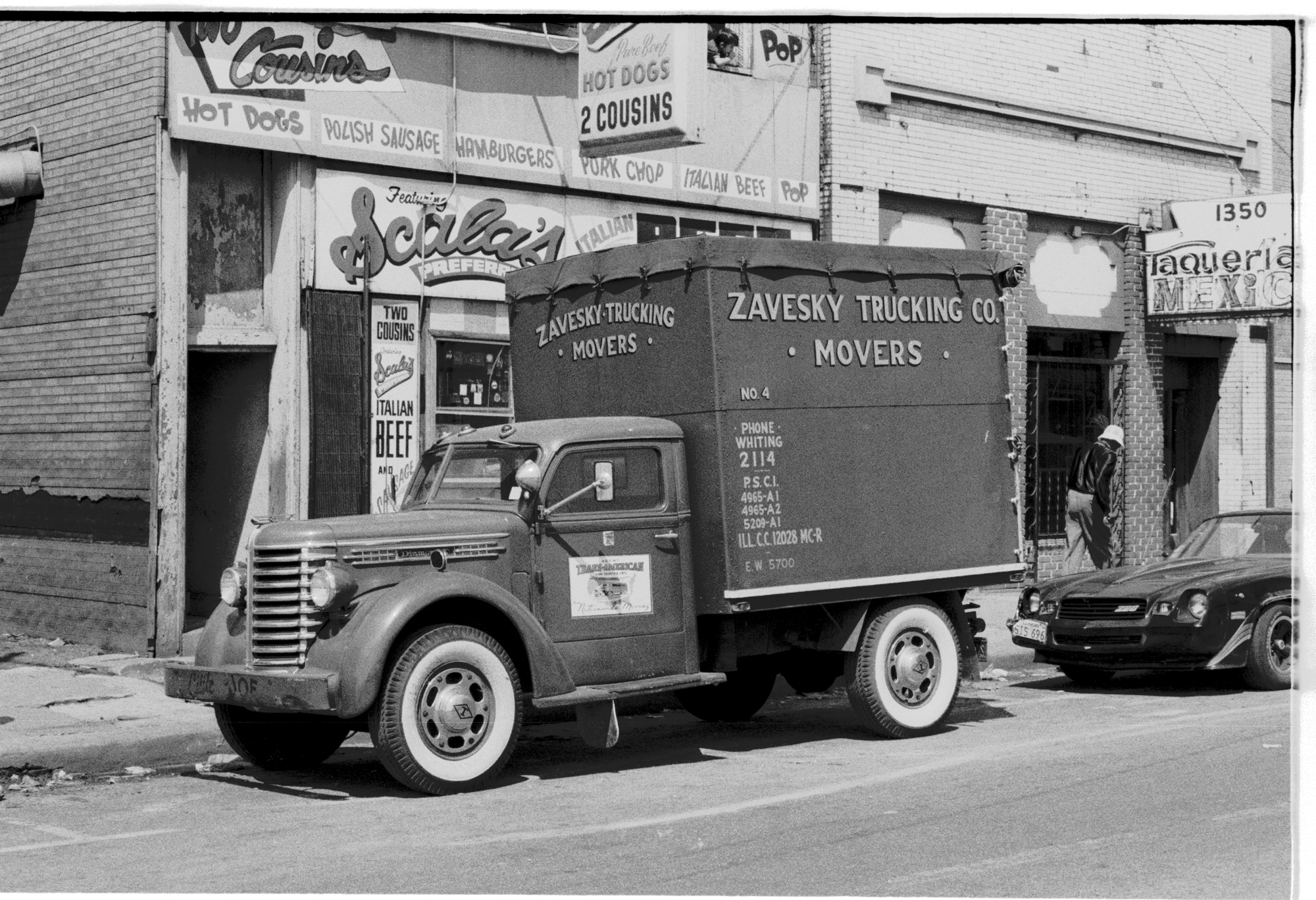 Truck and Hot Dog Stand and Taqueria Mexico — side by side, Halsted Street, Chicago, 1981.

The Maxwell Street Market scene was wonderful, a true multicultural treasure. Chicago lost this special, irreplaceable part of its culture when the younger Mayor Daley okayed the wrecking ball and leveled it for the University of Illinois at Chicago’s expansion.

Speaking of Daley, I never voted for one, always very critical of the family’s politics and many of their policies.

Speaking of Daley, I never voted for one, always very critical of the family’s politics and many of their policies. In 1979 I started actively engaging in electoral politics and worked against Daley and the regular Democratic Party machine. As a young community organizer with a leftist bent, I had become disillusioned with the electoral process. But when my Heartland Café partner Katy Hogan jumped into the campaign of her former Mundelein professor, David Orr — by then our customer, neighbor, and friend — when he ran for Alderman of the 49th Ward, I got involved. 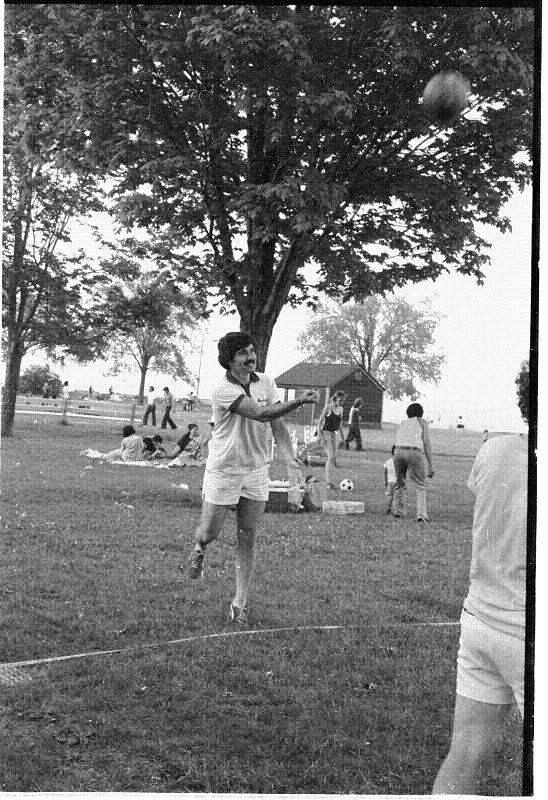 David went up against the local Democratic Party machine, an outfit increasingly out of touch with residents of our ward and despite the dirty tricks and malicious activities on the part of “the regulars,” he took the February race and upon taking office began challenging Old Man Daley. My appetite for local races and electoral battles had begun. I found that I liked the locally-based activity, the registering of voters, talking with people about candidates and issues, helping encourage turnout, and fighting the backward opposition.

David Orr would emerge as Chicago’s progressive standard-bearer and served as mayor after the great Harold Washington died. A struggle for succession followed; the Old Machine pushed African-American Eugene Sawyer, then dumped him two years later for Richard M. Daley, Richard J. Daley’s son, who became entrenched as Chicago’s mayor for too many years. David Orr went on to become the biggest vote getter in Cook County, where over 40% of Illinois residents reside, when he ran for Cook County Clerk, an office he continues to occupy.

1979, already a full year, was also when I returned to the world of publishing. I started what was eventually called The Heartland Journal, a “Free American Journal of Health, Sport, Culture and Change.”