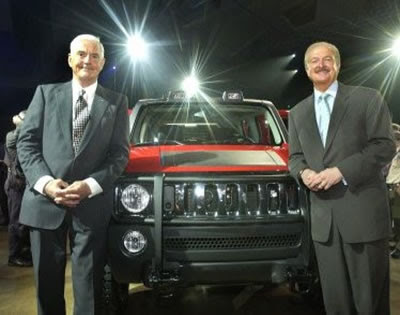 It is with sad irony that the company which invented ‘planned obsolescence’ — the decision to build cars that would fall apart after a few years so that the customer would then have to buy a new one — has now made itself obsolete.

I write this on the morning of the end of the once-mighty General Motors. By high noon, the President of the United States will have made it official: General Motors, as we know it, has been totaled.

As I sit here in GM’s birthplace, Flint, Michigan, I am surrounded by friends and family who are filled with anxiety about what will happen to them and to the town. Forty percent of the homes and businesses in the city have been abandoned. Imagine what it would be like if you lived in a city where almost every other house is empty. What would be your state of mind?

It is with sad irony that the company which invented “planned obsolescence” — the decision to build cars that would fall apart after a few years so that the customer would then have to buy a new one — has now made itself obsolete. It refused to build automobiles that the public wanted, cars that got great gas mileage, were as safe as they could be, and were exceedingly comfortable to drive. Oh — and that wouldn’t start falling apart after two years.

GM stubbornly fought environmental and safety regulations. Its executives arrogantly ignored the “inferior” Japanese and German cars, cars which would become the gold standard for automobile buyers. And it was hell-bent on punishing its unionized workforce, lopping off thousands of workers for no good reason other than to “improve” the short-term bottom line of the corporation.

Beginning in the 1980s, when GM was posting record profits, it moved countless jobs to Mexico and elsewhere, thus destroying the lives of tens of thousands of hard-working Americans. The glaring stupidity of this policy was that, when they eliminated the income of so many middle class families, who did they think was going to be able to afford to buy their cars? History will record this blunder in the same way it now writes about the French building the Maginot Line or how the Romans cluelessly poisoned their own water system with lethal lead in its pipes.

So here we are at the deathbed of General Motors. The company’s body not yet cold, and I find myself filled with — dare I say it — joy. It is not the joy of revenge against a corporation that ruined my hometown and brought misery, divorce, alcoholism, homelessness, physical and mental debilitation, and drug addiction to the people I grew up with. Nor do I, obviously, claim any joy in knowing that 21,000 more GM workers will be told that they, too, are without a job.

But you and I and the rest of America now own a car company! I know, I know — who on earth wants to run a car company? Who among us wants $50 billion of our tax dollars thrown down the rat hole of still trying to save GM? Let’s be clear about this: The only way to save GM is to kill GM. Saving our precious industrial infrastructure, though, is another matter and must be a top priority.

If we allow the shutting down and tearing down of our auto plants, we will sorely wish we still had them when we realize that those factories could have built the alternative energy systems we now desperately need. And when we realize that the best way to transport ourselves is on light rail and bullet trains and cleaner buses, how will we do this if we’ve allowed our industrial capacity and its skilled workforce to disappear?

Thus, as GM is “reorganized” by the federal government and the bankruptcy court, here is the plan I am asking President Obama to implement for the good of the workers, the GM communities, and the nation as a whole. Twenty years ago when I made “Roger & Me,” I tried to warn people about what was ahead for General Motors. Had the power structure and the punditocracy listened, maybe much of this could have been avoided. Based on my track record, I request an honest and sincere consideration of the following suggestions:

1. Just as President Roosevelt did after the attack on Pearl Harbor, the President must tell the nation that we are at war and we must immediately convert our auto factories to factories that build mass transit vehicles and alternative energy devices. Within months in Flint in 1942, GM halted all car production and immediately used the assembly lines to build planes, tanks and machine guns. The conversion took no time at all. Everyone pitched in. The fascists were defeated.

We are now in a different kind of war — a war that we have conducted against the ecosystem and has been conducted by our very own corporate leaders. This current war has two fronts. One is headquartered in Detroit. The products built in the factories of GM, Ford and Chrysler are some of the greatest weapons of mass destruction responsible for global warming and the melting of our polar icecaps. The things we call “cars” may have been fun to drive, but they are like a million daggers into the heart of Mother Nature. To continue to build them would only lead to the ruin of our species and much of the planet.

The other front in this war is being waged by the oil companies against you and me. They are committed to fleecing us whenever they can, and they have been reckless stewards of the finite amount of oil that is located under the surface of the earth. They know they are sucking it bone dry. And like the lumber tycoons of the early 20th century who didn’t give a damn about future generations as they tore down every forest they could get their hands on, these oil barons are not telling the public what they know to be true — that there are only a few more decades of useable oil on this planet. And as the end days of oil approach us, get ready for some very desperate people willing to kill and be killed just to get their hands on a gallon can of gasoline.

President Obama, now that he has taken control of GM, needs to convert the factories to new and needed uses immediately.

2. Don’t put another $30 billion into the coffers of GM to build cars. Instead, use that money to keep the current workforce — and most of those who have been laid off — employed so that they can build the new modes of 21st century transportation. Let them start the conversion work now.

3. Announce that we will have bullet trains criss-crossing this country in the next five years. Japan is celebrating the 45th anniversary of its first bullet train this year. Now they have dozens of them. Average speed: 165 mph. Average time a train is late: under 30 seconds. They have had these high speed trains for nearly five decades — and we don’t even have one! The fact that the technology already exists for us to go from New York to L.A. in 17 hours by train, and that we haven’t used it, is criminal. Let’s hire the unemployed to build the new high speed lines all over the country. Chicago to Detroit in less than two hours. Miami to DC in under 7 hours. Denver to Dallas in five and a half. This can be done and done now.

4. Initiate a program to put light rail mass transit lines in all our large and medium-sized cities. Build those trains in the GM factories. And hire local people everywhere to install and run this system.

5. For people in rural areas not served by the train lines, have the GM plants produce energy efficient clean buses.

6. For the time being, have some factories build hybrid or all-electric cars (and batteries). It will take a few years for people to get used to the new ways to transport ourselves, so if we’re going to have automobiles, let’s have kinder, gentler ones. We can be building these next month (do not believe anyone who tells you it will take years to retool the factories — that simply isn’t true).

7. Transform some of the empty GM factories to facilities that build windmills, solar panels and other means of alternate forms of energy. We need tens of millions of solar panels right now. And there is an eager and skilled workforce who can build them.

9. To help pay for this, impose a two-dollar tax on every gallon of gasoline. This will get people to switch to more energy saving cars or to use the new rail lines and rail cars the former autoworkers have built for them.

Well, that’s a start. Please, please, please don’t save GM so that a smaller version of it will simply do nothing more than build Chevys or Cadillacs. This is not a long-term solution. Don’t throw bad money into a company whose tailpipe is malfunctioning, causing a strange odor to fill the car.

100 years ago this year, the founders of General Motors convinced the world to give up their horses and saddles and buggy whips to try a new form of transportation. Now it is time for us to say goodbye to the internal combustion engine. It seemed to serve us well for so long. We enjoyed the car hops at the A&W. We made out in the front — and the back — seat. We watched movies on large outdoor screens, went to the races at NASCAR tracks across the country, and saw the Pacific Ocean for the first time through the window down Hwy. 1. And now it’s over. It’s a new day and a new century. The President — and the UAW — must seize this moment and create a big batch of lemonade from this very sour and sad lemon.

Yesterday, the last surviving person from the Titanic disaster passed away. She escaped certain death that night and went on to live another 97 years.

So can we survive our own Titanic in all the Flint Michigans of this country. 60% of GM is ours. I think we can do a better job.