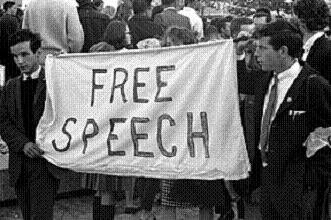 BERKELEY — Michael Rossman, one of the leaders of the Free Speech Movement at UC Berkeley, died last week after a short battle with leukemia. He was 68.

Rossman died at his Berkeley home surrounded by family and friends, said his wife, Karen McLellan.

Rossman was at Sproul Plaza on the UC Berkeley campus on the afternoon of Oct. 2, 1964, when 3,000 students sat around a police patrol car and kept it from taking student protester Jack Weinberg to jail.

One by one, people took off their shoes and hopped onto the top of the police car to speak, and in essence the Free Speech Movement was born.

During a time when student protests were unprecedented, Rossman and students Mario Savio, Hal Draper, Brian Turner, Steve Weissman, Art Goldberg, Bettina Aptheker, Jackie Goldberg and others insisted that the UC administration lift a ban on campus political activities, academic freedom and free speech. It was a student protest that lasted about three months during the 1964-65 school years.

But for Rossman it was something that consumed most of his life. He wrote essays, news stories and books about it. He was the president and chief executive officer of the Free Speech Movement Archives and took very seriously the way information was presented on the group’s Web site, said Lee Felsenstein, secretary-treasurer of the archive.

“Michael, I would have to call him a renaissance man because he embodied both art and science and activism. He was a poet and had that sort of sensibility, which could be hard to bear when you were reading one of his long writings. Nevertheless, he had a way with metaphors that was a very important part of him,” Felsenstein said.

Rossman came to Berkeley in 1958 and earned a degree from Cal in mathematics in 1963.

He spent more than 30 years teaching science in elementary schools, including Ecole Bilingue, a French-American School In Berkeley. He was also the founder of Camp Chrysalis, a science and environmental education camp in its 26th year.

“He had the most marvelous and open curiosity and he could answer a kid’s question in just about every direction because he knew so much,” McLellan said. “He wanted children to just explore and he wrote these amazing essays on science education.”

Rossman was many things — a man of integrity, great humor and brilliance, his widow said. But most of all, he was a teacher. “Just about whereever he was he was a teacher. He just couldn’t help himself,” she said.

He was also a collector.

For years, he had been compiling an archive of political posters from the 1960s and ’70s in his Berkeley home. “It’s far larger than the one at the Smithsonian,” said McLellan, adding that there could be close to 100,000 posters.

He also spent more than 40 years writing about the Free Speech Movement, including the books “The Wedding Within the War,” a chronicle of the movement in the ’60s, and “New Age Blues,” partly about cults.

He also headed the 20th, 30th and 40th anniversary commemorations of the Free Speech Movement.

“He was a very important part of the movement and especially the kind of experimentation that went on afterward. The Free Speech Movement was basically a political struggle, and yet in my view was really a revolution because it overturned a social order and it opened large possibilities for students,” Felsenstein said.

Rossman was diagnosed with leukemia in June 2007 and quickly went to writing a blog to keep his friends and family informed. Even in writing about his illness, his words were frank and honest. “Misfortune has found me, abruptly,” he wrote July 22, 2007.

In the next eight months — through hospital stays, thousands of dollars spent on medical costs, a bone marrow transplant, chemotherapy, a relapse and a lot of blood transfusions, his blog shows how he struggled, but also used humor to cope with a disease that would ultimately kill him.

This week, McLellan, with whom he has two grown sons, posted a blog entry alerting friends that Rossman had died at 2:30 p.m. May 12. “No flowers, thank you,” she wrote. “My yard is in splendid bloom.”

Thanks to Tom Burgess / MDS / The Rag Blog

This entry was posted in RagBlog and tagged History, People, SDS, Sixties, The Left. Bookmark the permalink.

2 Responses to Michael Rossman, Berkeley Activist from 60s, Dies at 68