Mike Davis :
Reflections on the election

Even the Cato Institute believes that the election was Clinton’s loss, not Trump’s win. 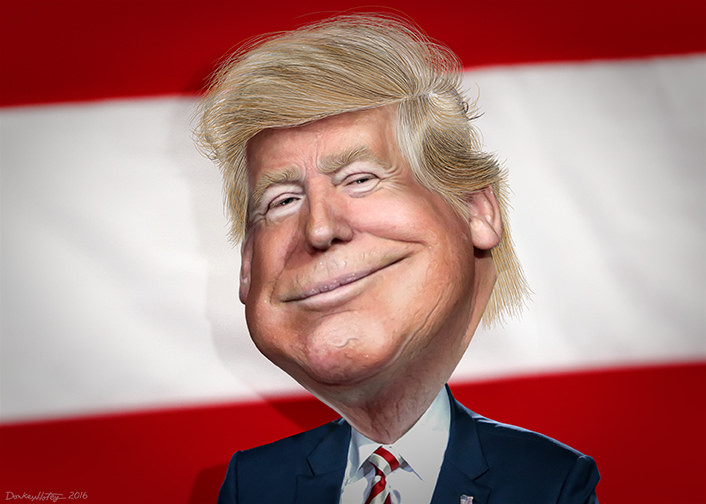 We should resist the temptation to over-interpret Trump’s election as an American Eighteenth Brumaire or 1933. Progressives who think they’ve woken up in another country should calm down, take a stiff draught, and reflect on the actual election results from the swing states.

National returns, of course are not yet complete, with millions of California votes remaining to be counted, the pre-election polls were flawed if not worthless, and authoritative statistics on the composition of the turnout must await the Current Population Survey’s reports over the next year or two. Nonetheless the Pew and Edison exit polls (the latter is the supplier of data to the AP and The New York Times) combine a more trustworthy array of survey techniques than the earlier polls and usually yield productive insights.

There were no Trump landslides in key states.

1. With the exceptions of Iowa and Ohio, there were no Trump landslides in key states. He merely did as well as Romney, making up smaller votes in the suburbs with larger votes in rural areas to achieve the same overall result. His combined margin of victory in Wisconsin, Michigan, and Pennsylvania combined was razor thin, about 107,000 votes.

2. The great surprise of the election was not a huge white working stiff shift to Trump but rather his success in retaining the loyalty of Romney voters, and indeed even slightly improving on the latter’s performance among evangelicals for whom the election was viewed as a last stand. Thus economic populism and nativism potently combined with but did not displace the traditional social conservative agenda

The key factor was Trump’s cynical covenant with religious conservatives.

3. The key factor was Trump’s cynical covenant with religious conservatives following the defeat of Cruz. He gave them a free hand to draft the party platform at the Convention and then married one of their popular heroes, Pence of Indiana, a nominal Catholic who attends an evangelical megachurch. At stake, of course, was control of the Supreme Court and a final chance to reverse Roe v. Wade. This may explain why Clinton, who unlike Obama allowed herself to be identified with late-term abortions, underperformed him by eight points among Latina/o Catholics.

4. The defection of white working-class Obama voters to Trump was a decisive factor mainly in a lakeshore rim of industrial counties in Ohio and Pennsylvania — Ashtabula, Lorain, Erie, and so on — which are experiencing a new wave of job flight to Mexico and the U.S. South. This region is the epicenter of the revolt against globalization.

The pro-Republican blue-collar realignment in presidential politics was already the status quo.

In other depressed areas — the coal counties of southeastern Ohio, the former anthracite belt of eastern Pennsylvania, the Kanawha Valley of West Virginia, the piedmont textile and furniture towns of the Carolinas, Appalachia in general — the pro-Republican blue-collar realignment in presidential politics (but not necessarily in local or state politics) was already the status quo. The mass media has tended to conflate these older and newer strata of “lost Democrats”; thus magnifying Trump’s achievement.

5. I’ve been unable to find reliable data about the turnout of non-college whites in key states or nationally. According to the dominant narrative, Trump simultaneously mobilized non-voters and converted Democrats, but the variables are independent and their weights are unclear in states like Wisconsin or Virginia (which Clinton narrowly held) where other factors like Black turnout and the size of the gender gap were likely more important.

6. A crucial cohort of college-educated white Republican women appeared to have rallied to Trump in the last week of the campaign after having wavered in previous polling. This has been attributed by several commentators, including Clinton herself, to Comey’s surprise intervention and renewed skepticism about her honesty. Disgust at Trump, moreover, was counterbalanced by disgust at Bill Clinton, Anthony Weiner, and Patrick Murphy. As a result, Clinton made only modest gains, sometimes none at all, in the crucial red suburbs of Milwaukee, Philadelphia, and so on.

A fifth of Trump voters reported an unfavorable attitude toward him.

7. A fifth of Trump voters — that is to say, approximately 12 million voters — reported an unfavorable attitude toward him. No wonder the polls got it so wrong. “There is no precedent,” wrote The Washington Post, “for a candidate winning the Presidency with fewer voters viewing him favorable, or looking forward to his administration, than the loser.”

It will be interesting to see if a disaggregation of this nose-holding segment of the Trump vote is possible.

8. Even the Cato Institute seems to believe that the election must be interpreted as Clinton’s loss, not Trump’s win. She failed to come close to Obama’s 2012 performance in key Midwestern and Florida counties. Despite his strenuous last-minute efforts, the president could not transfer his popularity (now higher than Reagan’s in 1988) to his old opponent. Ditto for Sanders.

Although the findings are controversial and perhaps misinterpreted by David Atkins in The American Prospect, the Edison/New York Times exit polls indicate that Trump, relative to Romney, achieved only the slightest improvement among whites, perhaps just one percent, but “bested him by 7 points among Blacks, 8 points among Latinos and 11 points among Asian Americans.”

In Wisconsin Jill Stein’s vote was larger than Trump’s margin of victory.

9. Whether or not that was actually the case, the lower Black turnout in Milwaukee, Detroit, and Philadelphia alone would explain most of Clinton’s defeat in the Midwest, as would alternately in Wisconsin — where Jill Stein’s vote was larger than Trump’s margin of victory — the lack of enthusiasm among millennials. In South Florida a massive effort improved the Democratic vote but that was offset by reduced turnout (largely Black voters) in the Tallahassee, Gainesville, and Tampa areas.

There is also evidence that discriminatory voter ID requirements — the jewel in crown of Scott Walker’s counterrevolution — significantly reduced the vote in low-income precincts of Milwaukee.

The failure to make a major commitment to Texas Democrats has long been an open scandal.

11. Since the 2004 insurgency of Howard Dean, progressive Democrats have fought uphill against party regulars for a full 50-state strategy that invests in base building in otherwise gerrymandered red congressional districts. The failure of the DNC, for example, to make a major commitment to Texas Democrats — a state that is now majority minority — has long been an open scandal.

The Clinton campaign, flush with funds but obviously short on brains, compounded a disastrous strategy. For example, she failed to visit Wisconsin after the Convention despite warnings that Scott Walker’s fired-up followers were fully enlisted behind Trump. Likewise she disdained Agriculture Secretary Tom Vilsack’s advice that she set up a “rural council” such as had served Obama so well in his Midwestern primary and presidential campaigns. In 2012, for example, he managed to add 46 percent of small town vote to his urban majority in Michigan and 41 percent in Wisconsin. Her desultory results were 38 percent and 34 percent, respectively.

12. Ironically, Trump may have been advantaged by his poor backing from the Kochs and other conservative mega-donors, who switched priorities to invest in saving Republican congressional majorities. In the event Comey’s letter to Congress was the equivalent of $500 million worth of anti-Clinton ads while down-ticket Republicans received an unexpected financial lifeline.

Trump’s campaign pushed all the buttons associated with the white-nationalist alt-right.

13. My emphasis on the contingent and fragile character of the Trump coalition, however, needs to be accompanied by a warning about the toxic contents of his politics. As I’ve argued in another note, Trump is less a loose canon and opportunist than usually portrayed. His campaign systematically pushed all the buttons associated with the white-nationalist alt-right whose godfather is Pat Buchanan and would-be Goebbels is Stephen Bannon.

Trump, President Obama consoles us, is “non-ideological.” Ok, but Buchanan-Bannon have buckets of ideology and it’s called fascism. (For those who think this is an exaggeration and that fascism is passe, please go to Buchanan’s site and go to the list of his most popular columns. One blames Poland for the start of World War Two and another basically claims that Blacks should pay reparations to whites.)

David Axelrod claims it has taken only a week for the Republicans to fully ‘capture’ Trump.

14. David Axelrod claims that it has taken only a week for the Republicans to fully “capture” Trump. Perhaps. Certainly Trump will attempt to honor his commitment to the Christians and give them the Supreme Court — a goal that Mitch McConnell may facilitate with the “nuclear option” in the Senate. Likewise Peabody, Arch, and the other coal companies will get new permits to destroy the earth, immigrants will be sacrificed to the lions, and Pennsylvania will be blessed with a right-to-work law. And, of course, tax cuts.

But on social security, medicare, deficit spending on infrastructure, tariffs, technology, and so on, it’s almost impossible to imagine a perfect marriage between Trump and the institutional Republicans that doesn’t orphan his working-class supporters.

15. It would not be difficult to imagine a scenario where the alt-right ultimately splits with or is expelled from the administration and quickly moves to consolidate a third political force around the expanded base it has won thanks to Trump’s demagoguery. Or, perhaps, that Trump’s incendiary and contradictory policies plunge the country into a new depression and Silicon Valley rushes to resuscitate the Democratic Party.

But whatever the hypothesis, it must take account of the real revolution in American politics, the Sanders campaign. The downward economy mobility of graduates, especially from working class and immigrant backgrounds, is the major emergent social reality, not the plight of the Rust Belt. I say this while recognizing the momentum given to economic nationalism by the loss of five million industrial jobs over the last decade, more than half of them in the South.

But Trumpism, however it evolves, cannot unify millennial economic distress with that of older white workers, while Sanders showed that heartland discontent can be brought under the umbrella of “democratic socialism” that reignites New Deal hopes for fundamental economic rights. With the Democratic establishment in temporary disarray, the real opportunity for transformational political change (“critical realignment” in a now archaic vocabulary) belongs to Sanders and Warren.

Also on The Rag Blog: “Mike Davis: The undead. Is Trump an improvised, rough-at-the-edges avatar of the Nixon coalition? Ask Pat Buchanan.“

[Mike Davis is a Distinguished Professor in the Department of Creative Writing at the University of California, Riverside, and an editor of the New Left Review. An urban theorist, historian, and social activist, Davis is the author of City of Quartz: Excavating the Future in Los Angeles, Planet of Slums, and In Praise of Barbarians: Essays against Empire.]

1 Response to Mike Davis :
Reflections on the election