Mike Klonsky : Let’s Not Get All ‘Warm and Fuzzy’ About Teddy Roosevelt 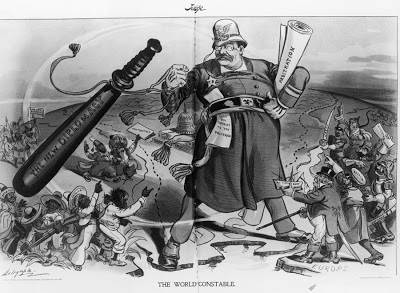 Let’s remember that Teddy Roosevelt, eulogized in President Obama’s Osawatomie speech on “New Nationalism” last week, was at his best a tame economic reformer and at his worst, a racist, imperialist warmonger. Publicly, Roosevelt spoke out against racism and discrimination at times, but also believed in Social Darwinism, the philosophical rock bed of white supremacy.

Here are a few of TR’s thoughts on race and politics that Obama failed to mention:

In 1894, he wrote an article entitled “National Life and Character” in which he said that, “negroid peoples, the so-called “hamitic,” and bastard semitic, races of eastern middle Africa were “not fit” to compete with whites and it would take “many thousands years” before the Black became even “as intellectual as the [ancient] Athenian.”

According to linguist and historian Noam Chomsky, “Theodore Roosevelt was a shocking racist. I don’t use the analogy lightly, but it’s a fact that you have to go to the Nazi archive to find anything similar.”

The expansion of the peoples of white, or European, blood during the past four centuries which should never be lost sight of, especially by those who denounce such expansion on moral grounds. On the whole, the movement has been fraught with lasting benefit to most of the peoples already dwelling in the lands over which the expansion took place.

With regard to the conquest of a half of Mexico, Roosevelt explained:

…it was inevitable, and in the highest degree desirable for the good of humanity at large, that the American people should ultimately crowd out the Mexicans from their sparsely populated northern provinces.

And then, in a line that would do Texas’ Gov. Rick Perry and most of the Republican candidates proud, TR wrote, “It was out of the question to expect Texans to submit to the mastery of the weaker race.”

So I’m sorry, Pres. Obama. But I’m just not ready to embrace Roosevelt’s “New Nationalism” quite yet. I hope you aren’t either.

[Mike Klonsky, an educator, writer, and school reform activist who lives in Chicago, was active with SDS in the Sixties. Mike blogs at SmallTalk, where this article also appears.]

4 Responses to Mike Klonsky : Let’s Not Get All ‘Warm and Fuzzy’ About Teddy Roosevelt