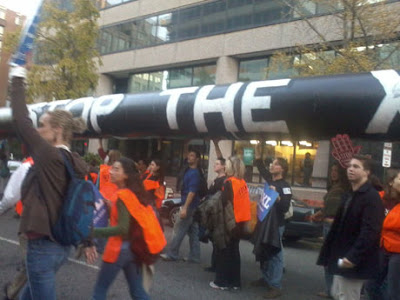 Young protesters marched through the streets of Washington, DC, carrying an inflatable “pipeline” as long as a city block. Photo by Mike Ludwig / Truthout.
The pressure is on:
Thousands encircle White House,
tell Obama to reject Keystone pipeline

UPDATE: The U.S. government on Thursday delayed approval of a Canada-to-Texas oil pipeline until after the 2012 U.S. election, bowing to pressure from environmentalists and sparing President Barack Obama a damaging split with liberal voters he may need to win reelection. — Reuters, November 10, 2011

WASHINGTON, DC — Thousands of people from across the United States and Canada completely encircled the White House grounds on Sunday in a show of collective strength that sent a clear message to President Obama: say no to the proposed Keystone XL pipeline that would pump oil from Canada to the Gulf Coast.

Activists of all ages descended on the White House, including more than 1,000 young people.

After surrounding the White House, a youth-led breakout march snaked through downtown Washington, DC, carrying the momentum of the Occupy movement along with an inflatable black pipeline replica as long as a city block.

At one point, the protesters filled the plaza outside the American Petroleum Institute office and chanted, “we are the 99 percent.” The protesters ceremoniously deflated their “pipeline” at the nearby Occupy DC encampment.

The march blocked traffic and drew police, but the protest remained peaceful. No arrests were made in stark contrast to the two-week sit-in at the White House in August where 1,253 anti-pipeline activists were arrested.

The president was playing golf in Virginia during most of the action, but protesters said he should not ignore the sheer numbers of protesters that showed up at his doorstep. Environmentalists and young voters propelled Obama into the White House, and the Keystone XL pipeline is quickly becoming the issue that could unite or divide the president’s voter base during the next year.

Oil giant TransCanada proposed the $7 billion dollar, 1,700-mile pipeline, which would pump 830,000 barrels of tar sands oil a day across 14 U.S. states to refineries in Oklahoma and Texas. The Obama administration is facing a year-end deadline to make a final decision on the pipeline, but a State Department official told reporters last week that the decision may slip past the deadline if the administration needs more time to review the department’s final report.

In an interview with a Nebraskan television station last week, Obama suggested that he would make the final decision.

“We’re really seeing this as a symbolic issue for [Obama] in the next year, and if he makes the right decision on this I think it will invigorate a whole generation of people who were starting to waver on their commitment to him,” said Maura Cowley, a youth organizer and the co-director of Energy Action Coalition.

Nikki Luke, a sophomore college student who traveled from Pittsburgh for the protest, said Obama stands to lose much of the support his 2008 campaign enjoyed from student volunteers if he sides with big oil and approves the pipeline.

“I was an intern for Obama in 2008 in Virginia, and I know that I and many of the other people in my office worked for him for environmental reasons, and we will have no reason to do so again in 2012 if he’s not going to show us why we voted for him in the first place,” Luke said.

The proposed pipeline has given environmentalists of all stripes a reason to take to the streets. Conservationists say extracting oil from the tar sands is a destructive, chemical-heavy process that threatens Canada’s boreal forests and native communities. Climate activists want the Obama administration to focus on alterative energy instead of a massive oil infrastructure project. Others say an influx of tar sands oil, which is dirtier than oil from conventional wells, will jeopardize the health of Americans living in the shadow of oil refineries.

There have been 14 reported oil spills along the existing Keystone pipeline system, and opponents say a major spill on the transcontinental line could poison farmland and the Ogallala aquifer.

Rep. Steve Cohen (D-Tennessee) told protesters that the Keystone XL pipeline is out of the hands of Congress and the decision rests “squarely on the president’s shoulders.”

Bruce Boettcher, a rancher from Nebraska, spoke on behalf of the ranchers and landowners who have become red-state allies of the environmentalists opposing the pipeline. Ranchers are facing the threat of losing land to eminent domain and worry that a potential spill could poison farmland and the Ogallala aquifer, a massive underground source of fresh water for millions living in America’s central plains.

“Eminent domain or otherwise, we will stand firm and strong upon the sandy soil of the Nebraska sand hills and the Ogallala aquifer to protect it,” Boettcher said. “We the American people do not need to sacrifice our land and water for TransCanada’s bottom line.”

Legislators in Nebraska have introduced five bills that would help the state regulated pipeline activities, including one bill that would give a panel and the governor authority over eminent domain claims.

Obama is not only under pressure from protesters and environmental groups. A Canadian official has warned that, if the Obama administration refuses to approve the pipeline, Canada will ramp up efforts to sell its oil to other countries, possibly in Asia, according to Reuters.

TransCanada and supporters of the project say it will decrease America’s dependence on oil from unfriendly countries and create thousands of jobs.

With unemployment at the top of the national agenda, some observers expect the Keystone XL controversy to pit two key factions of Obama’s voter base, labor unions and environmentalists, against each other.

A Cornell Global Labor Institute report released in September, however, shows that only $3 billion to $4 billion of the $7 billion that would be spent on the project will be spent in the U.S., and TransCanada’s claim that the project would create 20,000 jobs is “unsubstantiated.” The report also found that most jobs would be temporary and go to non-local and out-of-state workers.

[Mike Ludwig is a reporter for Truthout, where this article first appeared.]