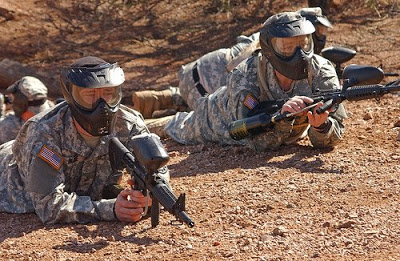 We should not send troops to the U.S.-Mexico border, despite the drug-related violence on the Mexican side.

President Obama, Homeland Security Secretary Janet Napolitano and a variety of other government officials have discussed the possibility of sending the National Guard. Texas Gov. Rick Perry has requested 1,000 troops on his southern border.

To be sure, violence has risen dramatically across the border in the past year and a half. There have been almost 2,000 murders since the beginning of last year in Ciudad Juarez in Mexico, across from my hometown of El Paso in Texas.

I hear stories from friends and acquaintances almost daily of the robberies, kidnappings, carjackings and shootouts.

The local university has undertaken a study of women in Juarez who are experiencing post-traumatic stress syndrome as a result of living in the chaos of ever-increasing violence.

While once a frequent visitor to Juarez, I haven’t crossed the border in months. I grew up on the Texas-Mexico border, but I have never seen this level of violence on the Mexican side.

But do I want troops sent to the border in the name of protecting me?

For more than twenty years, those of us who live on the border have witnessed the increasing militarization of the border. The border wall is a daily reminder of this, as are the helicopters that fly over our neighborhoods, the checkpoints manned by the Border Patrol and local law enforcement, as well as the daily harassment of citizens who happen to have darker skin. We are frequently the target of various “wars” —against undocumented migration, against terrorism and now against drugs. I am tired of living in a war zone.

The model of “war” has not worked, and it will not work.

Too often the war against drugs or terrorism or undocumented immigration turns into violence against innocent civilians.

Too often it turns into human rights abuse.

Too often it becomes a justification for even more violence.

What is the price that those of us living on the U.S. side will be asked to pay because of the possibility that the violence will “spill over” the border?

For a change, look at what is spilling over from the United States into Mexico — illegal arms and ammunition from U.S. dealers, laundered drug money and an increasing demand for drugs.

Instead of further funding a military solution that will not work, let’s fund more drug rehabilitation, enforce existing gun laws, and take responsibility for our part in creating the violence.

I look forward to crossing over the border once again in safety.

But that won’t be possible until we stop militarizing this problem and start addressing it at its roots.

[Yolanda Chávez Leyva is a historian specializing in Mexican-American and border history. She lives in Texas. She can be reached at pmproj@progressive.org.]

This entry was posted in RagBlog and tagged Immigration, Police State, War on Drugs. Bookmark the permalink.