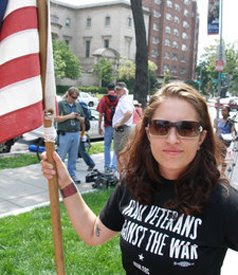 Sgt. Jennifer Hogg speaks out against sexual harassment and assault in the military. She calls attention to the importance of the upcoming election for military women. Photo by Jackie Scalone.
‘For the military this election has heavy stakes’
By Jennifer Hogg

For women in the military, this election season has the potential either to focus a spotlight on long-neglected needs or to continue rendering us invisible. Due to our military training, we often struggle to exercise our right to speak out, but now we need systemic and systematic change both to do justice to service members and to create healthier communities for everyone.

I was still in high school in 2000 when I joined up, looking for a fuller life than I saw available to me in blue-collar Buffalo, New York. But would I have ever joined the military if higher education was not so hard to fund? Would the young, the poor, the single mothers feel their only option was to enlist if adequate housing, jobs and healthcare were available?

These are fundamental social inequalities that funnel people into the military. We hope to escape the injustice of racism, sexism and homophobia by proving ourselves—being able to say, “I served. I earned my place here.” And service does earn us praise, but only as long as we don’t rock that boat.

For the military, this election has heavy stakes, with two occupations taking place simultaneously, Iraq and Afghanistan, and a third waiting in the wings. Such high stakes tend to push aside other issues, and we risk being forced into silence for fear that the boat may capsize. But if it’s that close to going under, isn’t it time for a better boat?

Female veterans know this feeling all too well. All service members are taught to never question your own or your mission. For women service members this silence can have particularly dangerous consequences. When I began basic training, I never expected the culture of fear that service women take pride in living through. From a young woman ready to stand for what was right, I was being turned into a person who shrugged off injustice. When I helped another female recruit report a physical assault, I saw her become the target of widespread verbal harassment. The lesson? Bearing indignity silently in private is far better than risking public ridicule from those who choose to make you a target.

Imagine if those flashy recruiting commercials showed the real dangers a woman can face while serving in the military, living her formative years in a hazardous work environment where racism and homophobia are tolerated for the sake of “getting by” and sexual harassment goes unreported so you don’t “ruin his career.” All this while women work twice as hard to prove themselves as soldiers—more than just a “bitch,” “dyke,” “whore.”

I recently read a news story that highlighted service women who spoke of working twice as hard as the men in order to be seen as equal. That only made them appreciate the military, they said. These stories make me cringe because I remember very keenly boasting about unnecessary hardship—we thought it made us tough. But now such pride seems more like a coping method, one that allows negligent and sometimes criminal behavior to go unpunished. It pits women against one another, with those who are sexually assaulted seen as weak—as if strength alone and not luck allows one to avoid rape or assault.

Buried within this news story was an unfortunate example, a soldier named Spc. Kamisha Block reported dead in Iraq of a “non-combat related injury.” This injury turned out to be gunshot wounds inflicted by a male soldier who had a record of three previous assaults against her. It is obvious Spc. Block was not silent, yet her reports only resulted in her harasser being moved five minutes away from her in Iraq, allowing him the access to murder her before turning the gun on himself. When political candidates this season talk of foreign aggressors, they miss the largest threat military women face. By May of 2004 there were already 112 reports of sexual assault and rape in Iraq and Afghanistan. New Department of Defense policies make reporting easier, but what does it matter if complaints fall on deaf ears?

Sadly these are only secondary concerns in politics, at the VA and the Pentagon, or even in the antiwar movement—if they are issues at all. The current occupation of Iraq has left 97 women dead, the most so far of any American military intervention. Forty percent (39) of those are attributed to non-combat related injuries. Still uncounted in these numbers are suicides and murders that happen in the United States or on military bases post deployment. Spc. Block was reported to have died of friendly fire, so it is hard to extrapolate how many such deaths were actually murders. We need to know more about Pfc. Tina Priest, whose apparent suicide followed a rape allegation that was dropped after her death, and about Pfc. Lavena Johnson, who was brutally beaten, set on fire, doused with acid and somehow ruled a suicide. Their families are still trying to find answers.

One begins to understand why some women in Iraq—marked as targets by both their uniform and their womanhood—carry weapons for protection against fellow service members. We need to make these stories public, so that female service members find communities to amplify their voices when they speak out against these injustices. The Pentagon must be convinced that cover-ups will be uncovered with due haste. We need to ask other women, those who may feel like just one unworthy case, if they have stories to tell.

And we must look at the way post-traumatic stress disorder (PTSD) affects men if we really want to address the role of women in the military both as service members and partners of male soldiers. It’s easy to vilify men who turn on women with violence to escape their own powerlessness. Yet once again we don’t have a flashy military recruitment video that shows the real effects of war, seeing your friends blown up, being forced to kill. A whole generation of young service men is becoming emotionally shut off—for fear of seeming “weak” if they show signs of cracking under the enormous pressure of bloody combat.

The PTSD women experience in association with military sexual assault (MSA) must also be treated seriously. The title itself, post-traumatic stress disorder, suggests an abnormal reaction to combat or sexual assault. We continue to reinforce the idea that one is a broken person when experiencing PTSD—something wrong with the individual rather than with what happened to them. Women also lose out because current combat PTSD care is often geared towards men since women are officially barred from the combat zone, as though the military could sustain the occupation without women playing combat roles. If a woman is experiencing both combat and MST-related PTSD, she may be directed to male-filled PTSD groups or MST groups with no combat support. She has nowhere within the VA to find the care she needs.

If we are going to create any meaningful change for service women, it will require that as a country we begin to truthfully recognize our military. As it stands, the occupation of Iraq has become more of a far away sound bite than a tangible situation that real people face every day. Our media must do its job. Senator Barack Obama’s upcoming trip to Iraq, rather than becoming a media circus, could afford a valuable glimpse into the reality of the occupation for our female service members. Listen to their first hand accounts. It’s a real opportunity to highlight the dangers they face.

This is no time to relegate these concerns to the status of “women’s issues” in election campaigns. When any candidate is questioned on the gaps in VA health care, they cannot be allowed a free pass to render MST and female service members invisible. The candidates vying for commander in chief must be held accountable by the media for a full understanding of that job in the 21st Century when women in the military are a reality.

Women veterans and service members are bravely bringing these issues to light, breaking the codes of silence. Their acts of courage mean there is no longer an excuse for inaction at any level of our media or government. I have found a voice in SWAN, the Service Women’s Action Network, which allows me to share my story and help other women share theirs. The healing and subsequent strength gained from this regained visibility needs to happen for our country as well. Too often I am asked if my military battle dress is a boyfriend’s, as if it were not possible that the uniform was once my work clothing. Instead of asking such questions, it’s time to listen.

[With this commentary by SWAN activist Jennifer Hogg, WMC Media Track 2008 continues a series of dispatches on perspectives of issues that the press and the candidates must address in order to win women voters this November. The series began with economist Heidi Hartmann’s commentary, “Shaky Economic Times are Shakier for Women]

4 Responses to Military Women Ready to Rock the Boat