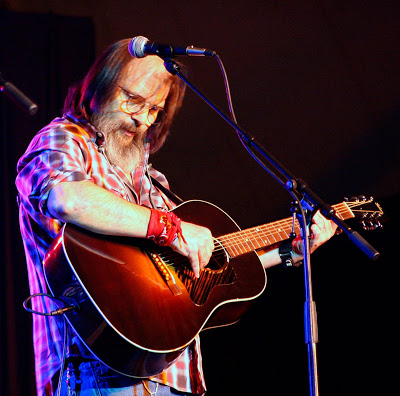 Texas-reared singer-songwriter Steve Earle will be rocking the Republicans on Labor Day. Image copyright Charles Devlin.
‘Most of the rock concerts during RNC convention week are renegade events aimed at countering the Republican mania, not fueling it’
by Keith Goetzman / August 11, 2008

What do the Republican National Convention and rock and roll have in common? Very little, which is why most of the rock concerts in Minneapolis and St. Paul during RNC convention week are renegade events aimed at countering the Republican mania, not fueling it.

On August 31, the day before the convention, a large roster of local bands plus smartypants New York singer-songwriter Nellie McKay will play at ProVention, “a concert for people, peace, and the planet” at O’Gara’s, a stalwart St. Paul rock club. (Utne Reader will be involved as a sponsor.)

On Labor Day, which is RNC kickoff day, a host of national acts with working-class sympathies will rock the Take Back Labor Day Festival at Harriet Island Regional Park, just across the river from the convention site. On the docket of this concert sponsored by the SEIU (Service Employees International Union) are Steve Earle, Billy Bragg, Lupe Fiasco, Mos Def, Atmosphere, Alison Moorer, and Tom Morello, a.k.a. the political hell raiser known as the Nightwatchman.

Finally, on September 3, the eve of the convention’s close, Morello and his briefly reunited Rage Against the Machine bandmates will bring their potent rap-rock to the Target Center in St. Paul’s sister city of Minneapolis. You might recall that Rage broke up shortly after an incendiary gig during the 2000 Democratic National Convention in Los Angeles.

Altogether, this show of musical force seems to reinforce the idea that apart from Ted Nugent, the Republican Party doesn’t have many rock and rollers on its side. Minnesota Governor Tim Pawlenty, who’s been getting a lot of buzz as a potential McCain running mate, was famously flummoxed before the 2004 election to learn that his favorite rock artist, Bruce Springsteen, harbored liberal tendencies. As the governor may have figured out by now, it’s not just the Boss who’s blue.