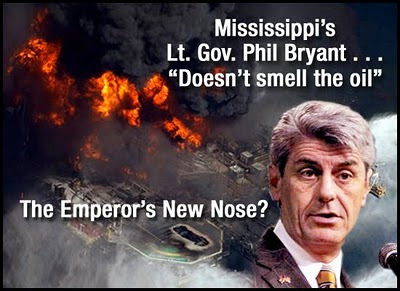 Graphic by Larry Ray / The Rag Blog.
Mississippi Politics:
Getting stinkier by the minute

GULFPORT, Mississippi — Growing up in Texas I was sure politics couldn’t get any stinkier, any dumber, or any more corrupt than ours. Then later in life I moved to Mississippi and soon saw that Texas politics pales in all categories of underachievement and good-old-boy domination when compared to the Magnolia State.

But Mississippi politics is generally endured much like mosquitoes, stifling summer heat, and down here on the Gulf Coast, hurricanes. Katrina wiped most of the edge of the state off the map in 2005. We had just gotten the place more or less back in shape and looking very good again, then April 20th, 2010, 25 days ago, a British Petroleum offshore oil well in 5,000 feet of water suffered a “worst case scenario.” And by now it looks like it is even worse than that.

After a lethal fire, explosion, and sinking of a leased drilling rig that killed 11 workers, oil began gushing into the Gulf of Mexico uncontrollably from a mile below. For almost a month now, millions of gallons of crude oil continue to escape, out of control. The entire world has been following news reports on British Petroleum’s failed attempts to stop the flow and to deal with a catastrophe that worsens daily.

Winds and currents have kept the spill off Mississippi shores so far, but the petroleum odor from hundreds of square miles of floating oil some 40 miles offshore has been noticeable here in communities all along the coast.

About a week and a half ago the moment I stepped outside with the dogs to take a morning walk a heavy, oily, almost diesel-like smell filled the air. A steady south wind was blowing. As we got to the park, folks were stopping to ask one another if they “could smell that.” We all could.

And the vagaries of wind and air currents have brought the petroleum smell back several more times. Folks have been calling city officials and health departments. There have been several mentions of the oily smell up and down the coast by local news media. Folks with severe asthma were told to check with the doctor if it really got bad. But it was not a really big deal.

Then day before yesterday one of our esteemed politicos, Lt. Governor Phil Bryant, had his photo on the front page of the morning paper with the headline, “Bryant Doesn’t Smell The Oil.” The Sun Herald’s article reported that, “Lt. Gov. Phil Bryant’s response to people in South Mississippi who’ve said they can smell oil from the Deepwater Horizon spill in the Gulf is, ‘No, you can’t.’

“Speaking at Wednesday’s Coastal Development Strategies Conference, Bryant said the smell may be coming from their lawn mowers. ‘That is not gasoline coming out of the Gulf,’ he said.”

Bryant, who back slapped his way to hosting the National Association of Lieutenant Governors in July in Biloxi went on about the BP disaster noting it is “not the Exxon Valdez.” Phil was as oily and about as crude as his odorless oil out there declaring there is nothing to worry about, “Y’all come on down here, you hear!”

Bryant’s imperial pronouncement that no one was smelling anything except lawnmower fumes followed the blithe May 1 pronouncement from Mississippi U.S. Rep. Gene Taylor, after a quick fly-over of the gathering spill that, “It’s not as bad as I thought. It’s breaking up naturally; that’s a good thing. The fact that it’s a long way from the Mississippi Gulf Coast, that’s a great thing, because it gives it time to break up naturally.”

Taylor, a supposed Democrat, whose voting record would make Senator Mitch McConnell proud, was already fast becoming very unpopular for his dullness and increasingly regular trips to the all you can eat lobbyist campaign contribution buffet. His remarks exhibiting no real concern for the potential offshore threat elicited an outraged reaction from folks up and down the coast. Taylor’s political future seems to breaking up naturally as well.

It is completely understandable that area chambers of commerce, businesses, and our tourism and seafood industries want to get out the word that our beaches are still clean, seafood is fresh, and that we are open for business. We might well dodge the worst of the damage along with Alabama and Florida. But selling that idea as the oil spill grows, heaves and moves at the whim of sea currents and surface winds is tough to pull off.

Having political buffoons telling the world that folks here aren’t smelling anything but lawnmower fumes, and that the oil is “breaking up naturally” only serves to rob any planned promotional campaign of any credibility it may have.

And I haven’t even mentioned our Governor, Haley Barbour, who made the national news recently after he declared, dewlaps swinging, “When you’re a fat redneck like me and got an accent like mine you can say, ‘well they’re gonna hold me to a higher standard.'”

Higher than what, Governor? The next high tide?