Posted on September 7, 2014 by Thorne Dreyer 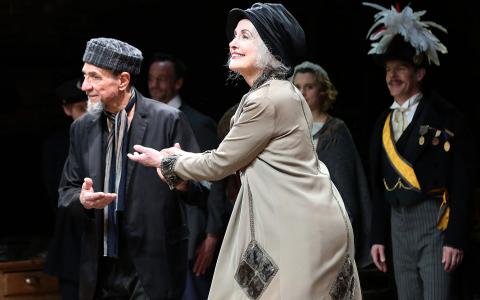 The playwright, theorist and poet Bertolt Brecht is known worldwide as a giant of modern theater. But until recently, few theaters — especially in the U.S. — have been staging his plays. Production companies haven’t seen much of a market for the Marxist playwright’s overtly political style and have generally stuck with more familiar, accessible works.

That’s starting to change. Since last year, Brecht suddenly seems to be everywhere. In New York alone, we’ve seen productions of The Good Person of Szechuan (originally translated as The Good Woman of Szechuan), A Man’s a Man, and The Threepenny Opera, which has also been performed in Long Beach, California, Washington, D.C., and Yorkshire, England.

A production of The Good Person of Szechuan, helmed by renowned Chinese director Meng Jinghui, just finished a run in Australia; another just wrapped in New Zealand. Galileo is running in Santa Monica, California. Other Brecht plays have recently been staged in London and Dublin, and Mother Courage and Her Children — Brecht’s meditation on war and war profiteering — has recently been performed in Paris, London, Ontario and, reportedly, Iran.

Two Brecht biographies have also been published this year — the first in English in two decades — along with a volume of love poems and letters translated for the first time. Brecht is also penetrating the hipster-intellectual scene; he’s recently been the topic of a TED talk and a video featuring actress Tilda Swinton.

It’s not hard to see why Brecht is back, especially in the U.S. His main subjects were inequality, squalor, exploitation, and the malleability of human nature. Since his death in 1956, the capitalism he critiqued has only become more sophisticated, entrenched, and global. With inequality at a post-Depression high in the U.S., poverty inescapable for many, power concentrated in the hands of a few, and the promise of social mobility all but lost, 2014 America bears many parallels to the interwar Germany that Brecht once called home.

The 2008 financial crisis and its aftermath opened the door to ideas that previously seemed outdated or too radical. For the first time in generations, Americans were shaken into doubting the capitalist system, which seemingly served the country well for so long. After the mortgage bubble burst, 401(k)s and household wealth were eviscerated, taxpayers bailed out megabanks, and the economy began to hemorrhage 8.7 million jobs, many Americans understandably lost faith.

Such shattering of America’s collective illusion about the safety, soundness, and fairness of its capitalist system sparked an ongoing dialogue about who wins and who loses if we maintain the status quo. The 2011 Occupy Wall Street movement, which tapped into such disillusionment, may have fizzled, but its ideas live on.

We have entered an era of widespread skepticism of systems and practices that we are told are good for us.

We have entered an era of widespread skepticism of systems and practices that we are told are good for us — budget cuts and austerity, the expansion of the tech industry and all its disruptions, antiterrorism efforts (including mass surveillance), and a once again rising stock market. More Americans are losing confidence in our economic system and in the political leaders who uphold and preserve it. 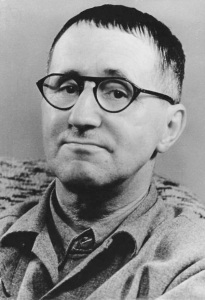 Cue Brecht’s re-entry onto the theater scene. Born in Bavaria in 1898, Brecht became a Marxist in his late 20s. He was forced into exile by the Nazis in 1933 and for 15 years lived as a man without a country. He worked in Hollywood for two years until he was interrogated about his alleged communist sympathies by the House Committee on Un-American Activities (HUAC) in 1947. Shortly after that, he moved to East Germany.

Wherever he was, Brecht’s mission was to — through theater — lay bare the contradictions inherent in capitalism and the brutality and human exploitation within both capitalist and fascist systems. He wanted to activate audiences, to spur them not to suspend their disbelief by becoming absorbed in the plot and identifying with characters’ emotional journeys but to think critically about what they viewed onstage. He wanted audience members to engage with the play and, by extension, their daily lives under capitalism. Active participants would replace passive consumers.

Brecht called this approach “epic theater.” His plays broke with the conventions of realism to highlight their constructed nature. The hope was that audiences would understand that, like what was happening onstage, life outside the theater was also constructed — and was, as such, changeable.

Epic theater’s central concept, Verfremdungseffekt (in English, the estrangement or alienation effect), would drive these revelations. It’s the opposite of Hollywood’s approach, which draws audiences in and coaxes them to identify with protagonists. Brecht wrote that, by contrast, the estrangement effect is about “stripping [an] event of its self-evident, familiar, obvious quality and creating a sense of astonishment and curiosity about [it].”

He developed a series of techniques aimed at forestalling realism: having actors address the audience directly, creating works bereft of sympathetic characters, interrupting the action with song and dance and using projections, recordings, placards, unnatural lighting, and commentary delivered through loudspeakers.

‘Art is not a mirror to reflect the world but a hammer with which to shape it.’ — Bertolt Brecht

The astonishment and curiosity that the estrangement effect produced would allow theatergoers to see that if what was happening on the stage wasn’t inevitable, nor was suffering and exploitation in daily life. Epic theater and its tactics would work to wake up the audience — ultimately to take action and change society. “Art is not a mirror to reflect the world,” Brecht wrote, “but a hammer with which to shape it.”

One of Brecht’s most famous works, The Threepenny Opera, embodies epic theater’s mission. The play’s portrayal of the Weimar Republic’s bourgeoisie reveals a decadent society on the brink of collapse, and capitalism’s perversions are a central theme.

Set in Victorian London, Brecht’s play centers on Macheath (“Mack the Knife”), a notorious, violent gangster who aspires to middle-class respectability. He marries Polly Peachum, daughter of Jonathan Jeremiah Peachum, an underworld boss who exploits and controls the beggars of London, who give him a percentage of donations they collect on the streets. Macheath ultimately escapes imprisonment when, in an absurd development that parodies Hollywood endings, he is pardoned by Queen Victoria and made a baron.

Brecht’s estrangement effect and implicit indictment of capitalism are evident throughout Threepenny. Unlike the classic hero, Macheath doesn’t change over the course of the play; he remains a criminal consumed by self-interest. Even when, facing death, he sings a ballad decrying the evils of big corporations and banks — “What is robbing a bank compared to founding one?” he asks the audience — he is not to be trusted as an earnest truth teller. He is simply the vehicle for Brecht’s message. The audience therefore hears the message about capitalist exploitation but does not sympathize with the antihero uttering it or with any other character in the play, for that matter.

Brecht is implicitly satirizing the middle classes — respectable on the surface but rotten underneath.

In it Macheath emerges as a metaphor for capitalism and bankrupt bourgeois values. He has the traditional markings of a hero: He has a strong physique and is charismatic. But beneath the genteel and polished surface (he is well dressed and always wears expensive white kid gloves), he is a thief and murderer. Brecht is implicitly satirizing the middle classes — respectable on the surface but rotten underneath.

The relevance of Threepenny to the world we live in is not lost on the directors who have staged it in the last year. Matthew Gardiner, director of the Washington production, told The Washington Post that its relevance is “obvious,” citing Occupy and the vast income gap in the U.S., which “continues to grow.” Jenny Sealey, director of the Yorkshire production, which was set in 2014 and toured four major U.K. theater venues, spoke of the connection between the play’s themes and the austerity policies of the British government.

“The play is hugely relevant, as government cuts mean people are living in desperate times, using food banks and struggling in whatever way they can for survival,” she told The Yorkshire Post, adding that cast members, who are part of a disabled theater company called Graeae, are being affected by cuts and are campaigning to stop them — a classic Brechtian example of activism beyond the theater doors.

If Brecht was clear in diagnosing capitalism’s ills, he was (like Marx) less explicit about what human emancipation could ultimately look like. So while Threepenny plainly shows how the system debases people, a vision of what would dignify them and create a better world is absent. But in later works, such as The Good Person of Szechuan, Brecht more strongly implies that human liberation is freedom from material suffering and exploitation.

Brecht sees exploitation in classic Marxian terms — the expropriation of surplus value from the worker or the system’s failure to allow workers to enjoy the fruits of their labor. With so many workers seeing less and less of these fruits, it is no wonder his work has a renewed relevance today.

This article was first published at Al Jazeera America and was reprinted with permission from Portside by The Rag Blog.

[Moira Herbst is a strategist for BerlinRosen, a New York–based progressive communications firm, and a contributor to The Guardian. She has worked as a journalist for BusinessWeek, Bloomberg News, and Reuters.]