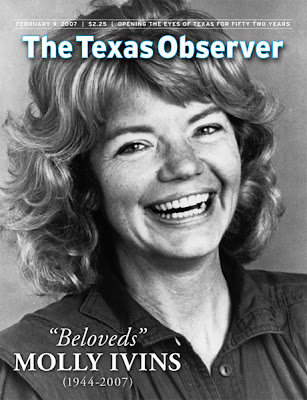 AUSTIN — The personal library of legendary Texas journalist Molly Ivins has been opened to the public at Texas State University in San Marcos.

The collection of more than 3,560 books was donated to the Southwestern Writers Collection at Texas State by her brother, Andrew Ivins.

The library showcases a portion of books Ivins read that influenced her throughout her journalism career. Also showcased were some of Ivins’ personal notations and commentary, including inscriptions by authors and friends who admired the outspoken, tough-on-politicians-yet-satirical writer.

Ivins was raised in Houston and worked at the Houston Chronicle, Minneapolis Tribune, The New York Times, two Dallas newspapers and the Texas Observer, where she became the editor.
In her later years, Ivins became a nationally syndicated political columnist known for her passionate liberal beliefs, Texas flare and wit. She authored many books of her own, such as “Molly Ivins Can’t Say That Can She?”

The photographs at the exhibit show the endless amount of books that filled her shelves and proved Ivins was a voracious reader. Catalog librarian Karen Sigler said five or six people from the library helped to pack up the books, which took more than 80 boxes to fill.

“I was surprised when I did the initial inventory to find so many inscriptions and so many letters laid down from different authors, publishers and friends that she kept,” Sigler said. “She kept everything.”

Mysteries, biographies, historical fiction, a Bible and a cookbook are just a sample of the books on display. Sigler said the exhibit has been divided by genre headings, so visitors could get a feel of what Ivins was interested in reading.

“She liked mysteries — she had over a 1,000 mysteries in her personal library,” Sigler said.

Sigler said because there were so many inscriptions, workers had a hard time trying to decide what should be put in the exhibit. Selected inscriptions include messages from authors and friends Jim Hightower, John Henry Faulk, Nancy Reagan and Maya Angelou.

Faulk’s inscription in his book read: “For a woman I love and who has always influenced me for the better. Molly Ivins, who done knows how much I love her.”

Angelou’s inscription read: “Dear Twin, Molly Ivins you are the only precious, practical, political pundit and my heart sings because of that!”

Sigler said the pens in the books at the exhibit were used by Ivins when writing her notations and are laid out exactly how they were found.

“She had a way with her words, and that’s why I think people liked her so much,” Sigler said. “By really making a point, whether it was political and calling politicians and some of their behavior, their policies out. But she did it with humor, there was a lot of humor in her private collection too. She had a way of injecting the humor and making the people realize.”

Sigler said after July 7 a bibliography will be started, and assistant curator Steve Davis will decide where the collection will be housed. The books with inscriptions and notations will either be part of the Southwestern Writer’s Collection or the Wittliff Collections, depending on their genre heading.

“We will preserve the ones that are part of the Southwestern Writer’s Collection, and the rest of the books will be incorporated into the main library stacks,” said Michele Miller, media relations and publications specialist for the Wittliff Collections.

Students will be able to read the books that Ivins read, and they will all be listed in the online catalog.

“I hope this will get people interested in reading some of her work, some of her columns, and to go back and take a look,” Sigler said. “Because that’s what I did, I started reading it and getting a better feel for Molly as a person. I miss her just like everybody else.”

The exhibition is located on the first floor of the Alkek Library on the Texas State campus.

It is open to the public until July 7.

Source. / KXAN
Thanks to David Hamilton / The Rag Blog

And go to:
Molly Ivins tribute by By Anthony Zurcher.
In Loving Memory of Molly Ivins, The Texas Observer.

This entry was posted in RagBlog and tagged Austin, Dissent, Journalism, Texas, Women. Bookmark the permalink.