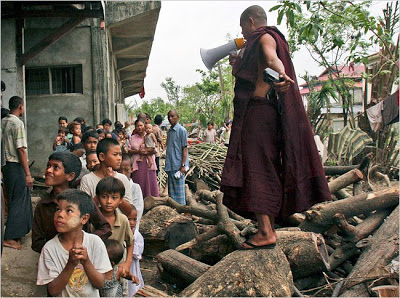 A monk organized relief donations this week for people left homeless by the cyclone. This monastery, outside of Yangon, has become a temporary shelter. Photo by AP.
In desperate times, Burmese turn to their monks

KUN WAN, Myanmar / May 30, 2008 — It is a scene Myanmar’s ruling generals are unlikely to see played out for themselves: As a convoy of trucks carrying relief supplies, led by Buddhist monks, passed through storm-devastated villages, hungry children and homeless mothers bowed in supplication and respect.

Since the cyclone, the Burmese have become even closer to the monks while their alienation from the junta grows.

“When I see those people, I want to cry,” said Sitagu Sayadaw, 71, one of Myanmar’s most respected senior monks.

At his makeshift clinic in this village near Bogalay, an Irrawaddy Delta town 120 kilometers, or 75 miles, southwest of Yangon, hundreds of villagers left destitute by Cyclone Nargis arrive each day seeking the assistance they have not received from the junta or international aid workers.

They paddle for hours on the stormy river, or carry their sick parents on their backs through the mud and rain – all traveling from kilometers around to reach the one source of help they know they can always depend on: Buddhist monks.

The May 3 cyclone left more than 134,000 dead or missing and 2.4 million survivors grappling with hunger and homelessness. Recently, people who had taken shelter at monasteries or gathered on roadsides waiting for aid to arrive were being displaced again, this time by the junta, which wants them to stop being an embarrassment to the government and return to their villages “for reconstruction.” UN officials said Friday that refugees were also being evicted from government-run camps.

But they have little left of their homes and find themselves almost as exposed to the elements there as their mud-coated water buffaloes. Meanwhile, outside aid is slow to arrive, with foreign aid agencies gaining only incremental access to the hard-hit Irrawaddy Delta and the government impounding cars of some private Burmese donors.

“In my entire life, I have never seen a hospital. I don’t know where the government office is. I can’t buy anything in the market because I lost everything to the cyclone,” said Thi Dar. “So I came to the monk.”

With tears welling in her eyes, the 45-year-old woman pressed her hands together in respect before the first monk she saw at Sitagu’s clinic and told her story. The other eight members of her family were killed in the cyclone. She now felt suicidal but no longer had anyone to talk with. The other day, word reached her village that a monk had opened a clinic 10 kilometers upriver. So on Thursday, she got up early and caught the first boat going upstream.

Nay Lin, 36, a volunteer doctor at the Kun Wan clinic, one of the six emergency clinic shelters Sitagu has opened in the delta, said: “Our patients suffer from infected wounds, abdominal pains and vomiting. They also need counseling for mental trauma, anxiety and depression.”

Since the cyclone, the Burmese have become even closer to the monks while their alienation from the junta grows. This bodes ill for the government, which brutally cracked down on thousands of monks when they took to the streets last September appealing to the generals to improve conditions for the people.

Village after storm-hit village, it is clear who has won people’s hearts.

Some monks died with people in the storm. Now, others console the survivors while sharing their muddy squalor.

While the government has been criticized for obstructing the relief effort, the Buddhist monastery, the traditional center of moral authority in most villages here, proved to be the one institution people could rely on for help.

Monasteries in the delta – those still standing after the storm – were clogged with refugees. People went there with donations or as volunteers. Monasteries that served as religious centers, orphanages and homes for the elderly were now also shelters for the homeless.

“The monks’ role is more important than ever,” said Ar Sein Na, 46, a monk in the delta village of That Kyar. “In a time of immense suffering like this, people have nowhere to go except to monks.”

Kyi Than, 38, said she had traveled 25 kilometers by boat to Sitagu’s camp.

“Our village monk died during the storm. I felt so good today having my first chance to talk to a monk since the storm. Monks are like parents to us,” she said. “The government wants us to shut up, but monks listen to us.”

Faced with the country’s deadliest natural disaster in recent memory, senior monks have organized their own relief campaigns.

Every day, their convoys head down delta roads. A leading figure in these efforts is Sitagu, whose name invariably draws words of reverence or a thumbs-up sign here.

Trucks of rice, beans, onions, clothes, tarpaulins and cooking utensils, donated from all over Myanmar, pulled into Sitagu’s International Buddhist Missionary Center in Yangon from early morning on. Each day, shortly after dawn, a convoy of trucks or a barge on the Yangon River departs for the delta, loaded with relief supplies and volunteers.

Among villagers here, Sitagu appeared to command as much authority as the pope among Roman Catholics. As he sat on a wooden bench in his field headquarters, people lined up to pay their respects. Villagers came to present lists of their most urgent needs. Monks from outlying villages came asking for help to repair their temples. Rich families from towns knelt before him and donated bundles of cash.

However, like other senior monks here he must strike a careful balance. He has the moral duty to speak out on behalf of his suffering people but he must also protect his social programs and hospitals, which provide free medical care to the destitute in a country whose government views such private undertakings as a reproof.

But, speaking at his shelter as an afternoon monsoon rain drummed against the roof, Sitagu sounded frustrated with the government.

“In my country, I cannot see a real political leader. General Than Shwe’s ‘Burmese way to democracy?”‘ he said, referring to the junta’s top leader. “What is it?”

Among monks interviewed in the delta and Yangon, there was no sign of imminent organized protests.

Still, a 40-year-old monk at Sitagu’s camp said that “monks are very angry” about the government’s recent move to evict refugees from monasteries, roadside huts and other temporary shelters, even while the state-run media are filled with stories of government relief efforts. “The government doesn’t want to show the truth.”

A young monk in the Chaukhtatgyi Paya monastery district in Yangon predicted trouble ahead. “You will see it again because everyone is angry and everyone is jobless,” said the monk, who said he joined the September “saffron revolution” and had a large gash over his right eye from a soldier’s beating to show for it.

A monk from Mon State in southern Myanmar, who was visiting the delta to assess the damage and arrange an aid shipment, said: “For the government, these people are no more than dead animals in the fields.”

The simmering confrontation between the two pillars of Myanmar life today – the military and the Buddhist clergy – was evident at the village level after the cyclone.

Shortly after the storm, a monk in Myo Thit, a village 30 kilometers from Yangon, walked around with a loudspeaker inviting victims to his monastery and asking people to donate. The monk had to stop, villagers said, after a township leader affiliated with the government threatened to confiscate the loudspeaker.

The interdependence between monks and lay people is age-old. Monks receive alms – food, medicine, clothes, cash to buy books – from the laity. In return, they offer spiritual comfort. In villages without government schools, a monastic education is often the only one available for children.

“There is a relationship of reciprocity between monks and the lay people,” said Desmond Chou, a Burmese-born scholar of comparative religion in New Delhi. “If a fire breaks out in a Myanmar village, it is usually the monks, not firefighters, who arrive first to rescue the people.”

This entry was posted in RagBlog and tagged Buddhism, Environment, Myanmar. Bookmark the permalink.