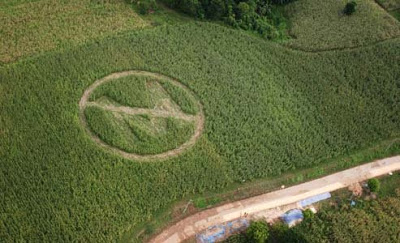 No thanks: An anti-Monsanto crop circle made by farmers and volunteers in the Philippines. Photo byy Melvyn Calderon/Greenpeace HO/A.P. Images.
Monsanto’s Harvest of Fear By Donald L. Barlett and James B. Steele, which follows, first appeared in the May issue of Vanity Fair.

First, some comments from Scott Trimble.

I don’t know if Monsanto is the sole title-holder to “America’s Worst Corporation,” but it is certainly one of those in a dead heat (Exxon-Mobil, Winston-Salem, R.J. Reynolds, McDonald’s, Walmart, Chase, Citi, General Electic, and Pfizer are among those that come to mind). However, this does raise an issue that I think is very important. There is a case to be made for not allowing corporations to hold patents or copyrights. Furthermore, to prevent corporate executives from obtaining the patents for work done by others, there should be abundant evidence of the involvement in the development of the product or idea for each person named in a patent application.

While corporations may pay the salaries of researchers or otherwise fund the research that leads to new patents, it is the inspiration, genius and/or work of individuals that results in new discoveries. I’m not sure that changing patent laws in this way would thwart the efforts of companies like Monsanto, but it is an important step in that direction.

Actually, I believe there is an argument to be made for repealing all patent and copyright law, but I know those who believe that capitalism is valid will disagree.

But to get back to Monsanto, we (the people) ought to be writing laws to break the stranglehold of entities like Monsanto over the essential elements of our lives. Unfortunately, to do that, we are going to have to tear down our entire political system and build something that will truly serve the people’s interest, rather than merely make mention of it.

Now it has targeted milk production. Just as frightening as the corporation’s tactics–ruthless legal battles against small farmers–is its decades-long history of toxic contamination.
By Donald L. Barlett and James B. Steele

Gary Rinehart clearly remembers the summer day in 2002 when the stranger walked in and issued his threat. Rinehart was behind the counter of the Square Deal, his “old-time country store,” as he calls it, on the fading town square of Eagleville, Missouri, a tiny farm community 100 miles north of Kansas City.

The Square Deal is a fixture in Eagleville, a place where farmers and townspeople can go for lightbulbs, greeting cards, hunting gear, ice cream, aspirin, and dozens of other small items without having to drive to a big-box store in Bethany, the county seat, 15 miles down Interstate 35.

Everyone knows Rinehart, who was born and raised in the area and runs one of Eagleville’s few surviving businesses. The stranger came up to the counter and asked for him by name.

As Rinehart would recall, the man began verbally attacking him, saying he had proof that Rinehart had planted Monsanto’s genetically modified (G.M.) soybeans in violation of the company’s patent. Better come clean and settle with Monsanto, Rinehart says the man told him—or face the consequences.

Rinehart was incredulous, listening to the words as puzzled customers and employees looked on. Like many others in rural America, Rinehart knew of Monsanto’s fierce reputation for enforcing its patents and suing anyone who allegedly violated them. But Rinehart wasn’t a farmer. He wasn’t a seed dealer. He hadn’t planted any seeds or sold any seeds. He owned a small—a really small—country store in a town of 350 people. He was angry that somebody could just barge into the store and embarrass him in front of everyone. “It made me and my business look bad,” he says. Rinehart says he told the intruder, “You got the wrong guy.”

When the stranger persisted, Rinehart showed him the door. On the way out the man kept making threats. Rinehart says he can’t remember the exact words, but they were to the effect of: “Monsanto is big. You can’t win. We will get you. You will pay.”

Scenes like this are playing out in many parts of rural America these days as Monsanto goes after farmers, farmers’ co-ops, seed dealers—anyone it suspects may have infringed its patents of genetically modified seeds. As interviews and reams of court documents reveal, Monsanto relies on a shadowy army of private investigators and agents in the American heartland to strike fear into farm country. They fan out into fields and farm towns, where they secretly videotape and photograph farmers, store owners, and co-ops; infiltrate community meetings; and gather information from informants about farming activities. Farmers say that some Monsanto agents pretend to be surveyors. Others confront farmers on their land and try to pressure them to sign papers giving Monsanto access to their private records. Farmers call them the “seed police” and use words such as “Gestapo” and “Mafia” to describe their tactics.

When asked about these practices, Monsanto declined to comment specifically, other than to say that the company is simply protecting its patents. “Monsanto spends more than $2 million a day in research to identify, test, develop and bring to market innovative new seeds and technologies that benefit farmers,” Monsanto spokesman Darren Wallis wrote in an e-mailed letter to Vanity Fair. “One tool in protecting this investment is patenting our discoveries and, if necessary, legally defending those patents against those who might choose to infringe upon them.” Wallis said that, while the vast majority of farmers and seed dealers follow the licensing agreements, “a tiny fraction” do not, and that Monsanto is obligated to those who do abide by its rules to enforce its patent rights on those who “reap the benefits of the technology without paying for its use.” He said only a small number of cases ever go to trial.

Some compare Monsanto’s hard-line approach to Microsoft’s zealous efforts to protect its software from pirates. At least with Microsoft the buyer of a program can use it over and over again. But farmers who buy Monsanto’s seeds can’t even do that.

The Control of Nature

For centuries—millennia—farmers have saved seeds from season to season: they planted in the spring, harvested in the fall, then reclaimed and cleaned the seeds over the winter for re-planting the next spring. Monsanto has turned this ancient practice on its head.

Monsanto developed G.M. seeds that would resist its own herbicide, Roundup, offering farmers a convenient way to spray fields with weed killer without affecting crops. Monsanto then patented the seeds. For nearly all of its history the United States Patent and Trademark Office had refused to grant patents on seeds, viewing them as life-forms with too many variables to be patented. “It’s not like describing a widget,” says Joseph Mendelson III, the legal director of the Center for Food Safety, which has tracked Monsanto’s activities in rural America for years.

Indeed not. But in 1980 the U.S. Supreme Court, in a five-to-four decision, turned seeds into widgets, laying the groundwork for a handful of corporations to begin taking control of the world’s food supply. In its decision, the court extended patent law to cover “a live human-made microorganism.” In this case, the organism wasn’t even a seed. Rather, it was a Pseudomonas bacterium developed by a General Electric scientist to clean up oil spills. But the precedent was set, and Monsanto took advantage of it. Since the 1980s, Monsanto has become the world leader in genetic modification of seeds and has won 674 biotechnology patents, more than any other company, according to U.S. Department of Agriculture data.