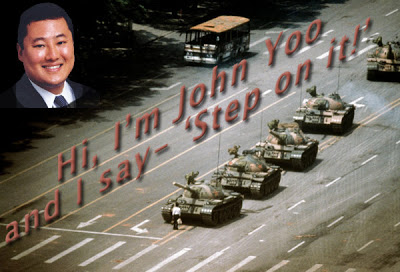 Does the president of the United States have the right to order a detainee buried alive?

Oddly, this grotesque question was posed at a U.S. Congressional hearing last week. Even odder was the answer – from John Yoo, former deputy assistant attorney general in the Bush administration, now a law professor at the University of California.

“I don’t think that I’ve ever given the advice that the president could bury somebody alive,” Yoo told a judiciary subcommittee hearing into detainee interrogations.

Well, I guess that’s comforting to know. But it was striking to watch Yoo evade answering whether he considered there was any treatment so vicious and inhuman that it would be beyond the president’s power to inflict it on a detainee, in the interests of national defence.

Apparently there isn’t. In a public debate in 2005, Yoo was asked if he thought it would be lawful for the president to authorize crushing the testicles of a detainee’s child.

It would seem like a simple “no” would suffice. But here’s how Yoo responded: “I think it depends on why the president thinks he needs to do that.”

Asked about that line last week during his Congressional testimony, Yoo didn’t deny saying it, but protested that it was taken “out of context.” Does that mean there’s a context in which a top legal adviser might advise the president that that’s okay?

After 7 1/2 years of George W. Bush, much of the media and political establishment – which have never shown much interest in holding Bush to account – now appear anxious to simply move on. They seem determined to leave unexamined the full cruelty and mendacity of the Bush administration, with its unlawful wars and blatant violations of the Geneva Conventions.

Moving on is a great idea – once there’s been some accountability, with a full public recognition of wrongdoing, and a commitment to bring about change. Otherwise, nothing will have been learned.

That depravity led to the horrific abuses at Abu Ghraib and at other U.S. prisons in Iraq, Afghanistan, Guantanamo Bay and “black sites” around the world.

The dean of the Massachusetts School of Law, Lawrence Velvel, argues that Bush and top administration officials, including Yoo, should be tried for war crimes. His law school is holding a conference in September to map out ways to try to pursue these prosecutions “if need be, to the ends of the Earth.”

Meanwhile, here in Canada, it seems we’re supposed to avert our gaze. Strong critiques of Bush are slapped down for being “anti-American.”

Certainly, the Harper government, while quick to spot anti-democratic behaviour in Zimbabwe, is blind to it south of the border. Not only has Ottawa failed to join European nations in protesting Guantanamo Bay – and refused to do anything to help the Canadian imprisoned there – it actively co-operates with the United States on security matters and has sent thousands of Canadian troops to Afghanistan to fight in the front lines of Bush’s “war on terror.”

All this is presented as helping our neighbour, and building democracy in Afghanistan. Another way to look at it is that we’re lending support to an administration whose moral compass doesn’t seem to rule out burying people alive or crushing the testicles of children.

This entry was posted in RagBlog and tagged Criminal Justice, Torture, World Opinion. Bookmark the permalink.