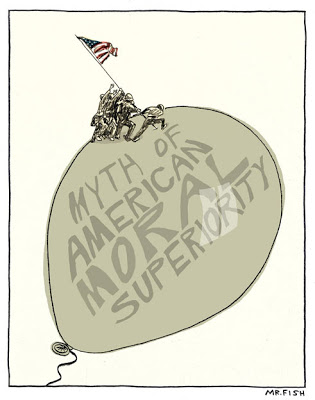 Are we Americans truly savages or merely tone-deaf in matters of morality, and therefore more guilty of terminal indifference than venality? It’s a question demanding an answer in response to the publication of the detailed 370-page report on U.S. complicity in torture, issued last week by the Justice Department’s inspector general.

Because the report was widely cited in the media and easily accessed as a pdf file on the Internet, it is fair to assume that those of our citizens who remain ignorant of the extent of their government’s commitment to torture as an official policy have made a choice not to be informed. A less appealing conclusion would be that they are aware of the heinous acts fully authorized by our president but conclude that such barbarism is not inconsistent with that American way of life that we celebrate.

But that troubling assessment of moral indifference is contradicted by the scores of law enforcement officers, mostly from the FBI, who were so appalled by what they observed as routine official practice in the treatment of prisoners by the United States in Afghanistan, Iraq and Guantanamo that they risked their careers to officially complain. A few brave souls from the FBI even compiled a “war crimes file,” suggesting the unthinkable — that we might come to be judged as guilty by the standard we have imposed on others. Superiors in the Justice Department soon put a stop to such FBI efforts to hold CIA agents and other U.S. officials accountable for the crimes they committed.

That this systematic torture was carried out not by a few conveniently described “bad apples” but rather represented official policy condoned at the highest level of government was captured in one of those rare media reports that remind us why the Founding Fathers signed off on the First Amendment.

“These were not random acts,” The New York Times editorialized. “It is clear from the inspector general’s report that this was organized behavior by both civilian and military interrogators following the specific orders of top officials. The report shows what happens when an American president, his secretary of defense, his Justice Department and other top officials corrupt American law to rationalize and authorize the abuse, humiliation and torture of prisoners.”

One of those top officials, who stands revealed in the inspector general’s report as approving the torture policy, is Condoleezza Rice, who in her capacity as White House national security adviser turned away the concerns of then-Attorney General John D. Ashcroft as to the severe interrogation measures being employed. Rice, as ABC-TV reported in April, chaired the top-level meetings in 2002 in the White House Situation Room that signed off on the CIA treatment of prisoners — “whether they would be slapped, pushed, deprived of sleep or subjected to simulated drowning, called water boarding. …” According to the report, the former academic provost of Stanford University came down on the side of simulated drowning.

As further proof that women are not necessarily more squeamish than men in condoning such practices, the report offers examples of sexual and religious denigration of the mostly Muslim prisoners by female interrogators carrying out an official policy of “invasion of space by a female.” In one recorded instance observed by startled FBI agents, a female interrogator was seen with a prisoner “bending his thumbs back and grabbing his genitals … to cause him pain.” One of the agents testified that this was not “a case of a rogue interrogator acting on her own.” He said he witnessed a “pep rally” meeting conducted by a top Defense Department official “in which the interrogators were encouraged to get as close to the torture statute line as possible.”

That was evidently the norm, according to FBI agents who witnessed the interrogations. As The New York Times reported, “One bureau memorandum spoke of ‘torture techniques’ used by military interrogators. Agents described seeing things like inmates handcuffed in a fetal position for up to 24 hours, left to defecate on themselves, intimidated by dogs, made to wear women’s underwear and subjected to strobe lights and extreme heat and cold.”

In the end, what seems to have most outraged the hundreds of FBI agents interviewed for the report is that the interrogation tactics were counterproductive. Evidently the FBI’s long history in such matters had led to a protocol that stressed gaining the confidence of witnesses rather than terrorizing them into madness. But an insane prisoner is the one most likely to tell this president of the United States what he wants to hear: They hate us for our values.

[Robert Scheer’s new book, The Pornography of Power: How Defense Hawks Hijacked 9/11 and Weakened America, will be released June 9 by Twelve. ]

This entry was posted in RagBlog and tagged Bush, Conspiracy, Torture, U.S. Government. Bookmark the permalink.