Morici: The Economy Is a Two Wheel Recession 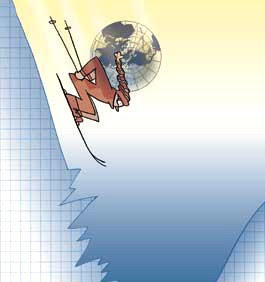 The Labor Department reported the economy lost 240,000 payroll jobs in October, after losing 284,000 jobs in September. This was much worse than was expected and represents wholesale capitulation.

The economy is a two wheel recession. The banking meltdown and failure of the Treasury bailout to free up credit are choking the housing market and construction industry, and falling retail sales, month after month, is leaving businesses with unsold goods and forcing layoffs in manufacturing and services alike.

The challenges facing President-elect Barack Obama could not be clearer. He must reverse the hemorrhaging of high quality jobs and declining real wages, and set the course to restore high quality growth. In particular, Obama’s policies must instigate growth that is not founded on excess borrowing by American consumers and from foreigners.

The economy has shed 1.2 million jobs since December, as the full weight of the banking crisis, trade deficit with China and burdens imposed by high-priced imported oil are bearing down on manufacturing, construction and the broader economy with unrelenting pressure.

Unemployment increased to 6.5 percent in October; however, factoring in discouraged workers, unemployment is closer to 8.2 percent. Add workers in part time positions that cannot find full time employment and the hidden unemployment rate is about 12 percent.

Reflecting a weaker job market, the wages of most working Americans lagged inflation through the recent economic recovery, and are now likely to decline further as the economy falls into a recession.

The banking crisis, hidden unemployment and wages lagging inflation made the economy the most important issue in the Presidential campaign. President-elect Obama got traction out of his proposals to redistribute income by raising taxes on the top five percent and cutting taxes for many other Americans. However, cutting the typical worker’s taxes by a few hundred dollars will make them feel better off for only a few months, and redistributionist policies won’t do much to create better paying jobs that have been lost in manufacturing, construction and elsewhere in the economy.

To accomplish lasting prosperity, President-elect Obama will have to fix the banks and the trade deficit. Obama must ensure that the banks use the $700 billion in federal bailout assistance to make new loans to homebuyers and businesses, and not squander federal largess by padding executive bonuses, acquiring other banks and pursuing new high-return, high-risk lines of businesses in merger activity, carbon trading and complex derivatives. Industry leaders like Citigroup have announced plans to move in those directions. Many of these bankers enjoyed influence in and contributed generously to the Obama campaign. Now it remains to be seen if a President Obama can stand up to these same bankers and persuade or compel them to reverse course.

In addition, Obama must address the huge cost of imported oil and trade deficit with China or any effort to resurrect the economy is doomed to create massive foreign borrowing, another round of excessive consumer borrowing, and a second banking crisis that the Treasury and Federal Reserve will not be able to reverse.

Ultimately, reducing the oil import bill will require higher mileage standards for automobiles and assistance to automakers to accelerate the build out of alternative, high mileage vehicles. Fixing trade with China will require a tax on dollar-yuan transactions if China continues to refuse to stop subsidizing dollar purchases of yuan to prop up its exports and shift Chinese unemployment to the U.S. manufacturing sector.

Near term, a stimulus package focused on infrastructure is critical for resuscitating growth. The recent round of tax rebate checks ended up in savings accounts or spent at the Wal-Mart on Chinese goods, and did little to create jobs or accelerate growth. Whereas projects to repair roads, rehabilitate schools and refurbish public buildings would create high-paying jobs at home and provide a legacy in capital improvements that assist growth now and in the future.

In October, wages rose a moderate 0.4 cents per hour, or 0.2 percent, and not enough to keep up with inflation. Moderate wage increases and decent labor productivity growth should help abate Federal Reserve concerns about inflation. Core inflation—nonfood and nonenergy price inflation—should decline over the remainder of 2008 and settle below 2 percent per year in 2009.

The unemployment rate was 6.5 percent in October, up from 6.1 percent in September. However, these numbers belie more fundamental weakness in the job market. Discouraged by a sluggish job market, many more adults are sitting on the sidelines, neither working nor looking for work, than when George Bush took the helm. Factoring in discouraged workers raises, who have left to workforce, and those forced into part time work, the unemployment rate to about to 12 percent.

During the presidential campaign, declining real wages and fewer adults working gave Barack Obama’s proposals to redistribute income through the tax system a lot of traction. However, those policies will do little to correct the fundamental systemic problems that are destroying good jobs and squeezing middle class families, even if they would make them feel better for a little while.

Going forward, solutions that create better jobs will require cutting the trade deficit by at least half to substantially boost domestic manufacturing, solving the problems of the large money center banks to get mortgage money flowing and housing construction going again, and energy policies that more aggressively develop alternative fuel sources, conserve oil, and open up new domestic fields for conventional oil and gas production. Reducing dependence on foreign oil requires doing all things environmentalists want us to do and all things environmentalists don’t want us to do.

If the Democrats are not willing to drill for more oil off shore and take on the automobile industry’s resistance to significantly higher mileage vehicles, the U.S. economy will be even more indenture to Persian Gulf oil exporters at the end of President-elect Obama’s first term than it is today.

Finally, diplomacy has failed to redress the currency issue with China. If President Obama is not willing to take tough steps to redress the trade imbalance with China and reduce oil imports, together the Persian Gulf oil exporters and China’s sovereign wealth funds may be able to buy the New York stock exchange eight years from now. Americans, outside those working for the New York banks that facilitate this sellout, will find their best futures waiting on tables for Middle East and Chinese tourists.

Manufacturing, Construction and the Quality of Jobs

Historically, manufacturing and construction offered workers with only a high school education the best pay, benefits and opportunities for skill attainment and advancement. Troubles in these industries push ordinary workers into retailing, hospitality and other industries where pay often lags.

Manufacturing has lost 90,000 jobs, and over the last 103 months, manufacturing has shed more than four million jobs. The trade deficit with China and other Asia exporters are the major culprits.

The dollar is too strong against the Chinese yuan, Japanese yen and other Asian currencies. The Chinese government intervenes in foreign exchange markets to suppress the value of the yuan to gain competitive advantages for Chinese exports, and the yuan sets the pattern for other Asian currencies. Similarly, Beijing subsidizes fuel prices and increasingly requires U.S. manufacturers to make products in China to sell there.

Ending Chinese currency market manipulation and other mercantilist practices are critical to reducing the non-oil U.S. trade deficit, and instigating a recovery in U.S. employment in manufacturing and technology-intensive services that compete in trade. Neither President Bush nor Congressional leaders like Charles Rangel and Chuck Schumer have been willing to seriously challenge China on this issue, and Senators McCain and Obama appeared comfortable with continuing their approaches during the campaign.

Now President-elect Barack Obama must alter his position, and get behind a policy to reverse the trade imbalance with China, or preside over the wholesale destruction of many more U.S. manufacturing jobs. These losses have little to do with free trade based on comparative advantage. Instead, they deprive Americans of jobs in industries where they are truly internationally competitive.

In the end, without assertive steps to fix trade with China, as well as fix the banks and curtail oil imports, the Bush years will seem like a walk through the park compared to the real income losses Americans will suffer during the Obama years.

Instead, were the trade deficit cut in half and the banks fixed, manufacturing would recoup at least 2 million jobs, U.S. growth would exceed 3.5 percent a year. Real wages and domestic savings would climb, and the federal government would receive more revenues to balance its budget or address other pressing domestic needs.

The choices for the new president are simple. It’s either renaissance or decline. Fix the banks, trade with China and energy policy or become America’s Nero.

Peter Morici is a professor at the University of Maryland School of Business and former Chief Economist at the U.S. International Trade Commission.

This entry was posted in RagBlog and tagged Economy, Recession. Bookmark the permalink.

2 Responses to Morici: The Economy Is a Two Wheel Recession