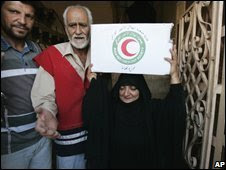 The Red Cross is warning that despite some improvements in security in Iraq, the condition of the country’s infrastructure remains dire.

In a statement issued from their headquarters in Geneva, the Red Cross said it was particularly concerned about poor water supplies.

It estimates that over 40% of Iraq’s civilian population still has no access to clean mains water.

The organisation says that the health of millions Iraqis is at risk.

The International Committee of the Red Cross (ICRC) describes the condition of Iraq’s health, water and sanitation services as dire – failing to meet the needs of a large part of the population.

Following this summer’s outbreak of cholera, Beatrice Megevand Roggo, Red Cross Head of Operations for the Middle East, said she was especially concerned about the lack of clean water supplies.

Ms Megevand Roggo said even the most basic infrastructure in Iraq is not functioning.

The Red Cross agrees security has improved recently in some parts of Iraq and this has allowed the organisation to expand its operations.

But, the ICRC insists, it can not be expected to provide basic services indefinitely.

“There is only so much a humanitarian organisation can do,” said Ms Megevand Roggo.

“Their own responsibility is also something that matters a lot – you cannot only count on humanitarians to solve the problems of a country like Iraq.”

That is a clear message to the government in Baghdad, and to the coalition forces.

Now that, five-and-a-half years after the overthrow of Saddam Hussein, the violence has finally begun to abate; the authorities should not wait too long to start providing the simple necessities of normal life.

The great plume of black smoke that rises above the burn pit at Balad Air Base in northern Iraq is such an invariable part of the horizon that software engineers writing a program to help fighter pilots navigate their way onto the base made it a central part of the digitally simulated skyline.

Now the burn pit has become the central part of a conversation about what obligations the military has to keep its members healthy during war.

A memo being circulated at military bases across the country, written by an officer from Hill Air Force Base, calls the pit an “acute health hazard” – one that may have increased the risk of chronic problems for hundreds of thousands of service members and contractors who have done tours of duty at the largest base in Iraq.

As they have taken steps to end the practice, Air Force officials claim it doesn’t pose a health risk.

The critical memo was written by environmental engineer Darrin Curtis, who served with the 332nd Expeditionary Medical Group at Balad from September 2006 to January 2007. He expressed his dismay with the burning of toxic chemicals, plastics and other toxic waste – including, according to some reports, amputated limbs from the base hospital – and the lack of any apparent concern for the health of those breathing in the smoke.

Curtis wrote that health risks associated with smoke inhalation and respiratory exposure to toxic fumes produced by the burn could result in chronic ailments for service members at a base already ripe with other wartime hazards, including frequent rounds of indirect fire that earned the facility the nickname “Mortaritaville.”

“It is amazing that the burn pit has been able to operate without restrictions over the past few years without significant engineering controls put in place,” Curtis wrote, according to a copy of the memo posted by former soldier Aaron Rognstad on his Website, www.blogflack.blogspot.com.

Rognstad, a former soldier in the Colorado National Guard who served two tours of duty at Balad, told The Salt Lake Tribune he was aghast at what was going into the pit. “They were even burning the plastic trays we would eat our lunch on,” he said. “And we were breathing in all that plastic.”

Rognstad said some days at the base were worse than others. “Sometimes, when it would rain, it would rain ash on us,” he said. “We were all pretty shocked by that but what can you do, really?”

Hill Air Force Base declined to make Curtis available for an interview, saying that any questions to the lieutenant colonel – who has a doctorate in environmental engineering and nearly two decades of experience conducting health risk assessments, according to the memo – would have to be censored through the office of the Secretary of the Air Force, “so you get the Air Force perspective.”

And that perspective is that the process is safe. Air Force spokesman James Garcia said that there are “no short- or long-term health risks, and no elevated cancer risks are likely among personnel deployed to Balad.”

Nonetheless, Garcia said, the Air Force’s ultimate goal is to eliminate all open burning through controlled incineration and an active recycling program.

The Balad burn pit, its signature smoke plume and its omnipresent stink are well known to anyone who has even stepped foot on the base. In his blog, www.madeadifference.blogspot.com, Air Force surgeon Christopher Coppola, who served with Curtis in the 332nd, described a “column of dingy gray smoke rising from the burn pit,” which released a constant “perfume of burning vinyl, cardboard, and body parts.”

“Shame it is upwind from the hospital,” Coppola wrote, ” guess they just wanted the particles to act as an irritant to help my post-op patients cough more vigorously and expand their lungs after surgery.”

Coppola told The Tribune on Tuesday that “I did think the military would do something about it,” following his most recent visit to Balad, which ended earlier this year.

But given the number of military members on the base, and the dangers he believes are associated with such free burns, Curtis wrote that the practice should have been ended long ago.

“Burn pits may have been an acceptable practice in the past, however today’s solid waste contain materials that were not present in the past, that can create hazardous compounds,” Curtis wrote. “Open burning may only be practical when it is the only available option and should be only used in the interim until other ways of disposal can be found. This interim fix should not be years, but more in the order of months.”