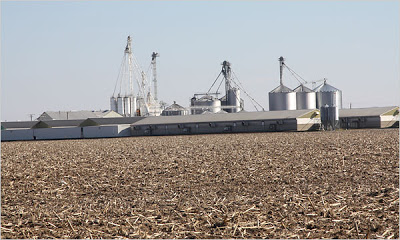 The late Tom Anderson, the family doctor in this little farm town in northwestern Indiana, at first was puzzled, then frightened.

He began seeing strange rashes on his patients, starting more than a year ago. They began as innocuous bumps — “pimples from hell,” he called them — and quickly became lesions as big as saucers, fiery red and agonizing to touch.

They could be anywhere, but were most common on the face, armpits, knees and buttocks. Dr. Anderson took cultures and sent them off to a lab, which reported that they were MRSA, or staph infections that are resistant to antibiotics.

MRSA (methicillin-resistant Staphylococcus aureus) sometimes arouses terrifying headlines as a “superbug” or “flesh-eating bacteria.” The best-known strain is found in hospitals, where it has been seen regularly since the 1990s, but more recently different strains also have been passed among high school and college athletes. The federal Centers for Disease Control and Prevention reported that by 2005, MRSA was killing more than 18,000 Americans a year, more than AIDS.

Dr. Anderson at first couldn’t figure out why he was seeing patient after patient with MRSA in a small Indiana town. And then he began to wonder about all the hog farms outside of town. Could the pigs be incubating and spreading the disease?

“Tom was very concerned with what he was seeing,” recalls his widow, Cindi Anderson. “Tom said he felt the MRSA was at phenomenal levels.”

By last fall, Dr. Anderson was ready to be a whistle-blower, and he agreed to welcome me on a reporting visit and go on the record with his suspicions. That was a bold move, for any insinuation that the hog industry harms public health was sure to outrage many neighbors.

So I made plans to come here and visit Dr. Anderson in his practice. And then, very abruptly, Dr. Anderson died at the age of 54.

There was no autopsy, but a blood test suggested a heart attack or aneurysm. Dr. Anderson had himself suffered at least three bouts of MRSA, and a Dutch journal has linked swine-carried MRSA to dangerous human heart inflammation.

The larger question is whether we as a nation have moved to a model of agriculture that produces cheap bacon but risks the health of all of us. And the evidence, while far from conclusive, is growing that the answer is yes.

A few caveats: The uncertainties are huge, partly because our surveillance system is wretched (the cases here in Camden were never reported to the health authorities). The vast majority of pork is safe, and there is no proven case of transmission of MRSA from eating pork. I’ll still offer my kids B.L.T.’s — but I’ll scrub my hands carefully after handling raw pork.

Let me also be very clear that I’m not against hog farmers. I grew up on a farm outside Yamhill, Ore., and was a state officer of the Future Farmers of America; we raised pigs for a time, including a sow named Brunhilda with such a strong personality that I remember her better than some of my high school dates.

One of the first clues that pigs could infect people with MRSA came in the Netherlands in 2004, when a young woman tested positive for a new strain of MRSA, called ST398. The family lived on a farm, so public health authorities swept in — and found that three family members, three co-workers and 8 of 10 pigs tested all carried MRSA.

Since then, that strain of MRSA has spread rapidly through the Netherlands — especially in swine-producing areas. A small Dutch study found pig farmers there were 760 times more likely than the general population to carry MRSA (without necessarily showing symptoms), and Scientific American reports that this strain of MRSA has turned up in 12 percent of Dutch retail pork samples.

Now this same strain of MRSA has also been found in the United States. A new study by Tara Smith, a University of Iowa epidemiologist, found that 45 percent of pig farmers she sampled carried MRSA, as did 49 percent of the hogs tested.

The study was small, and much more investigation is necessary. Yet it might shed light on the surge in rashes in the now vacant doctor’s office here in Camden. Linda Barnard, who was Dr. Anderson’s assistant, thinks that perhaps 50 people came in to be treated for MRSA, in a town with a population of a bit more than 500. Indeed, during my visit, Dr. Anderson’s 13-year-old daughter, Lily, showed me a MRSA rash inflaming her knee. 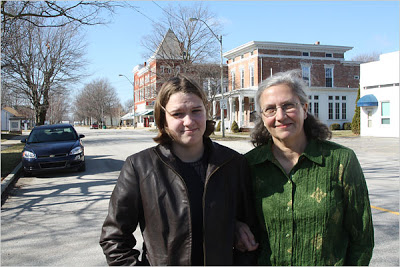 So what’s going on here, and where do these antibiotic-resistant infections come from? Probably from the routine use — make that the insane overuse — of antibiotics in livestock feed. This is a system that may help breed virulent “superbugs” that pose a public health threat to us all. That’ll be the focus of my next column, on Sunday.

This entry was posted in RagBlog and tagged Food Contamination, Food Production, Health. Bookmark the permalink.

2 Responses to MRSA: A Potential Cost of Industrial Agriculture