Much of Iraqi Oil Remains "Off-Line" 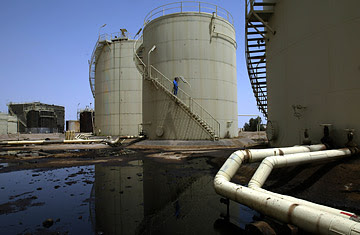 BASRA — Roughly once a week a flotilla of half a dozen or so tankers heaves into the steamy southern Iraqi port of Khur al-Zubar, and the normally sleepy docks jump to life. Teams of workers scramble over ships arriving mainly from Dubai, Bahrain and other points around the Persian Gulf to connect hoses for the flow of diesel, kerosene and gasoline. Old-fashioned gas station tickers beside the ships clatter as thousands of liquid tons begin moving.

All that would seem business as usual at a harbor for a major oil producer, except that much of what’s flowing through Khur al-Zubar is coming into Iraq rather than heading out. These days, the facility, originally built more than 30 years ago for exporting oil, takes in roughly 66,460 metric tons of fuel a month, only slightly less than the amount of oil the area pumps for sale on the world market. (Iraq, as a whole, imports roughly a fifth of its oil.) “It’s a problem,” says port manager Hussein Hamid al-Maliki, who’s working on building another jetty to up the inflow still further. “Iraq bringing benzene and gasoline from outside? It’s a joke.”

Few are laughing. Frustration over the sluggish pace of Iraq’s oil production is rising in the country and abroad as global prices soar. (At the same time, current oil revenues account for 90% of the government’s substantial budget surplus of roughly $50 billion, unspent because of inefficient infrastructure and bureaucracy.) Much of Iraq starves for electricity and fuel as vast amounts of oil and gas sit untapped in the ground. Iraq’s oil industry needs a virtual overhaul to reach a level of production that could erase chronic fuel shortages in the country and rake in windfall profits to be had on the world market. The Iraqi government and more than two dozen oil companies are in the midst of drafting plans to begin the work. But the chances of success anytime soon are far from certain. Political pitfalls in Baghdad and ground realities in areas where resources rest could undo the long awaited bonanza before it begins.

In April, Iraq’s Ministry of Oil drew up an elite roster of companies ranging from Malaysia’s Petronas to Russia’s Gazprom. The list of 35 corporations, including six American giants, reads like a who’s who of global oil players, all of whom are invited to bid on eight major oil and gas projects Iraq wants to launch next year. The goal is to get Iraq, currently producing about 2 million barrels a day, pumping up to 3 million by the end of 2009. The eight oil projects on offer to outside companies chiefly involve refurbishing and developing various oil and gas fields in southern Iraq. American and Iraqi officials say the projects can go forward without passage of a long-delayed national oil law, as long as each contract individually is approved by the Iraqi government and endorsed by the parliament.

In the largely autonomous Kurdish territories of northern Iraq, the regional government is already moving ahead with oil deals of its own that the central government in Baghdad considers illegal. For the most part only small wildcatter firms have bypassed Baghdad for such deals, since their future legality remains uncertain in the absence of a national oil law. Most big players at present appear to be eyeing potential ventures in Iraq’s vast oil territory around Basra instead. Years of neglect have left many oil fields there looking like junkyards. Rusting vehicles, heaps of trash and pools of spilled oil litter a hazy expanse dotted with plumes of flames from gas flares. “We need equipment, we need instruments, we need a lot of technical help,” says Jabbar al-Ueaibi, the head of South Oil Company, an arm of Iraq’s Ministry of Oil.

Al-Ueaibi says South Oil Company is in the process of rehabilitating about 200 wells that could increase production by about a quarter million barrels a day by the end of the year. Perhaps as much as 2.5 million barrels a day could be flowing from Iraq within a year if South Oil Company can get some further outside help from companies in the coming months before any major deals are signed. Production levels beyond that, al-Ueaibi says, will depend on how much outside help Iraq can get.

But any oil company looking to get involved in Iraq faces some major disincentives. Without an oil law, which appears unlikely any time soon because of political bickering, companies wanting to start work in Iraq must essentially lobby both the Iraqi parliament and the government, which rarely find consensus. Two of the biggest projects, gas fields in the provinces of Anbar and Diyala, sit in territory plagued by violence and tribal politics. And none of the ventures are likely to allow companies to have a stake in any newly discovered oil reserves, the real moneymaking prize. “These deals themselves are not likely to be hugely lucrative,” says Charles Ries, the American embassy’s economic coordinator in Iraq.

That leaves much of the oil in the world’s third-largest reserves effectively off line for the time being and hopes for a sharp drop in prices at the pump in Iraq, the United States and around the world still distant. “This is a hope,” says al-Ueaibi of Iraq’s potential rise in oil production. “Let’s say hopeful wishing.”