Mumbai LeT Terrorists May Have Trained in Iraq

I want to explain my headline. It is now known that the Lashkar-e-Taiba (LeT) are responsible for the Mumbai attacks. It is also know that the LeT have been active in the insurgency in Iraq since 2004. Although specific training is identified in this article, it remains a possibility that the Iraq violence has provided a training ground for LeT fighters, some of whom may have been part of the attacks on Mumbai. If even remotely connected, this provides further evidence that George Bush’s war on terror is yielding even greater terrorism world-wide, which is strongly suggested for many other reasons.

Bottom line? It is time to end the War on of Terror and think outside the box for other, meaningful and constructive solutions to the terrorist violence in the world. 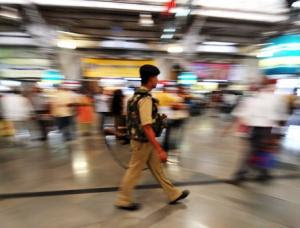 ATTACKS PLANNED MONTHS AGO — One of the attackers captured by police said the terror group began their voyage to India on Nov. 12 or Nov. 13, and that they had earlier received trained in marine and urban warfare. The photo shows a policeman guarding the CST railway station in Mumbai on Dec. 1. Order at the railway station, a landmark building in Mumbai, has returned to normal after the terror attacks. (Xinhua/Photoshot via Newscom)
Spy Agencies Gather Intel on LeT After Mumbai Attacks
By Richard Sale / December 2, 2008

The extremist al-Qaida affiliate Lashkar-e-Taiba, or Let, has been named as the perpetrator of the recent horrific Mumbai attacks, according to U.S. officials. “This was definitely a LeT operation. There’s no doubt about it,” said a former senior CIA official with close knowledge of the dossier.

Last week’s attacks on 10 sites in Mumbai killed 188 people in three days including six Americans in the heart of India’s commercial capital, putting the government there in a state of shock. Indian forces killed nine assailants and wounded one, and the search is still going on for more.

“Indian security may not have gotten them all,” a U.S. official said.

According to Indian press reports, names and phone numbers were found in the wallets and cell phones of the attackers. U.S. officials said they believe the data is credible.

A former U.S. intelligence official said that the CIA “had warned the government of India that LeT was planning a terrorist attack on Mumbai but the intelligence wasn’t specific enough.”

Although known mainly as a Kashmiri group, LeT was actively fighting U.S. forces on the ground in Iraq, beginning in late 2003-2004, U.S. officials said. They still had a presence through 2007 when their members began to shrink.

According to Indian press reports, confirmed as credible by U.S. and serving former intelligence officials, data obtained from a captured satellite phone found on a vessel seized in the Arabia Sea revealed that the assaults were planned at least six months ago.

Ajmai Amir Kamal, one of the attackers captured by police, has claimed that the group launched their voyage to India on Nov. 12 or Nov. 13, and that they had been trained in marine warfare along with a special course Daura-a-Shifa conducted by LeT, according to the Indian Research for Conflict Management that operates the South Asia Terrorism Portal (SATP).

According to the former senior U.S. intelligence official, Kamal acknowledged he was a resident of Faridot near Multan in the Punjab province of Pakistan.

SATP claimed that Kamal said they were not suicide bombers but had planned to escape on Nov. 27 using a route plotted for their return and stored in a Global Positioning System device.

U.S. officials said they believe Kamal’s statements “plausible” and that they are still gathering evidence, while continuing to corroborate the facts “beyond doubt,” as one U.S. official said.

U.S. officials were also investigating reports that the group’s cell phone was used to call Yusuf Muzmail, the Lashkar commander in Muzaffarabad. The attacking group remained in Karachi for four days or so before launching the assault. A cell phone found on a dead fisherman at sea had been used to call Pakistan. The Indian Coast Guard warned of a possible sea infiltration on Nov. 18, but the Indian government was inert.

“The Indian response to this puts its antiterrorist groups in a very bad light. The response was disgracefully scattered,” another former senior U.S. official said.

Other versions claim that two Pakistani ships, MV Al-Kabir and MV Alpaha were used as “mother ships” to transport the terrorists. Both have been detained in a joint operation by Border Security Guards and Navy Coast Guard ships.

The extremists used an inflatable boat and a speedboat to land near the Sasson dock, very near the Taj Continental Hotel, U.S. officials said. Once ashore they split up into five teams. Two batches went by taxi to the Victoria Terminus station. The three others headed for Nariman House, the Oberoi Hotel and Café Leopold. The last quartet went to the Taj Hotel.

U.S. officials have confirmed reports by Israeli intelligence that the jihadis released 17 Russian hostages after checking their passports, despite known and lingering animosities over the Chechen conflict. The motive is unclear, they said.

Most U.S. terrorism experts believe that LeT is an al-Qaida affiliate, a subcontractor to Osama bin Laden helping to run al-Qaida’s infrastructure, fund-raising, recruiting and propaganda in South Asia.

In 1989, bin Laden had declared the liberation of Kashmir an al-Qaida objective and soon the radical Jaish-e-Mohammed (JEM) merged with LeT which was active in promoting the independence of Kashmir from India, a popular cause among Pakistani Muslims that provided a sure recipe for inaction on the part of the Pakistan government.

Although described by many as a Kashmiri group, LeT is in fact made up of Punjabis with a sprinkling of Afghanis, Arabs, Bangladeshis, Southeast Asians and the occasional Westerner.

In addition to wanting to annex Kashmir to Pakistan, the organization also sought to establish an extremist Islamic Caliphate. LeT had increasingly seen America as an obstacle on a par with India and Israel to the spread of jihadist or Salafist (Wahabi) Islam.

The parent of LeT is a Saudi jihadist group, Ahl-i-Hadith which supports jihad in Kashmir. U.S. State Department officials say the Saudis saturate their media with pleas for Kashmir’s independence.

According to former CIA official and terrorism expert Marc Sagemen, LeT is only one of several regional jihadist organizations that operate to further al-Qaida objectives without close supervision from the core al-Qaida leadership, which has been severely weakened by losses and has shrunk to only 100 members.

LeT became active in Iraq in 2004 and attracted notice when U.S. forces arrested a Pakistani national, Dilshad Ahmad, a long-time LeT operative from the province of Punjab who had led terror bombings against India for four years.

Through interrogations, U.S. officials have established that LeT had moved its operations to the theater of Iraq. LeT had been named a terrorist organization by the U.S. State Department in 2001 following the Sept. 11, 2001 attacks. Until then they had fought mainly in Kashmir, India, and Chechnya.

U.S. officials said that LeT was involved in the July 7, 2005 terrorist attacks against the London Underground.

The Mumbai attacks were unusual in that they specifically targeted foreigners such as British, Americans and Israelis, and for the first time, took hostages, U.S. officials said.

FBI officials at home and CIA and other intelligence agencies overseas are stepping up scrutiny of the activities of LeT, U.S. officials tell the Middle East Times.

Perhaps most startling is the fact that LeT executed a dry run of the operation in 2007 to test the reliability of the sea method of attacks, U.S. officials said.

The use of mother ships to transport terrorists had long been part of the method of operation of the Palestinian Liberation Organization, U.S. officials said.

According to The Hindu Times, LeT had sent an eight-man squad to Mumbai by fishing boat in 2007 in a dry run of the attack to test the reliability of the sea route.

The paper also quoted Jammu and Kashmir police investigators as saying the men in groups of two traveled by road from Bait-ul-Mujahidee, LeT’s headquarters in Muzaffarabad to Rawalpindi before heading south to Karachi by train. There they sat in separate compartments for the Rawalpindi to Karachi journey.

After waiting for a week, they were allowed to start their dry run for Mumbai.

Arriving late at night the raiders hid in a safe house near the Bahhabna Research Center. Many of India’s nuclear installations are close to the sea.

Once disembarked the squad traveled north to Jammu and Kashmir, the newspaper said.

After four days at sea, their commercial fishing boat was intercepted by the Indian Coast Guard. After the Coast Guard captain was bribed, the LeT vessel was allowed to proceed but, unknown to the terrorists, the Coast Guard had planted a tracking device aboard, which led police to arrest them in Jammu.

One of the prisoners, Abul Majid Araiyan told interrogators that he had taken religious classes in a Pakistani madrassa, and in 2003, only days after Pakistani President Pervez Musharraf banned Let, had received an advanced 40-day advanced course in guerrilla warfare. Araiyan officially joined LeT in 2005.

This entry was posted in RagBlog and tagged India, Terrorism, War on Terror. Bookmark the permalink.