Murray Polner :
The Ukrainian mess: Where are the skeptics?

is this another replay of the Vietnam and Iraq eras when our mass media merely echoed government spokespeople? 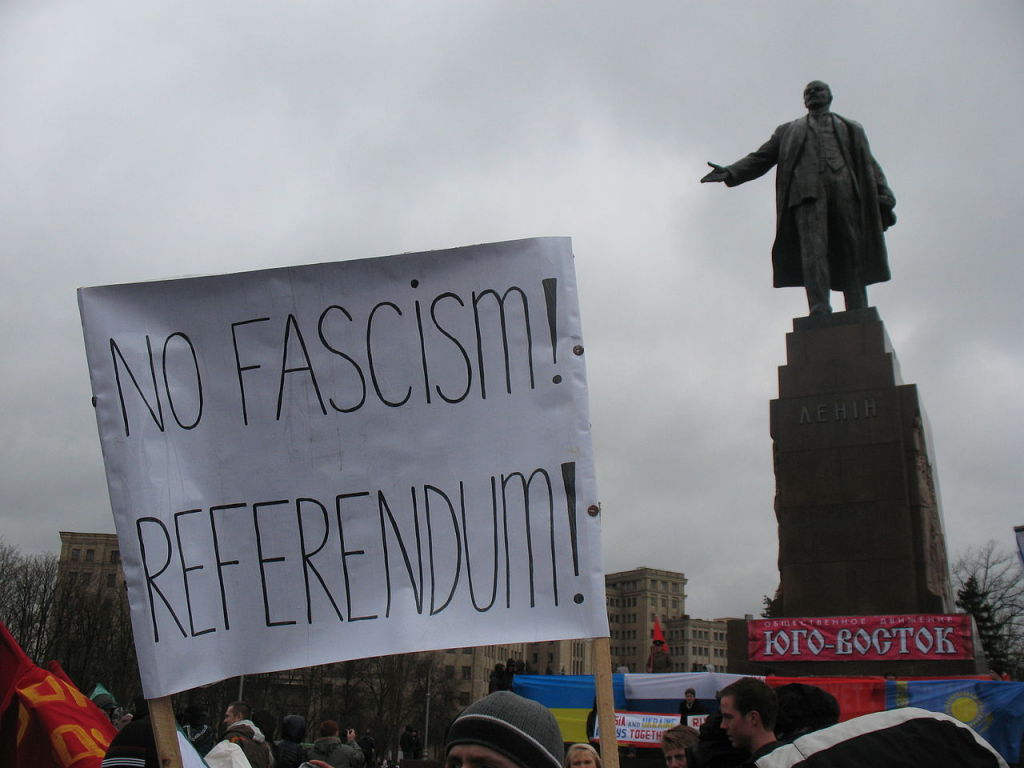 Anti-government poster at a rally on Freedom Square in Kharkiv, April 2014. Image from Creative Commons.

Poor Katrina van den Heuvel and husband Stephen Cohen, she the editor of The Nation and he a scholar of Russian history and the author of a definitive biography of Nikolai Bukharin, who was executed during Stalin’s mad blood purges, and more recently, Soviet Fates and Lost Alternatives: Stalinism and the New Cold War.

Almost 25 years after the collapse of the USSR, they wrote, “The White House declared a new Cold War on Russia — and that, in a grave failure of representative democracy, there was scarcely a public word of debate, much less opposition, from the American political or media establishment” — not to mention the craven silence of our usually voluble pro-peace groups and liberal Democrats.

“Both sides in the confrontation,” they wrote — correctly — “the West and Russia, have legitimate grievances. Does this mean, however, that the American establishment’s account of recent events should not be questioned? That it was imposed on the West by Putin’s ‘aggression’ and this because of his desire ‘to re-create as much of the old Soviet empire as he can’”?

Still, they aren’t entirely alone. Henry Kissinger challenged Washington’s hawks, always ready for war (so long as their own kids never have to serve). In The Washington Post he called for a cease-fire in eastern Ukraine, while denouncing “the demonization of Vladimir Putin,” which, he wrote, is not a policy, but rather an “alibi for the absence of one.”

A serious objection found in even so unlikely a site as the Wall Street Journal. There, in the House of Murdoch, Hans-Werner Sinn, president of the Ifo Institute for Economic Research in Germany, reminded readers that, while “the annexation of Crimea was a violation of international law,” which it was — emulating the way the U.S. stole Guantanamo from Cuba in 1903 — “it must be borne in mind that the present crisis was triggered by the West. The overtures made by NATO to Georgia, Moldova and Ukraine in recent years effectively threatened to encircle Russia’s Black Sea Fleet in the only ice-free port at its disposal.”

The whole mess was instigated by Western hawks.

That’s the point: The whole mess was instigated by Western hawks. Even more: On-and-off hawk Thomas Friedman has actually acknowledged some facts about the origin of the crisis, which are rarely found in his paper’s editorials or op-eds. In early May, he questioned the decisions of the “Bush I and Clinton teams to expand NATO [which] laid the seeds of resentment that helped create Putin and Putinism” and at the same time blessed our new best friends in Kiev who have in the past specialized in civic corruption.

The Times did finally run a sensible, thoughtful and absolutely necessary op-ed, “The War on Truth in Ukraine” by Keith A, Darden of American University. He pointed out how little we know about what has been happening, drawing attention to all the manipulation, lies, half-truths, and whole truths on all sides.

Who, for example, was responsible for that anti-Semitic leaflet in the “Donetsk Republic” in eastern Ukraine? Who burned the union building in Odessa causing the deaths of so many pro-Russians? And who sprayed “Swastika-like symbols on the building, along with graffiti reading ‘Galician SS’”? Is there still a stench of anti-Semitism despite official denials. And who murdered so many people in Kiev’s Maidan Square last January?

How influential are the extremist Right Sector and Svoboda in the interim Kievan government? Do the pro-Russian rebels in eastern Ukraine answer to Moscow? Did Vitaly Churkin, Russia’s UN ambassador to the UN, have any hard evidence when he told two Times reporters “there were English-speaking foreigners among ‘ultranationalist groups’ in Slovyansk,” a dramatic game-changing event if true but which the U.S. ambassador to the UN Samantha Power promptly called a lie.

Why did our vice president and CIA director suddenly fly to Kiev? Was Victoria Nuland, with very close family ties to the neocons, sent to Ukraine by John Kerry, her ostensible boss, or was she acting on her own? And what, exactly, is Putin, no libertarian he, up to?

In all the frenzied chatter about a new Cold War, sanctions, and rumors of troops, tanks and copters, does anyone really know? Or is this another replay of the Vietnam and Iraq eras when our mass media merely echoed government spokespeople?

The Guardian’s Suemas Milne has been on the scene since the earliest day of the revolt in Kiev and, unlike many reporters, he wrote that the Maidan Square insurgents were largely from the Right Sector and Svoboda parties, both of whom have claimed that they were the leaders of the revolt against the ousted democratically-elected president, while Putin has been compared to Hitler (see Hillary C., our putative Democratic candidate for the Presidency).

‘The role of the fascistic right on the streets and in the new Ukrainian regime has been airbrushed out of most reporting as Putinist propaganda.’

“The role of the fascistic right on the streets and in the new Ukrainian regime has been airbrushed out of most reporting as Putinist propaganda,” Milne wrote. He then offends pro-Ukrainian/American policy makers:

By what right is the U.S. involved at all, incorporating under its strategic umbrella a state that has never been a member of NATO, and whose last elected government came to power on a platform of explicit neutrality. It has none, of course — which is why the Ukraine crisis is seen in such a different light across most of the world. There may be a few global takers for Putin’s oligarchic conservatism and nationalism, but Russia’s counterweight to its imperial expansion is welcomed from China to Brazil.

He may sound like an unreconstructed Red to our home-front warriors, but at least he was there when it all unfolded.

And then there’s Noam Chomsky, controversial but often prescient about many crises (East Timor, Vietnam, Israel and Palestine, etc. ) and usually persona non grata in our mass media. Writing in the small circulation and left-wing In These Times, he returns to a distant, more optimistic, era when Gorbachev, then the post-Communist president, agreed to the reunification of Germany and its inclusion into NATO, but with a quid pro quo.

The U.S. said NATO would not move “one inch eastward,” meaning east of East Germany. The pledge was soon broken by the U.S. and NATO, a direct challenge, and when Gorbachev protested, Chomsky says he was turned away, the U.S. telling him that “it was only a verbal promise, so without force.”

Please, can anyone in Washington’s celebrated if mute press corps ask Obama, Kerry, or John McCain, our resident senatorial hawk, about this the next time they hold a press conference? If need be, they can read John J. Mearsheimer in Foreign Affairs, and The Atlantic’s Jeffrey Taylor, based in Moscow, whose perceptive “The Way Out of the Ukraine Crisis” is worth reading. Or Brown University’s Slavic Studies Professor Vladimir Golstein’s “Do We Have to Destroy Ukraine In Order To Save It?”

Meanwhile, the Ukrainian mess festers. Washington, NATO, and Putin certainly know that nuclear war is the nightmare that awaits future provocative acts such as inviting Ukraine to join NATO setting off another Cold War and the pressure by Washington and Moscow hawks to “do something.”

There is only one way out of this. Patient, deliberate, nonviolent diplomacy. Hans-Werner Sinn’s WSJ article proposed inviting Russia and Ukraine into a free trade pact with the West, a sort of “change through rapprochement” once put into practice by Willy Brandt with East Germany. Or neutrality for Ukraine, unattached to any one side, as outliers like the anti-neocon The American Conservative proposed and which Col. Lawrence Wilkerson, once the chief aide to Secretary of State Colin Powell, seconded, while warning hotheads in Washington and Moscow to cool it since two major nuclear powers are involved. “Otherwise, they” — and all of us too — “are going to regret it sorely in the future.”

In the end, there’s always the indefatigable William Pfaff in the Times’s International Herald Tribune (for some inexplicable reason its New York owner doesn’t run his columns). Still, Pfaff often has the last, smartest words:

In all, it doesn’t seem quite the time for either side to turn this virtual war in Ukraine into a real one. One hopes that the advisors of both Presidents Obama (including Joe Biden) and Putin have grasped that. But probably one group or the other has not. It’s an old army maxim, explaining disasters, that “there’s always 10 percent that didn’t get the word.”

And now back to van den Heuvel and Cohen: Any skeptics out there?

[Rag Blog contributor Murray Polner is the author of Branch Rickey: A Biography; No Victory Parades: The Return of the Vietnam Veteran; and, with Jim O’Grady, Disarmed and Dangerous, a biography of Daniel and Philip Berrigan.]