MUSIC : David Crosby Not Shy About Which Side He’s On 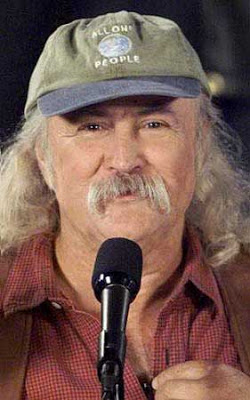 ‘Barack has dignity and moral values, and I believe he loves his country.’
By Ricardo Baca / August 22, 2008

It’s hard to believe, but David Crosby, an artist celebrated for his liberal activism as much as for inspired songwriting, will attend his first-ever Democratic National Convention, in Denver next week.

“Usually the people who try to get celebrities to come around to conventions and stuff want bigger ones than me,” Crosby said via telephone from his Santa Barbara, Calif., home earlier this week. “They want Jennifer Lopez or something.”

And mind you, Crosby won’t attend the convention itself. He’s going to the Buell Theatre to play an etown show Tuesday with buddies Graham Nash, James Taylor and Ani DiFranco.

“I don’t like most politicians, so I don’t see what the attraction is to go and be in the middle of a bunch of them,” Crosby said. “I’m definitely not going to the convention. I’m going to etown. I have a very high opinion of etown. They’re good people, and they do really good work. And I don’t think you can say that about most politicians.”

What about the dude getting ready to accept the Democratic nomination?

“I think he’s a very encouraging guy, a very intelligent man — which is, of course, a complete 180 degree shift from where we’ve been the last eight years,” Crosby said. “The idea of having a guy who can speak in complete sentences is extremely attractive. Barack has dignity and moral values, and I believe he loves his country.”

Crosby is just one of many musicians making their way to the Mile High City in the next 10 days. Conventions have grown into media circuses where entertainers and politicos share the same ground for a few days. It’s going to be an incredibly busy music week in Denver with performers as varied as Willie Nelson and the Black Eyed Peas, Fall Out Boy and Rage Against the Machine, Daughtry and Melissa Etheridge, the Blue Scholars and Silversun Pickups, Moby and Ted Leo and the Pharmacists — and maybe Dave Matthews, Kanye West and Bruce Springsteen.

While some bold names will be in Denver all week — playing this party, getting spotted at that party, hobnobbing at another party — Crosby is fine with getting in and out.

Crosby understands the weight of the current presidential race, not to mention the great divide in America today. There’s a scene in the recent Crosby, Stills, Nash & Young documentary, “Déj… Vu,” that films angry fans leaving in the middle of a CSNY concert in Atlanta as the group spoke against President Bush and sang songs such as “Let’s Impeach the President.” The group knew their political views would make an impact in the South, and that’s why they were filming it for the documentary, but they didn’t know the reaction would be so severe.

“When you look at the people, the ones who were disgruntled, they’re not the people who I really give a (expletive) about,” Crosby said. “Truth is, it’s good to stir things up. It’s good to make people have a dialogue with each other, even if it starts out with people yelling and pointing fingers.”

When asked about the dichotomy of an artist-fan relationship — they love your music but not your personality or politics — Crosby changed his tune a bit.

“I do give a (expletive) about them, but I think they’re kind of funny when they come to a CSNY concert and get mad about there being politics,” he said. “I don’t have a lot of sympathy for them. We’ve been probably the most political band in the world — or at least one of them. Anybody who comes to a concert of ours and expects us to not be anti-war and pro-human and anti-George Bush is crazy. They should have gone to a different concert.”

1 Response to MUSIC : David Crosby Not Shy About Which Side He’s On