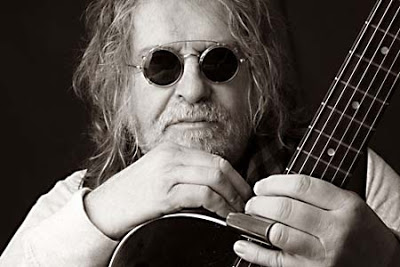 From the beats of the opening bar of the opening track you can tell that Ray Wylie is in a mood to groove right through this millennial year of long reputed doom.

So there I was hearing nothing but this wicked whirring Bandit Model Whole Tree Chipper rammed up against a load of Bibles, books, old newspapers, and brown-paper-covered magazines piled high as the Davis Mountains being scooped up and fed to the chipper by a Cat Ultra High Demolition Hydraulic Excavator.

And with the backup alarm blaring from a 469 horsepower Segmented Ejector Truck moving relentlessly into loading position I was finally able to focus my attention on the dusted vinyl lettering that marked every piece of equipment as the property of Ray Wylie Hubbard, Unlimited.

Because when you tune into the opening tracks of Hubbard’s freshly released Grifter’s Hymnal (2012: Bordello Records) you can’t help but thrill to the sound of re-shredding everything you thought you knew.

From the beats of the opening bar of the opening track you can tell that Ray Wylie is in a mood to groove right through this millennial year of long reputed doom. After all, there’s nothing at risk if your gods are archaic enough to come from places that can’t be undone. And all powers of such antiquity have something to say about eternal slyness and the essence of trickery that goes by the name of existence.

Go ahead, I dare you, roll tape, then see if you don’t start smiling right away, finding yourself snakebit before you hear the first warning rattle.

Mirothane is one word you might study up on in preparation for track number one. As defined by its inventors at Mirotone.com, Mirothane PU (TM) is a “flexible sealer with good clarity, superior chemical resistance and resistant to white marking under sharp impact.” Might be a sign of Hubbard’s acquired taste for custom interiority. Might not.

By the time we get to track two, we’re tuned up, warmed over, and rockin’, but not at one of those smokeless, sober, early venues like the kind they put Hubbard through at SXSW. No, no. Here we are full tilt throttled for that wide open midnight threshold where everybody grabs everybody else and jumps into the future unknown, crossing over into some other life that may or may not catch you just in time. Yes, yes.

Then, long after the midnight hour, some random mirror catches you reflecting on life and death. And if you’ve been reading Gloria Anzaldua lately, you’ll have some additional enrichment to draw upon as Wylie Hubbard sings in track number four about life up against the memory of Lazarus, who only died twice, not five times like Gloria did.

Track four finds us lighting up and looking around on “New Year’s Eve at the Gates of Hell,” somewhat like Dante, finding all these familiar faces and refusing to be all that repentant about it. So another year comes and goes and we’re still looking at all the souls who haven’t yet been sorted where they’re supposed to be. As our judgment turns on its own temper, lookout Ma, ain’t nothin all right now.

Nahuatl poetry is what you might be thinking about while you’re listening to track number five. Indigenous juxtapositions of beauty and death. The song is called “Moss and Flowers” so you have to know that if eternity is what you’re after then it’s not the kind of eternity that can be measured with an infinity of clocks. You get a very nice experience of duet here, with the harmonies on the guitar parts split between the buds of your Skullcandy (TM). 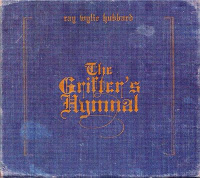 While speaking of death, “Red Badge of Courage” takes us into war zones of the mind where we have sent our kids these past decades. Somehow, you know the song already. It’s just a matter of hearing it played for the first time. Track six is an excursion into protest music, with the weariness of our war habits sounding deep down.

“It’s unbelievable” is how I want to sing the opening stanza of track seven’s “Train Yard,” and we are indeed treated to an unbelievable metaphorical trip involving a red hot penny. Even the great Yeats would nod to the greatness of this hot penny poem, looped in the loops of its steam-powered grip.

“Coochy Coochy” is a plain song of desire with a profoundly felt absence of the one thing that makes everything else sweat. It’s a fun song, simple, and I reckon it may begin to replace “Snake Farm” as a crowd sing-along favorite the next place Ray Wylie Hubbard plays. One more sing-along song is not surprising from Mr. Hubbard who, as we say in Texas, writes sing-along songs, “so well, so well, so well.” Thing is, this sing-along song was written by Ringo.

If we find ourselves lost in a mood for another Hubbard Mother song, track nine is called “Mother Blues.” It’s the longest track on the album and may be properly styled epic. The thing about Hubbard’s Mother songs is you can’t help but find yourself laughing from the gut. You may want to get yourself checked for hernia after this track, and if a professional is unhandy, perhaps a lay practitioner will have to do.

The genre that Hubbard works in is listed on my iTunes spreadsheet as “Country,” so you’ll not find it out of place for Mr. Hubbard to sing a little song about a rooster, some chickens, foxes, a blackbird, and the way truth stains our memories like wood. The song is called “Henhouse,” but the whole family is here, including a grandpa with Dixie roots.

The blackbird from “Henhouse” reprises its appearance in track 11. “Count My Blessings” is a song that weaves a grifter’s autobiography with reflections on the death of Sam Cooke. The grifter assures us that three card monty is a lucrative occupation if you keep the game moving fast enough. And the grifter somehow can’t forget how the jury acquitted Sam Cooke’s killer in 15 minutes flat. In such a fast-paced world, an ironic sense of gratitude can some days help a living body try to get by.

Pretty much everything I know about country music is what I’ve learned from Willie Nelson shows, so when country music concerts end with gospel tunes I think of young Willie playing honky tonks all night Saturday and then staying up to play church Sunday morning. Somewhere the line between Saturday night and Sunday morning gets crossed, you might say.

So when Ray Wylie Hubbard ends this Dionysian romp with a song about God’s light, it’s like we’ve all stayed up through sunrise. To our day-people’s routines we have been re-delivered. Nor have we forgotten to tip the night people for the things they come to do.

[Greg Moses is editor of the Texas Civil Rights Review and author of Revolution of Conscience: Martin Luther King, Jr. and the Philosophy of Nonviolence. His entries on King and Racism appear in the Encyclopedia of Global Justice. He can be reached at gmosesx@gmail.com. Read more articles by Greg Moses on The Rag Blog.]