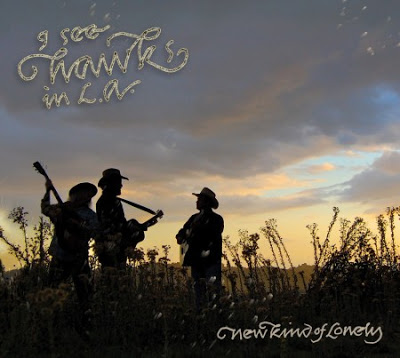 I See Hawks In LA create music that might best be described as a twenty-first century manifestation of that high lonesome sound first introduced to the world by Bill Monroe.

Imagine yourself in a small cabin in the mountains north of Santa Cruz, California. There’s a small fire burning in the stone fireplace just warm enough to burn away the Pacific fog creeping through the space underneath the door. People are gathered in the main room. Some are tuning their instruments, others are twisting up a reefer or two, and still others are pouring pints of home brew. Everybody gets settled and the picking begins.

That cabin, that scene, is where the latest disc from the California band I See Hawks In LA takes me. This CD, titled New Kind of Lonely, is their fifth release (sixth if you include their “hits” collection) and, in a departure from their other work, is performed solely with acoustic instruments. Foregoing their electric guitars and pedal steel, I See Hawks In LA have turned in a solid piece of work that simultaneously enhances and expands their singularly exquisite sound.

Not quite country, not quite rock, I See Hawks In LA create music that might best be described as a twenty-first century manifestation of that high lonesome sound first introduced to the world by Bill Monroe and other bluegrass pioneers.

This CD, given the fact of its entirely acoustic performances, emphasizes that link to the lonely hollers of Southern Appalachia that one hears in songs like “Blue Moon of Kentucky,” “Uncle Pen,” or “I’ll Fly Away.”

The difference lies in the song’s topics. Instead of Kentucky, Jesus, or moonshine, New Kind of Lonely includes songs about painter Mary Sky Austin, the Grateful Dead, and weed. Unlike previous releases, the songs here tend toward more personal situations; personal situations that represent a life outside the mainstream.

The opening song is titled “Bohemian Highway,” and the listener then travels this highway while being entertained with tales from the outlands of California’s bohemia. It is a bohemia birthed in the hippie/freak culture of the 1960s and 1970s and still celebrated in song, literature and some folks’ daily lives.

Like the best fiction emerging from this metaphysical realm (Vineland by Pynchon, Already Dead: A California Gothic by Denis Johnson), there are also warnings of the dangers one might find in a culture that accepts drug use and drifting as aspects of its essence.

Certain vocalists are instantly recognizable. One of those singers is the aforementioned Bill Monroe. Others include Jerry Garcia, Bob Dylan, Neil Young, Mahalia Jackson, Bonnie Raitt, and Leonard Cohen, to name just a few. The vocals of I See Hawks In LA’s Rob Waller fall into this category. The smoothness of his delivery (unlike Dylan or Young, whose singing is anything but smooth) does not muffle its sweetness or singularity. There are songs of joy and songs of warning. Songs about wandering and songs about getting hitched.

The key to I See Hawks’ is their playing. This acoustic masterpiece features plenty of incredibly adept, pleasing, even achingly beautiful guitar playing. There are not enough superlatives to describe it. Indeed, it could stand on its own if the vocals did not exist. When one adds the fiddle playing of Gabe Witcher (Punch Brothers), the sound becomes sublime.

In the past, I have tried to summon musicians that I See Hawks In LA reminds me of. While not an easy task because of their genuinely unique sound, Gram Parsons, New Riders of the Purple Sage, and The Byrds have come into mind.

This release has reminded me of another. Back in the 1970s there was a group that hailed from Kentucky and Arizona called Goose Creek Symphony (they returned in the 1990s and still perform). Their sound was a combination of rock music, clogging, horns, fiddle music, and just plain awesome picking. Every once in a while their music became something as celebratory as a group of old timers celebrating their latest batch of likker.

You feel so good; you just have to kick up something.