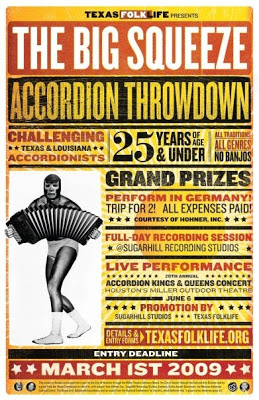 AUSTIN — Texas Folklife and Hohner, Inc. have announced the third annual Big Squeeze accordion contest for up-and-coming musicians in Texas and Louisiana. The contest was started in 2007 as a way to promote the growth and development of young accordionists in the region.

Any genre of music, including Cajun; German, Czech, and Polish polka; Tejano; Western; and Zydeco; to name a few, that incorporates the use of the accordion will be accepted and all are encouraged to apply. Finalists will perform at Texas Folklife’s highly acclaimed Accordion Kings & Queens concert at Houston’s Outdoor Miller Theatre on June 6, 2009, where the Big Squeeze winner will be announced.

“The Big Squeeze contest allows us to fulfill our mission to preserve, promote, and celebrate Texas culture in a very real way,” said Texas Folklife Executive Director Nancy Bless. “By supporting these young musicians we hope to encourage them to continue playing the accordion, an instrument that is central to Texas traditional music. It is gratifying to help inspire a younger generation of musicians, literally put them on the stage, and help assure the future of ‘the national instrument of Texas.’”

Texas Folklife is a statewide non-profit organization dedicated to presenting and preserving the diverse cultures and living heritage of the Lone Star State. For nearly twenty-five years, Texas Folklife has honored the authentic cultural traditions passed down within communities and explored their importance in contemporary society. Texas Folklife has been called “one of the state’s true cultural treasures” by the Austin American-Statesman for the accessible, joyful arts experiences we provide.

Thanks to Marty Manning and Joe Nick Patoski / The Rag Blog