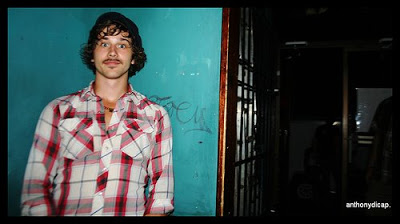 John Gourley of Portugal. The Man. Photo by anthonydicap.
Palin. Because we don’t need it.
September 4, 2008

So, the MOST famous person from Wasilla, Alaska is GOP Vice Presidential candidate Sarah Palin. But, RIGHT behind her are Wasilla natives John Baldwin Gourley and Zachary Scott Carothers, two members of indie-rock band Portugal. The Man, who, in its four-and-a-half-star review of the band’s new album, “Censored Colors,” Alternative Press called “one of the truly great bands of this generation.”

John Gourley has just posted a blog on the band’s website where he writes a passionate and touching essay about HIS Alaska, what is a TRUE Alaskan, and why we, the American people, don’t need Sarah Palin.

Gourley and Carothers grew up in the tiny town of Wasilla, fishing, hiking, and playing music together. Gourley and his hippie parents lived outside of town in a remote log cabin that was powered by a generator and had no phone. His mom and dad, a team of dog sled mushers, ran Alaska’s annual Iditarod, dubbed the “last great race on earth.” And Carothers remembers his frequent banter with Palin, then Wasilla’s Mayor, about building a town skate park (never happened). Gourley and Carothers’ families still live in Wasilla, and both return home whenever their touring schedule allows. Gourley has said that Alaska, with its breathtaking, ice-filled landscapes, has had a huge impact on the band’s music.

With their third album, “Censored Colors” set for release September 16, and their fall U.S. headline tour kicking off October 14, the critically-acclaimed blusey/folkie/indie/progy/poppy rock band has been making their own mark in the Lower Forty-Eight. Cutting-edge media, from Filter to Absolute Punk to Alternative Press to theTripwire have raved about the band, and put P.TM in some pretty heady company, comparing their music to the music of artists like the White Stripes, the Mars Volta, Jeff Buckley, Led Zeppelin and even the Beatles.

Sarah Palin. Because we don’t need it.

“Because we don’t need it” was something that has been taught to me every day of my life through these amazing people and to watch Sarah Palin get so much attention based on what? 2 years as Governor of the State of Alaska? Or is it based on her time as the mayor of Wasilla? The town of 5,000 at the time.

“Because we don’t need it.”

We don’t need drilling in some of our most beautiful and untouched land. We need to work towards options. We should be investing and working towards clean fuels. We don’t need to be draining our planet of every last drop before moving on to the next. Sarah Palin disagrees

We needed votes to add the polar bear to the endangered species list. (I know, I know, that polar bear rug would really bring the room together!). Sarah Palin disagreed

We don’t need aerial hunting… Again. We do NOT need this. I don’t know of any true Alaskan that feels it is good sport to shoot an animal from a plane. Sarah Palin disagrees

We don’t need book burners and censors. Sarah Palin pushed to get the librarian of Wasilla fired when certain books were not removed from the public library. Who else in history has banned books? Not very good company is it?

We don’t need family feuds interfering with duties. I know you feel your ex-brother-in-law was a dick… but trying to get him fired based on this may cause a little trouble. Sarah?

We don’t need another vote against gay marriage. This is just standard every day equal rights being overlooked. Sarah Palin disagrees.

We don’t need to overlook global warming. Science can now tell us “Yup. That is happening.” Not my words, that is science speak. Sarah Palin disagrees.

We don’t need a wolf in sheep’s clothing… or a sheep in wolves clothing, depending on how you look at it. She has billed her self as this overly average “hockey mom” and it is just not what I see. I see the sport hunter, the censor, choice taker, the revelations reader, and the high school cheerleader. It is endlessly embarrassing to watch people fall all over this idea. This is not my Alaska. The Alaska I know.

[Read John Gourley’s full story of his first hunting trip in which he didn’t shoot the moose because “we don’t need it,” at Portugal. The Man]