Here’s an example of neglecting refusing to try a worthy New Years’ resolution, instead kicking off 2009 with the status quo. This article shows that racism is still alive and well in America. 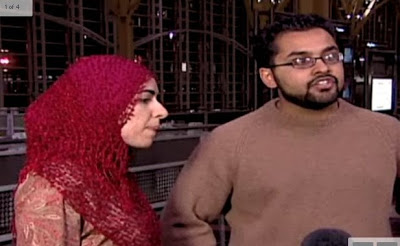 Atif Irfan, right, and members of his family were kicked off an AirTran Airways plane Thursday after other passengers overheard them talking about the “safest” place to sit on the plane. Irfan said it was just a general safety discussion, and the FBI cleared them of any wrong. But the airline refused to rebook them. Photo: CNN.com.
Muslims Kicked Off Plane Get Apology
By Brian Westley / January 2, 2009

One of the passengers said the confusion started at Reagan National Airport in Washington, D.C., when he talked about the safest place to sit on an airplane.

Orlando, Fla.-based AirTran said in a statement that it refunded the passengers’ air fare and planned to reimburse them for replacement tickets they bought on US Airways. AirTran also offered to take the passengers back to Washington free of charge.

“We apologize to all of the passengers — to the nine who had to undergo extensive interviews from the authorities and to the 95 who ultimately made the flight,” the statement said. “Nobody on Flight 175 reached their destination on time on New Year’s Day, and we regret it.”

The airline said the incident on the flight from Reagan National Airport to Orlando was a misunderstanding, but the steps taken were necessary.

One of the Muslim passengers, Atif Irfan, said the family probably would not fly home with AirTran because members had already booked tickets on another airline, but appreciated the apology.

Irfan said when he boarded the flight Thursday, he mentioned something to his wife and sister-in-law about having to sit in the back. His sister-in-law replied that she believed the back of the airplane was the safest, but Irfan believed it was better to be by the wings.

“She said, ‘Yes, I guess it makes sense not to be close to the engine in case something happens,” Irfan recalled Friday. “It was a very benign conversation.”

Shortly after taking their seats, members of the group were approached by federal air marshals and taken off the plane, Irfan said. They stood in the jet bridge connected to the airport and answered questions while other passengers exited and glared at them.

Irfan said he thought he and the others were profiled because of their appearance. The men had beards and the women wore headscarves, traditional Muslim attire.

“My wife and I are generally very careful about what we say when we step on the plane,” he said, adding that they have received suspicious looks in the past. “We’re used to this sort of thing — but obviously not to this extent.”

Irfan, 29, is a lawyer who lives in Alexandria, Va. He was traveling to a religious retreat in Florida with his wife, along with his brother and his family, including three children, ages 7, 4 and 2. They were joined by his brother’s sister-in-law and a family friend.

Federal officials ordered the rest of the passengers from the plane and re-screened them before allowing the flight to depart about two hours behind schedule. The family and friend eventually made it to their destination on a US Airways flight.

Family members were upset that AirTran didn’t allow them to book another flight. The airline said in a news release Friday that one of the passengers became irate, made inappropriate comments and had to be escorted away from a gate podium by local law enforcement.

“We felt very disrespected,” Irfan said. He said FBI agents had cleared their names and asked AirTran to put them on another flight, but to no avail.

White said the pilot, after being informed of the remarks, requested that two federal air marshals on board remove the nine passengers. TSA then alerted authorities, including the FBI, which conducted an investigation. Once authorities determined there was no threat, it was up to the airline whether to allow the family to reboard.

“If the pilot is uncomfortable with someone flying on their plane, that’s their decision,” White said.

Discount carrier AirTran Airways is a subsidiary of AirTran Holdings Inc. Its hub is in Atlanta.

This entry was posted in RagBlog and tagged Discrimination, Homeland Security, Racism, Travel. Bookmark the permalink.